The green goliath reunites with the Defenders, seeks help from The Leader, and more!

After The Sentry made an attempt to calm the savage Hulk in SENTRY: HULK #1, the jade giant joined with his Defenders comrades to smash their old foe Yandroth in DEFENDERS #1. Subsequently cursed by the defeated villain, Hulk and his cronies battled Pluto, Lord of the Underworld, in DEFENDERS #2, and with Valkyrie and Brunnhilde staved off an invasion by Hades itself in DEFENDERS #3-4.

Hulk wrote a letter to his deceased wife Betty in INCREDIBLE HULK #24, and squared off against the Abomination with revenge on his mind in INCREDIBLE HULK #25. Yandroth’s curse brought the Hulk back together with the Defenders in DEFENDERS #5 to fight the dreaded Headmen, and Bruce Banner found himself defusing a bomb in DEFENDERS #6. Later, the green goliath and his friends attempted to secure Namor’s throne for him in DEFENDERS #7, but the curse set them on a path to confront Hell-Eyes instead. 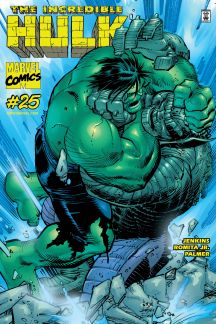 When the Defenders sought out their compatriot The Silver Surfer in DEFENDERS #8, they tumbled into an adventure with the Kree in deep space while the Headmen caused trouble back on Earth. Upon their return, the non-team fought the monstrous Orrgo the Unconquerable in DEFENDERS #9, as well as the Headmen and M.O.D.O.K. in DEFENDERS #10.