The jade giant and his family enlist in the Chaos War, face Fear Itself, and more!

On the far-off planet K’ai, Bruce Banner and his son Skaar reeled from what they’d discovered in INCREDIBLE HULKS #616: Hulk’s other son, Hiro-Kala, intended to drive the entire world into Earth to stop an ancient power. With the help of the Worldmind, Banner and Skaar stopped him in INCREDIBLE HULKS #617 and returned to Earth, though the scientist suffered from the loss of his offspring.

Following that, Hulk fought his way through Olympus in INCREDIBLE HULKS #621 to enlist Zeus’ help in the Chaos War, but when the king of the gods put down the jade giant in INCREDIBLE HULKS #622, it fell to Hercules and other allies to save him. Meanwhile, in the Savage Land, a member of Hulk’s Warbound, Miek, plotted revenge against his former leader. 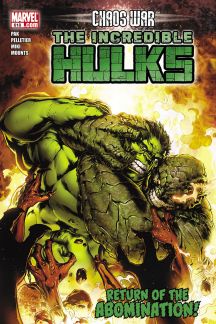 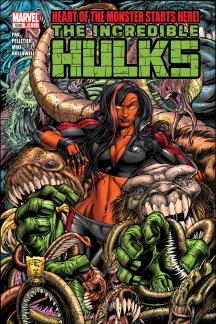 The Hulk became possessed by a strange hammer from the skies in FEAR ITSELF #1. Now called Nul and under the command of Odin’s brother The Serpent, he battled the mighty Thor in FEAR ITSELF #4 alongside a transformed Ben Grimm, and even managed to seriously wound the thunder god in FEAR ITSELF #5. Through the efforts of Tony Stark and other heroes, Hulk found himself freed from Nul’s influence in FEAR ITSELF #7. He subsequently freed himself from Bruce Banner, somehow forcing an actual bodily separation from his alter ego.

Once again alone, Hulk hid out in an unknown, underground Moloid village in INCREDIBLE HULK #1, until called into the light to fight a new menace…