It’s the final chapter in our look back at the Green Goliath!

A new Hulk surprised Spider-Man and She-Hulk in TOTALLY AWESOME HULK #1 as they fought an alien menace called Lady Hellbender. When the green giant revealed himself as Bruce Banner’s genius friend Amadeus Cho, the story of how he cured the scientist of his hulking alter-ego with special nanites began to come out, and by TOTALLY AWESOME HULK #4, the legacy of the Hulk seemed fully in Cho’s hands.

Banner tested his cure in TOTALLY AWESOME HULK #7 by exposing himself to dangerous and stressful situations, but failed to transform into The Hulk. Tony Stark arrived to make sure the original Hulk stayed away, and he left after taking the scientist at his word. 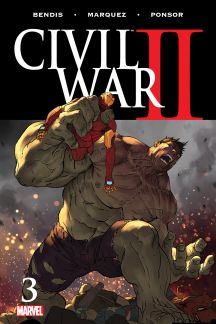 Banner’s cousin Jennifer Walters went down hard in CIVIL WAR II #1 from wounds sustained in a battle with Thanos, while a new Inhuman, Ulysses, took possession of the power to see visions of the near future. One of these visions involved The Hulk killing Earth’s heroes in a bloody rage, and in CIVIL WAR II #2, Ulysses relayed that horrible picture to the future victims.

Captain Marvel flew off in a flash to confront Bruce Banner at his secret lab in CIVIL WAR II #3, with Iron Man only seconds behind her. A debate ensued over whether or not to do something about the scientist before he transformed or wait to see if he would. Banner insisted his days as a Hulk lay behind him, but before anyone could settle upon an answer to the moral question before them, Hawkeye killed the former jade giant with a special arrow. 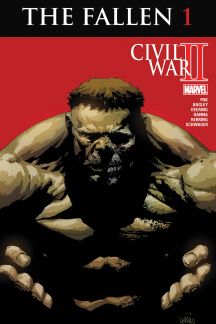 Former comrades of The Hulk attended Bruce Banner’s funeral to pay their respects in CIVIL WAR II: THE FALLEN #1, and watch a video will of the scientist’s as Hawkeye awaited his trial for the murder. Clint Barton claimed that Banner himself asked to be put down by the archer should he seem to be on the verge of “hulking out.” In CIVIL WAR II #4, She-Hulk awoke from a death-like coma to learn of both Banner’s death and Hawkeye’s acquittal by a jury.