Everyone deals with the loss of a teammate differently in Brian K. Vaughan's last RUNAWAYS arc.

Betrayal and death seem to have followed the RUNAWAYS stars since their inception. First their parents turned out to be wannabe world-conquerers, then their best friend and leader sided with them and, in the last arc, they lost their heart and soul, Gert, to a battle with a time-displaced Geoffrey Wilder.

In RUNAWAYS #19-24, Brian K. Vaughan, Adrian Alphona and Mike Norton showed how the kids all dealt with this ranging from Nico and Victor starting some kind of relationship to Chase angrily trying to find a way to bring her back. As if all that didn’t offer enough of a challenge, they also found themselves dealing with a giant monster crashing its way through downtown L.A. 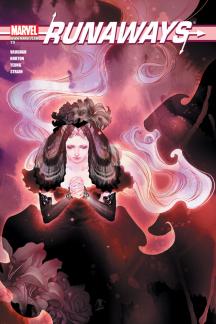 As his teammates fought the big red beast, Chase tracked down New Pride member Lotus and demanded she tell him how Wilder gained access to the Gibborim. The young man soon found himself standing before the six-toed behemoths and struck a deal. If he brought them an innocent soul, they’d bring Gert back. However, he only had a short amount of time to do so before the Gibborim retreated to another dimension.

Convinced that he could offer himself as an innocent sacrifice, Chase returned to the Hostel to clear a few things up. First he talked with Nico – after tying her up and taking her magic staff – then he gave her ways of taking out Victor if he turned evil.

With that he left to make his sacrifice, but his friends weren’t far behind. Ultimately, their efforts to back their friend proved less effective than Chase’s plan and the Gibborim’s ticking clock. See, upon offering himself as the innocent soul to be devoured by the big baddies, he would immediately stop being innocent.

Of course, that didn’t sit well with Chase, but he also wouldn’t stand for the Gibborim taking Nico as their sacrifice. Ultimately the young friends proved strong enough to not only save their leader, but also spend enough time doing so, so that the monsters had no choice but to return to their own dimension.

Vaughan and Alphona bid readers a fond adieu with a pair of surprise endings. First, Alex Wilder floated in a white space where the Gibborim wound up. He had communicated with Molly throughout the story, but that wasn’t enough to get him out of that particular version of Hell. Meanwhile, back in reality, the remaining Runaways returned to the Hostel where they found a surprise: Iron Man waiting to register them! 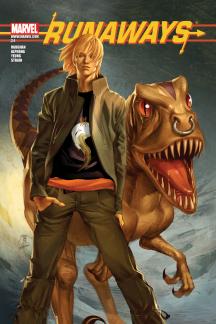 Very little is known about the Gibborim and even less can be confirmed. When the original Pride came together, the mystical giants offered them paradise in exchange for a pure human soul to feed on every year. Once the Pride’s children interfered with the rite, things started going downhill, leading to the Gibborim blowing up in their underwater stronghold. As we now know, though, they shifted into another dimension, where Geoffrey Wilder and later Chase met with them. Having run out of time at the end of this arc, they disappeared, winding up in the same white dimension as Alex Wilder.

While this isn’t confirmed, it’s possible to look at the Gibborim as the Runaways’ opposites. They reference a father figure a few times, which might mean that, unlike our title heroes, they decided to stick with the family business and look where it got them. With Alex’s last line of “Hell is for children” it could also be theorized that the Gibborim were children themselves, relatively speaking, which means they may have had more in common with the Runaways than anyone expected.