Get Ready to Run: Rock Zombies

Terry Moore and Takeshi Miyazawa pit the kids against a new kind of zombie.

Looking past the whole thing where their parents turned out to be crazy murderous super villains, the gang seemed like they had a pretty good handle on their lives in RUNAWAYS #7–9. Chase got a job that he actually liked while the rest of the gang got to hang out in Malibu. That is until the plastic surgery zombies hit thanks to Terry Moore and Takeshi Miyazawa!

Last week we mentioned that Chase’s gig as a shock jock’s assistant would probably lead right into this particular adventure and that’s how it went down. Vic Rhymin met with a local wizard dubbed Mother and they hatched a plan to turn everyone who had plastic surgery in the L.A. area into a living zombie! 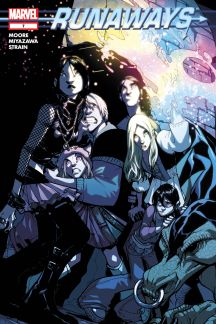 Nico, Molly, Karolina, Chase, Victor and Klara literally drove into this kind of madness after spending a night camping out in the desert. While confronting a horde of these strange creatures, Nico let loose with a spell that got turned around and, instead of stopping the attack, literally brought a group of monsters into one giant amalgamation. 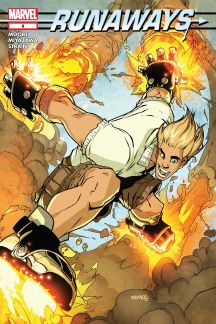 After finally figuring out how to separate the individuals, the kids took off to find Val and stop all this madness. Their first stop, the radio station, proved less than helpful so they then traveled to the midnight concert where Val had ordered the zombies to bring him riches!

Once Val took the stage, the kids leapt into action with Nico facing off against Mother, who used to work with her parents from time to time. Mother thought he got the jump on the young woman and took the Staff of One, but a dinosaur erupted from it and ate him. Meanwhile, Chase found the mobile radio truck and played the song backwards to get everyone to return to normal! 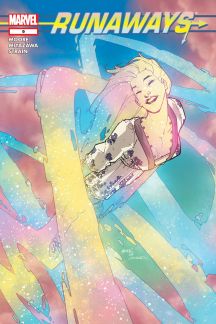 RUNAWAYS #10 featured a different format with a pair of stories. The first, by Chris Yost and Sara Pichelli, saw Molly responding to Cyclops’s call back during the Manifest Destiny era when the mutants set up shop in San Francisco. While she took a tour of the facility guided by Wolverine, her teammates met the New X-Men. Instead of throwing down, they all went to a club and had a great time. Well, not Molly and Wolverine, they fought one of her parents’ old enemies and had to face some serious truths about her folks.

James Asmus and Emma Rios also created a story where the kids played Truth or Dare that resulted in them battling a giant snake monster accidentally conjured up by Nico.

Close out this volume of Runaways with the new creative team of Kathryn Immonen and Sara Pichelli.