Get Ready to Run: The Good Die Young

The first Runaways arc ends in betrayal, destruction, and murder!

Take off with the Runaways from the beginning as we ramp up for Rainbow Rowell and Kris Anka’s new series launching on September 13 and “Marvel’s Runaways” premiering on Hulu November 21!

Writer Brian K. Vaughan and artist Adrian Alphona sent Alex, Nico, Gert, Molly, Chase, and Karolina out with a bang as the first volume of RUNAWAYS came to a shocking conclusion.

The kids felt pretty pumped after the previous arc, as Cloak and Dagger promised to help them upon their return to New York, though they never did; the team remained  unaware that the Pride intervened and wiped Ty’s and Tandy’s minds, leaving the kids stuck in their ongoing predicament.

The Runaways did get some more dirt on their folks, though, as Alex figured out how to translate the Abstract, which explained how each of their parents started out and what brought them to the Gibborim in the first place. More importantly, they learned that the original deal with the six-fingered giants included the Pride working to destroy humanity in exchange for spots in a new paradise.

In the middle of this history lesson, a small army of police—including the Pride’s LAPD minion—raided the Hostel, sending the kids on the run once again. Adding to the already-heightened emotions, they also discovered that one of the members had been leaking information to their parents.

Distrust spread among the Runaways and their forebears, who had been working in secret to use different parent-child combinations to try and make it to the safe haven. With both groups looking over their shoulders, each decided to bring the whole enterprise to a close.

The Pride needed to attend the latest Gibborim meeting at the Marine Vivarium—2,500 leagues off of Santa Monica Beach. Knowing that they must bring everything down fast, the Runaways followed their folks below the waves and soon found themselves facing giant rock sentries and other oceanic threats.

The mission proved so dangerous that Chase almost died, but Gert used mouth-to-mouth resuscitation to save him. Chase then passed the Fistigons off to Alex, who led the group to face off against their parents. In the early stages of battle, Gert got knocked unconscious, but told Old Lace to follow Alex if anything happened to her instead.

Unfortunately for all involved, Alex stood revealed as the mole the entire time. Alex—so well-trusted by the rest of the group who never considered him a threat—wound up with all the cards—and the Staff of One—in his own gauntleted hand. 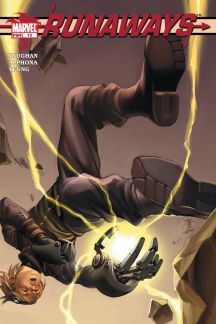 The rest of the Runaways didn’t take too kindly to this reveal and did their best to retaliate against their former comrade; Nico took the staff back and Gert regained control of Old Lace. That served as enough of a distraction for Chase, driving the Leap Frog, to crash into the room. During the fracas, Molly crushed the canister that held the sacrifice’s soul, upsetting the Gibborim even more.

In response, the giants flash-fried Alex, but, as they turned to do the same to the Pride, the kids jumped into the Leap Frog and exited the Marine Vivarium just as the place exploded. Though initially separated, the Runaways reunited at the James Dean Memorial at the Griffith Observatory, deciding to steal the Leap Frog and go out on their own once again.

Alex’s revelation that he’d been the Pride’s mole sent shockwaves through both his teammates and readers alike when the issue hit shelves in 2004. He appeared to be the heart of the group, not to mention a brilliant strategist and leader. So what happened? As he explained in RUNAWAYS #17, he actually discovered his parents’ secret murder ritual a full year before he “accidentally” exposed the other kids to it in their debut.

Alex conveyed that he gave them the benefit of the doubt, but still utilized his incredible mind to read the Abstract in his dad’s secret office. During this journey, he considered his parents heroes for going to such lengths to save their kids. After several members had children, the Pride agreed that they would each scion only one and would give them their spots in the Gibborim’s paradise. When Alex overheard Molly’s and Karolina’s parents talking about killing the others so that they could go with their children, he started planning to involve the other kids, allowing him access to better weapons and abilities. In doing so, he assumed that the traitors would come to light and he could save his parents’ lives without endangering them. In the end, his plan didn’t work as he had hoped.

Next, Brian K. Vaughan and Adrian Alphona return for the second volume of RUNAWAYS with “True Believers”!