Going Back in Time with Kang the Conqueror

Revisit the origin of the time-traveler as you read this week's 'Moon Knight Annual' #1!

In one of the least likely (but most exciting) throwdowns across the mighty Marvel Universe this week, Marc Spector's alter-ego takes on Kang the Conqueror in MOON KNIGHT ANNUAL #1!

In this ish, Cullenn Bunn and Ibrahim Moustafa bring the two seemingly incongruous characters together based on their shared ties to Ancient Egypt; Moon Knight has been tied to the god Khonshu since his early days and Kang was a pharaoh for a time!

That's right: Kang the Conquerer may have made his presence first felt in 1964's AVENGERS #8, but the character actually debuted the previous year in FANTASTIC FOUR #19.

In that Stan Lee-Jack Kirby issue, Reed Richards had been doing some research on the history of Egypt and theorized that one of the pharaohs had discovered a cure for blindness. Thinking that it might help Alicia Masters, the team traveled to Doctor Doom's then-abandoned castle and used his Time Platform to travel to the past! 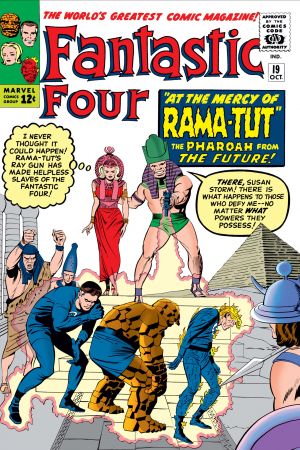 There, during a time that history seemed to forget, they encountered a group of anachronistic assailants who immediately attacked the team. Subdued and taken to their leader's throne room, the team was shocked to be spoken to in English and even more surprised to find out that the pharaoh, Rama-Tut, was also a time-traveler!

Their captor went on to explain that he hailed from the year 3000, which had widely established peace and prosperity. Bored and hungry for adventure, he took inspiration from historical videos of the FF themselves and began exploring. In his quests, he found plans for a time-travel device in an ancient castle that he used to build his own Sphinx-like chronal conveyance.

Upon crash-landing in Ancient Egypt, the man was blinded, but fired blindly at the nearby witnesses. In awe of his power, they made him their leader and even returned his sight with radioactive herbs.

Using his Ultra-Diode Ray, Rama-Tut managed to sap the Fantastic Four of their strength and kept them captive. Thanks to an unexpected transformation from the Thing into his more human form, Ben escaped his shackles and tipped a few dominoes, leading to their escape.

In the ensuing chaos, Rama-Tut took off in a time escape pod and the First Family returned home, but the time machine would not allow the radioactive herbs to make the journey. A few issues later, in FANTASTIC FOUR #23, Doctor Doom got launched into space—a plot point picked up in FANTASTIC FOUR ANNUAL (1963) #2 wherein Rama-Tut picked him up in his ship. 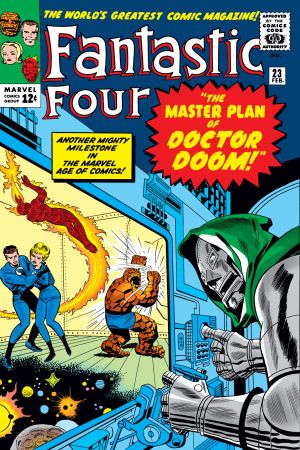 Once aboard, the two villains began comparing notes on their recent troubles with the FF and realized that they might be the same person from different points on their timeline! Not wanting to damage their futures or pasts, Tut sent Doom back to Earth and then got out of there.

That seemed to be the end of Rama-Tut until AVENGERS #8, also by Kirby and Lee, which found Kang the Conquerer traveling to the present in a space ship, proving his technological superiority and demanding a meeting with the world's leaders.

When the Avengers showed up, he displayed his real power and then explained that he was Rama-Tut. After meeting with Doom he intended to go back to 3000...but wound up in 4000! Rama armored up and quickly became the leader of the constantly warring savages.

Bored, the man now known as Kang decided to go back in time and challenge himself and take over the 20th century. The Avengers refused to let that happen, but were almost instantly captured. Butthanks to the quick thinking of Wasp, Rick Jones, and the Teen Brigade—not to mention Kang's own arrogance—the heroes managed to get free and stop the would-be conquerer, forcing him to flee to another time. 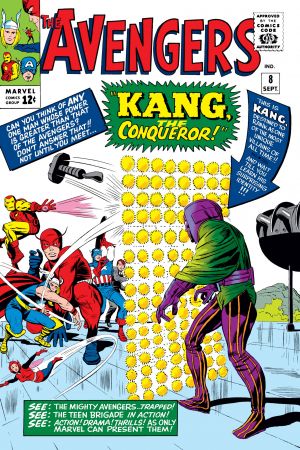 Since then, Kang has become a regular enemy of the Avengers, though his teen self also traveled back in time to become Iron Lad, a founding Young Avenger! Most often an antagonist, however, Kang continues to make trouble in this era and many others...just ask Moon Knight!

In this article: Kang the Conqueror, Marvel 80th Anniversary

Big, and small, things are happening in theaters February 17, 2023.

Jed MacKay and an all-star lineup of artists return with a new 'Timeless' one-shot this December.