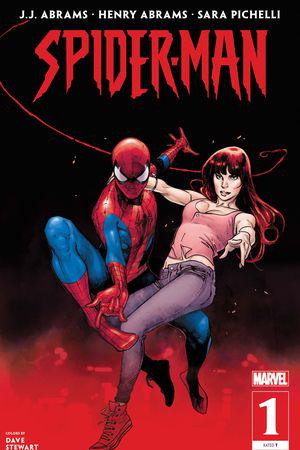 The introduction of an all-new foe, Cadaverous, “shows Peter Parker in a way you haven’t seen him before," said J.J. at the series’ release. And, for the dad-son duo, this run represents a chance to leave their stamp on a major Marvel staple. "Spider-Man is one of those Super Heroes where the more you read about him, for me at least, the less I understand him,” says Henry. “He’s so anti-everything that you’d expect from a hero.”

A father-son dynamic is mirrored in the series too. A tragedy from Peter Parker’s past has rendered him an entirely different man in the present, altering his relationship with his teen son, Ben.

We’ll let you see for yourself just how hard this issue hits. With a menace like Cadaverous though, expect the unexpected.

SPIDER-MAN (2019) also made our list of MUST-READ SPIDER-MAN RUNS, so check out issue #1, and let us know what you think of the rest of our picks at @MarvelUnlimited.

Plus, see what other titles we’ll be reading this week!

PICKS OF THE WEEK

The next chapter in writer Jonathan Hickman’s HOUSE OF X/POWERS OF X saga. Charles Xavier’s carefully laid dream becomes reality for some of his fallen children. Mutantkind is forever changed by this issue, and your viewpoint of the X-Men is likely to change too.

ABSOLUTE CARNAGE continues! Venom and Spider-Man get on Carnage’s level as the slayer of symbiotes amasses strength… and allies.

Vampires. Aliens. Angry fish kings. The Black Panther hand-picks agents to defend his nation against any and all super-powered threats. And who better to lead them than the king of the world’s most technologically evolved country?

Jonathan Hickman will team with legendary artist Alan Davis in GIANT-SIZE X-MEN: NIGHTCRAWLER #1, coming this Wednesday. Relive some of the swashbuckling mutant’s best adventures in this run by Chris Claremont and Todd Nauck. Kurt Wagner returns from the afterlife, but the world he reenters is a far cry from the one he left.

Get more backstory on the Resistance freedom fighter, including Rose’s relationship with her co-pilot sister, Paige.

Revisit this monumental issue from writer and artist Frank Miller’s run on Daredevil, re-presented in its original form, ads and all. Bullseye vs. Elektra—and only one walks away. Binge Miller’s entire run here.

See all of this week’s Marvel Unlimited titles here.

What will you be reading this week? Join the conversation with @MarvelUnlimited, and stay tuned to our Twitter and Facebook channels for more weekly announcements and updates.

The Sleeper Symbiote Claims a New Host in 'Venom' #11

Check out Sleeper Agent, a new symbiote character debuting in the pages of Al Ewing, Ram V, and Bryan Hitch’s 'Venom' this August.