Kirby 100: The Flames of Battle

Thor must team with Sif to battle Ulik, the trolls and an extra-dimensional being called Orikal!

One of the great things about the partnership between Stan Lee and Jack Kirby is that the duo didn’t take the easy or obvious way through a story. Take THOR #137–139 from 1967, for example. Most of the story revolved around the trolls scheming to take over Asgard while Ulik distracted Thor. That might seem fairly straightforward, but then we came to realize that the trolls had an extra-dimensional super powered robot-like being on their side called Orikal! 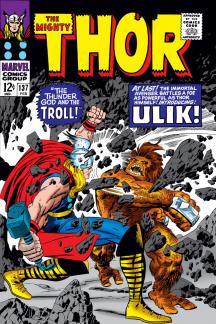 When last we saw Thor in KIRBY 100, he and Jane Foster had broken up but he’d been reintroduced to Sif who had grown up since last he saw her. The two showed off their warrior skills to one another, but that came to an end when a band of trolls attacked and made off with Sif!

Enraged, Thor gave chase, even entering the Under-Kingdom Of The Trolls, only to come face to face with a new, but legendary enemy: Ulik! While those two titans battled, the trolls gassed Sif and sent her to Earth so that Thor would follow and turn into Don Blake, giving them a chance to steal Mjolnir.

As Thor and Ulik battled, the Odinson realized quickly that his opponent’s might nearly matched his own! In fact, the troll eventually gained the upper hand and went to land a potential killing blow when he disappeared.

Thor played right into the trolls’ plans as he transported himself to Midgard right as the other trolls attacked Asgard. He even changed into Don Blake to more easily blend in. Since the trolls knew Thor’s alter ego, they tracked Blake and used a molecular disperser to snatch him from below the very streets of New York!

The trolls even managed to grab the walking stick, but couldn’t change it until Don tricked them into changing himself into Thor! That lead to another fight with Ulik. When Thor gained a moment’s rest, he stumbled across Sif’s prison. Distracted, he put his hammer down for a few moments, but enough time for the trolls to capture it in the Orb of Orikal. They ran off with the weapon leaving Thor to turn back into Don Blake as he did after not touching Mjolnir for 60 seconds.

Distraught over both losing his hammer and not being able to get back to Asgard to help his fellow Asgardians, Thor resorted to a dire plan: he intended to jump in front of a train after changing into Blake in hopes that his spirit would return home! However, Sif reminded him that she had power of her home and transported them both to Asgard, which also meant that Thor would not change back into Blake.

They made it just in time too because the trolls used the weapons provided to them by Orikal that not only helped them invade the shining city, but also steal energy away from Odin himself!

Instead of joining the main battle, Thor and Sif took on Ulik once again before entering the flaming prison that the head troll kept Orikal captive in. The Asgardians agreed to free Orikal from his fiery prison as long as he offered to leave their dimension forever! With their secret weapon – and weapon-maker – out of the picture, the trolls surrendered to plot their next invasion!

In this article: Sif

Check out an excerpt from the prose novel!

Get to know Asgard’s God of Mischief in some of his favorite forms!

What caused the Nexus Event on Lamentis-1?