Marco Checchetto on Fulfilling a Lifelong Dream of Drawing for Marvel

"I decided that one day, not only would I become an artist, but I would draw Spider-Man for Marvel."

Marco Checchetto, a rising star at Marvel, was born and raised in Italy, where he still resides. Before he worked on heavy-hitting Marvel titles like DAREDEVIL, he read Marvel Comics as a kid, beginning with the first one that was given to him by his grandmother. While his parents weren’t exactly thrilled about his ambition to become an artist, Marco persevered for years until he got his big break, drawing Spider-Man, one of Marvel’s most famous characters.

To date, he has collaborated with writers like Ethan Sacks and Chip Zdarsky, illustrating books like OLD MAN HAWKEYE and DAREDEVIL. Marvel.com caught up with Marco to discuss his own introduction to the world of comics and how he made a career in the medium.

When did you first know that you wanted to be an artist?

I was only seven or eight years old. My grandmother gave me a big story collection with very different characters, but only one of them caught my attention and that was Spider-Man. After reading this particular story, I decided that one day, not only would I become an artist, but I would draw Spider-Man for Marvel. I was only a child who dreamed!

What were some of your other introductions to the Marvel Universe?

I think it was the very first Spider-Man animated series (I love that series), but my first comics, as I mentioned before, was the story of Spider-Man in MARVEL SUPER-HEROES #14. After Spidey, my favorite comic books were X-MEN and DAREDEVIL. 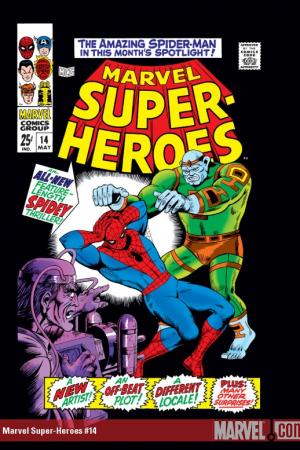 How did you navigate the journey toward your dream job?

I used to live—and still live—in a little village close to Venice, Italy. I wanted to attend art school but my parents and my teachers wouldn’t agree. They thought becoming an artist wouldn’t be a good choice [since there were] very little job opportunities and it was not even considered a proper occupation.

It was my parents who decided I should attend science school rather than art school, but this never stopped me from drawing for many hours a day in my free time. My parents were just afraid for my future, and they never hindered my path. They just wanted me to take both roads. There was no internet at the time, and being an artist for a foreign publisher was rather complicated.

Now I can say it was worth trying it.

While you built up your portfolio/artistic cred, what kinds of other work did you do?

While I was trying to become a comics artist, I did any kind of little job to allow myself to buy comic books and hang out with friends. I was a student at that time. I decided to attend university (and again, no arts studies!) just to leave the door open in case I wouldn’t succeed as a comic book artist.

Luckily, I made it!

How did you first get involved with Marvel?

I used to work for a Teenage Mutant Ninja Turtles series for children, produced and published only in Italy, when my editor asked me what I thought about creating the same kind of stories but with Spider-Man as the main character. I was so happy, I couldn’t believe it. The first step was to talk first with Marvel Italy and then to Marvel USA to see if it could be workable. I did a single sample page (pencil, ink, and colors) the night before the meeting with Marvel Italy. They then sent my page to Andy Schmidt in the USA, who was the editor of the X-MEN series at that time. Three days later, he called me to draw a Deadpool short story in MARVEL COMICS PRESENTS #10.

What do you feel like was the tipping point in your career as an artist? When was it (or what was it) that got you to this point of being one of Marvel’s rising star artists?

There was a precise moment when I realized I had improved as an artist, and that was my work on PUNISHER.

There were three main reasons: The first was [Editor] Stephen Wacker’s faith in me when he asked me to relaunch such an important series. I will always be grateful to Stephen for that. Working from Greg Rucka’s scripts also considerably improved my storytelling. It was a very hard school. And finally, moving on to digital drawing (on PUNISHER #5).

I hardly ever enjoyed inking my pencils. My inks ruined my pencils [and] I couldn't find the right tools. Working in digital allows me to work more precisely and with no limits whatsoever.

What do you love most about drawing for DAREDEVIL and OLD MAN HAWKEYE?

I love drawing sad and melancholic characters. You know, the kind of gloomy characters [who are like] gargoyles when it’s raining. Spider-Man is my favorite character, and the stories I like the most about him are his sad or tragic stories. Daredevil is like Spidey, but his stories are always gloomy and gruesome. Old Man Hawkeye revels in that kind of atmosphere, even though he is in the middle of a sunny desert.

I am a happy and smiling person, and I love sharing time with my friends, but when I’m working, I like sadness and darker tones. I’m so lucky to work with writers like Ethan Sacks and Chip Zdarsky.

Marco Checchetto returns to DAREDEVIL, written by Chip Zdarsky, in DAREDEVIL #11, on sale Wednesday, September 11! Pre-order your copy today, online or at your local comic shop!

To read more about Marvel’s stable of up and coming artists, stay tuned to Marvel.com!