Marvel and Lexus’ Black Panther: Soul of a Machine Released as Motion Comic

Black Panther, Shuri and their allies face off against Machinesmith in this special story.

Last year, Marvel and Lexus partnered for the special series BLACK PANTHER: SOUL OF A MACHINE, and fans can now enjoy the story in an exciting new way with the release of a motion comic version, which includes the addition of sound effects and music.

In BLACK PANTHER: SOUL OF A MACHINE, when the cybernetic artificial intelligence, Machinesmith, infiltrates all of Wakanda’s systems, the very existence of human civilization is threatened. It is up to six Wakandan science apprentices and six Takumi Masters, working with Black Panther and his sister, Shuri, to create the ultimate machine to stop Machinesmith’s flawed, but deeply felt, vision for integrating man and technology into harmonious perfection. 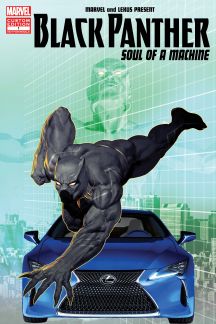 BLACK PANTHER: SOUL OF A MACHINE is written by Fabian Nicieza, with art by Andrea Di Vito. You can check out all eight chapters of the motion comic now at marvel.com/lexuslc! There are also six different variant covers at the link, which all feature animated graphics.