No need for a white noise machine when the Master of Sound visits Marvel.com’s Resident Therapist.

Ulysses Klaue is a former human male who now exists as a being of pure sound. He still presents as, roughly, human in form, and is able to hold himself together barring any significant disruptions in concentration or attacks on his physical form. His medical records indicate he is otherwise healthy although this writer has been unable to parse exactly what that might mean.

Because of his “condition,” his voice has been altered. He remains understandable but the electric hum quality to his speech can prove difficult to listen to for extended periods of time leading to headaches and difficulty maintaining focus. The therapist is continuing to work on solutions to this situation so the client can receive his full session but currently the only workaround has been to be take a brief break around the halfway point for this writer to leave the room, take some ibuprofen, clear my head, and then return for the remaining time. While not ideal, the client has asserted he has no objection to this—beyond his existing objection to having see a therapist at all—and therefore will continue to be utilized until some other solution is found.

The client has a long history of criminality dating back to early young adulthood. According to his own disclosure and reports from others in his life, he began his criminal career seeking vengeance for his family name against the Royal Family of Wakanda. However, after that, most of his criminal activities seem predominantly motivated by greed and self-interest. That Wakanda has often been the target of those greedy and self-interested behaviors would suggest, though, that revenge remains, at the least, a subconscious motivator. 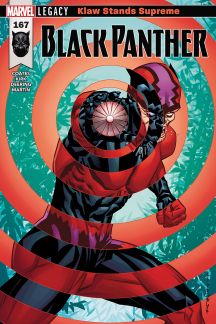 As of late, however, Klaue’s motives have become a little more difficult to discern. With the loss of his physical body and therefore a loss in the ability to experience pleasure, he has pursued activities that seem at least somewhat out of character, such as attacks on Daredevil or attempts to aid the Wizard in the claiming and controlling of an alien symbiote that, when merged with Cletus Kasady, is known as Carnage. He has declined to discuss such matters with this therapist insisting he has always acted as he wanted and these choices are merely an extension of that.

What the writer has had more luck exploring with the client is his near death experience. After being stabbed by the above mentioned Carnage, Klaue appeared to burst and dissipate. He was, however, able to stay cohesive enough to help subdue the symbiote when it appeared the alien might kill Klaue’s teammates. However, the client believed that that effort had cost him his last bit of strength and resigned himself to full dissipation.

While unclear as to how he survived or what exactly occurred between that moment and when he was able to “pull together” fully again, he is not unclear on the emotions both realizing his death was imminent and then being proven wrong evoked in him.

He endorses what sound to be like some PTSD symptoms, a sense of mental disorganization, and some halting steps towards re-evaluating current choices. He also finds himself obsessing over what it might mean for him to die, as he is purely sound, regardless of the presence of an afterlife or not. More concerning to him is the possibility that he might not be able to truly die, only dissipate and reform, ad nauseam, in ways that are largely beyond his control. The idea that not even death is something he can count on anymore have led to moments of dissociation, panic, depression, and even extreme euphoria. It also makes him feel isolated and lonely, as it represents a reminder that his humanity is something he only maintains from memory. 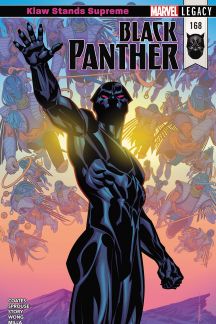 Unfortunately, though the client denies, another side effect of this thought seems to be the idea that if he is no longer mortal, he has no reason to hold back, no reason not to attack who he wants, when he wants, with as much bloodshed as might occur, as long as it slates whatever psychological hungers he is experiencing.

Due to this therapist’s recommendation and referral, the client will attend an appointment with Doctors Ta-Nehisi Coates and Chris Sprouse so they can evaluate him regarding his state of mortality at this time. The appointment will be December 27 and any and all information gained will be available in file BLACK PANTHER #168.

Psy D. Candidate Tim Stevens is a Staff Therapist who is also a being of pure sound, but his sound is deep, soothing, and very danceable.

In this article: Klaw

Who is this forgotten son of Wakanda? Tear into the backstory of Erik Killmonger, infamous foe to the Black Panther.