Celebrate the King's 102nd birthday with a look back at the last ish of his historic run with the FF!

A celebration of what would have been Jack “King” Kirby’s 102nd birthday presents the perfect time to examine his—dare we say it?—fantastic final issue of FANTASTIC FOUR (1961), which just happens to be mag #102 in 1970.

What can we say about the previous 101 issues? Well, for starters, how about: Doctor Doom! The Silver Surfer and Galactus! The Inhumans! The Black Panther! And so much more! Kirby and writer-editor Stan Lee’s unbroken string of issues on the landmark comic book still stands as a Mighty Marvel Monument, a feat accomplished by a single writer-artist team only equaled many years later by Brian Michael Bendis and Mark Bagley on ULTIMATE SPIDER-MAN (2000).

In the previous few issues to FANTASTIC FOUR #102, Lee and Kirby spun tales of the Inhumans, the Puppet Master, and the crime cartel called the Maggia, but for what turned out to be the King’s last go-round they revisited a favorite character of theirs, especially where the FF was concerned: Namor the Sub-Mariner! 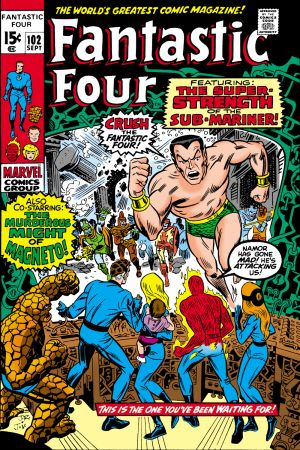 Under a looming banner reading “The Strength of the Sub-Mariner!” Lee and Kirby checked in to the Baxter Building with a little levity, namely the latest mischief between the Human Torch and the Thing. Ben Grimm existed on the four-color page as a kind of stand-in for Kirby himself, and in this story the rock-hided hero seemed to be suffering from of all things the common cold. It’s a fun moment, a bit of silliness before the real plot kicks in and evidence of one of the artist’s real strengths, illustrating the commonplace in a crazy world.

From there, chaos comes calling and before the readers knew it they were plunging deep into the ocean to witness a first in Marvel history to that point in time: the inaugural meeting of the Sub-Mariner and the X-Men’s devilish foe Magneto. Kirby even offers up a stunning splash-page of the two titans, with Namor in repose and the Master of Magnetism standing at his side, glowering. You can almost see the wheels grinding away in Magneto’s brain while he plots a way to draw the Fantastic Four and the Monarch of Atlantis into war.

And so he does. Once more, the Sub-Mariner believes the sweet words of revenge poured into his ear by a master of menace and weighs what a team-up might offer him. Meanwhile, our heroes weigh their own decisions back in New York City as they, too, move toward inevitable hostilities with their old sparring partner Namor. One climactic event later, along with a missile fired at Atlantis under suspicious circumstances, and the final panel of the issue proclaims exactly what everyone believes they’re marching toward…WAR!

And then Jack Kirby was gone, off to the Distinguished Competition across town for a few years to sow a few seeds in a different field of dreams.

Interestingly, the Sub-Mariner saga of FANTASTIC FOUR #102 was merely the opening salvo in a three-issue arc, one that Kirby only ever intended to launch, not finish. Stan Lee scrambled after receiving the news of his partner’s departure and brought in John Romita on art duties for the second and third chapters.

Kirby would, however, return to the book in short order—in a way. FANTASTIC FOUR #108 featured unused art from the King meant for another issue, but repurposed by Lee with some help by Romita and fellow artist John Buscema.

Alas, the true last bow by Jack Kirby on the book that made him a household name will always be FANTASTIC FOUR #102, a fun send-off for the man whose creative genius would never be stilled in his lifetime…and that we still celebrate to this day.

Stay tuned to Marvel.com this week for more in commemoration of the King!

Earn Points, Get RewardsJoin NOW!
In this article: Jack Kirby