Revisiting 'Silver Surfer' in the '90s

Writer Ron Marz chats about his historic run with the Sentinel of the Spaceways!

The year—1991; a cosmic handoff occurs that would shape the spaceways of the Marvel Universe for the next several years to come. With Jim Starlin embarking on an epic quest to shape a trilogy of titanic tales beginning with INFINITY GAUNTLET, the opportunity arises for relative rookie writer Ron Marz to strike out on his own shaping the SILVER SURFER ongoing series.

“I remember exactly the first time I saw Silver Surfer,” Ron recalls. “It was the cover of FANTASTIC FOUR (1961) #55, which I found in a box of my older brother’s comics in the basement. That [Jack] Kirby/[Joe] Sinnott image of the Surfer blasting the Thing seared itself into my mind. I was very young, probably not even reading yet, so I thought the Surfer must have been a bad guy. I mean, why else would he be attacking Ben?”

Nearly three decades later, Marz found himself steering the Surfer, succeeding comic book legend Starlin on the book he had launched a few years earlier and taken to prominence. Another luminary, Bernie Wrightson, had introduced the two writers with the younger one recently graduated from college and embarking on a fledgling gig writing and editing for a daily newspaper. Veering into a passion for Marvel, Marz copy-edited a prose novel for Starlin and then ended up assisting on issues of SILVER SURFER as well as writing installments of WHAT IF? before becoming Norrin Radd’s primary author.

“Jim and I lived in the same area, and saw each other a few times a week to play racquetball, grab dinner, go to the movies,” he says of his relationship with Starlin. “So it was a pretty easy process to sort out the handoff, especially since my first batch of SURFER issues were all going to tie into INFINITY GAUNTLET. The offer to take over the book officially came from editorial, of course, but I’m sure there was arm-twisting from Jim. Obviously it was a huge opportunity for a rookie, especially on a book that was selling really well at the time.

“Thinking back on it, I’m sure I was [one of] the first people to ever read the script to INFINITY GAUNTLET #1, as well as the subsequent scripts. I had to tie in to all those issues. It’s crazy to think about what all of that turned into 25 years later.”

As a relative newcomer to a shared universe like Marvel’s, Marz credits those initial tie-ins with teaching him “how to play well with others” and “how to tell a story in between other stories.” Off the back of INFINITY GAUNTLET would come INFINITY WAR and INFINITY CRUSADE in relatively rapid succession, meaning Marz had to synch up with Starlin’s saga on an annual basis, not to mention losing his SURFER artist Ron Lim regularly to those assignments. The writer rolled with the larger story, picking up valuable experience while also learning to be nimble in his plotting.

“The ‘Herald Ordeal’ storyline was actually the first arc I wanted to tell, but it just kept getting put off because we had tie-ins, and then guest stars that needed to appear for one reason or another,” Ron relates. “It was more than year into my run when I finally got to dig into the story that I had originally wanted to tell. But, ultimately, it was probably a good thing. I was a better writer by the time we got to it.”

The aforementioned “Herald Ordeal” arc, which ran from SILVER SURFER #70-75, brought together every former servant of Galactus, including the Surfer as well as notables like Firelord and Terrax, in a united effort against the World Devourer’s power-mad newest creation, Morg. One herald of Galactus who had already made her way into the book under Starlin, Frankie Raye—AKA Nova—served as the fulcrum of Marz’s efforts.

“I liked having a character who was once human as a companion for the Surfer, so the contrast made him seem more alien by comparison,” he notes. “But the notion of Nova willingly serving Galactus, who was going to feast on planets whether they were inhabited or not, was one I could not get past. That’s where the idea for ‘Herald Ordeal’ ultimately came from. How could Nova willingly be a party to the destruction wrought by Galactus? And then, what if Galactus got a herald who really liked leading the boss to inhabited worlds?”

New creations like Morg and his eventual master, Tyrant, would be Marz’s attempts to craft threats “who could literally go toe-to-toe with Galactus.” He crafted these new cosmic-level ant agonists as well as working with Starlin’s most famous creation, Thanos, whom he described as “always the smartest guy in the room, always two steps ahead of everybody else; I never really thought of him as a villain, just someone with a different agenda, willing to do whatever was necessary.”

The Mad Titan would trail Marz into other assignments like SECRET DEFENDERS (1993) where he got to play with some of the more earthbound heroes not available to him on books such as COSMIC POWERS (1994). As far as favorite guest stars within the pages of SILVER SURFER, the writer counts the Fantastic Four and Spider-Man alongside the original Captain Marvel, whom he got a crack at from beyond the grave in issue #63. 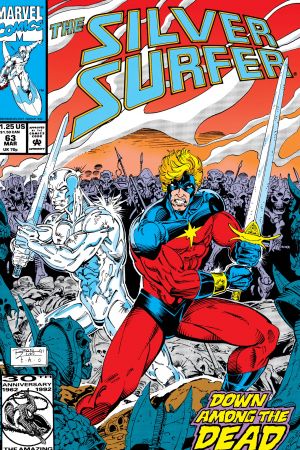 All told, Marz would remain on SILVER SURFER for nearly five years, spanning from issue #51 before departing after installment #102. He would in large part shape the character for a generation of fans who may not have encountered the original incarnation and got to know Norrin through the burgeoning outer space scene of '90s Marvel.

“Beginning my career learning from Jim Starlin, and then working with Ron Lim, was an immeasurable gift,” remarks Ron with gratitude. “Having a consummate professional and storyteller like [Lim] bring my earliest scripts to life was a huge learning experience for me, and really helped me figure out the job.

“I also got to say hi to Stan Lee at one of the Marvel Christmas parties. I introduced myself, and said I was writing [SILVER SURFER], and Stan shook my hand and said he really liked what I was doing on the book. I have no idea if Stan had any clue who I was, or if he really knew what I was doing on SURFER. But he was kind enough to tell me that, and make me believe it. So it meant a lot then, and it means a lot now.”

Survey the work of Ron Marz on SILVER SURFER (1987) as well as SECRET DEFENDERS (1993) and COSMIC POWERS (1994) through Marvel Unlimited!

Earn Points, Get RewardsJoin NOW!
In this article: Silver Surfer