Who—or what—might be able to take down the mighty Doreen Green?

Who could defeat the Unbeatable Squirrel Girl?

This question confounds the most powerful beings in the universe. But, on December 7, Taskmaster will use his attack-duplicating moves to go toe-to-toe with Doreen Green in UNBEATABLE SQUIRREL GIRL #15! The villain’s photographic reflexes make him seemingly purpose-built to keep up with Doreen. Could this be a perfect recipe for her defeat?

So, who—or what—else might be able to take down SG? We hazard a few guesses…

Aunt May
She’s sick, her feet hurt, the cable went out in the middle of her afternoon soaps—she’s mad. And she decides to take it out on Doreen Green by inviting her over for some spoiled meatloaf! The ultimate equalizer: bad cooking!

And if May’s putrid foodstuff doesn’t do the job, she can call in backup from…

The Ghost of Uncle Ben
The shimmering outline of Ben Parker walks directly through a closed door, places his hand on Doreen’s shoulder, and expresses his deep, deep disappointment in her. Doreen wouldn’t stand a chance against the guilt!

A Black Hole
The greatest galactic super villains in the universe haven’t stood a chance against the Unbeatable Squirrel Girl, but what about the might of a collapsing star? Doreen ends up in space somehow and falls into one. You call it “oversimplified;” I call it “physics”!

Nancy Whitehead
Who would Doreen least expect to turn heel? That’s right: her best friend in the world, Nancy Whitehead! Even if Nancy couldn’t physically defeat Doreen, the simple concept of betrayal would!

The Owl, Falcon, Nighthawk
No, not Leland Owlsley, Sam Wilson, and Kyle Richmond; just literally the natural predators of squirrels: an owl, a falcon, and some kind of nocturnal hawk. Go food chain, go! 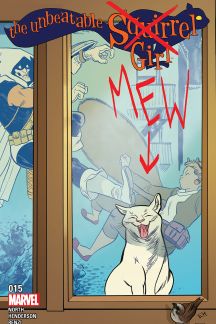 Nelson and Murdock Attorneys at Law
Not Daredevil, he wouldn’t stand a chance. Doreen would take on the might of a powerful law firm! Partners! Associates! Paralegals! Law clerks! Bad local TV commercials! Good luck, Doreen!

The Daily Bugle
The power of the media! Yellow journalism, smear campaigns, unethical reporting—forces that give J. Jonah Jameson more might than Thanos! The public loves Squirrel Girl, but wait until they read the story on Page 9!

Check out UNBEATABLE SQUIRREL GIRL #15 by Ryan North and Erica Henderson, out December 7!

The Best Marvel Comics to Read to Your Kids

School’s Back in Session with ‘Marvel’s Avengers Assembly: The Sinister Substitute’