As we previously highlighted our list of the Greatest Female Marvel Super Heroes, we'd also like to highlight some of the baddest women in the Marvel Universe. So, if you prefer to root for the villain, you’ve come to right place.

These are just some of the greatest female Super Villains in Marvel history.

Goddess of death, Queen of Asgard’s underworld. These titles alone prove Hela is not to be taken lightly.

Daughter of Angrboda, a giantess, and Loki, the God of Mischief, Hela rules over two of the nine realms: Hel and Niffleheim. In addition to the standard Asgardian abilities, Hela can claim souls, resurrect the dead, has a withering touch that can age, wither, or kill her enemies, cast illusions, astral project, and much more. Most of her powers come from the magic cloak she wears, but should it be removed, she becomes powerless. The cloak also hides her true appearance: a decayed face due to being born half-dead.

Lose yourself in Hela's long history with her explore page: Hela 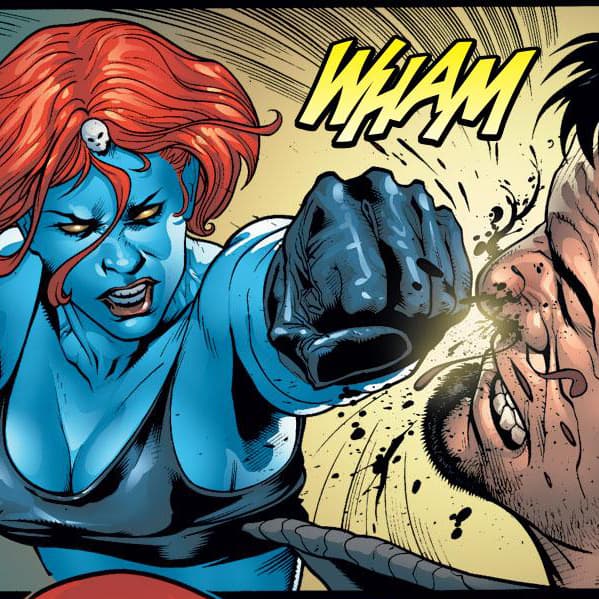 Raven Darkholme, also known as Mystique, spends most of her time as a thorn in the side of the X-Men.

She uses her shape-shifting abilities to deceive and to get what she wants, such as becoming the Deputy Director of DARPA (Defense Advanced Research Planning Agency) to gain access to weapons and military secrets for her personal plans. In addition to shape-shifting, she also possesses a healing factor, enhanced strength, and immunity to aging.

Raven is also the mother to notable mutant characters: Graydon Creed (whom she abandoned and later assassinated), Nightcrawler (another son she abandoned), and Rogue (whom she adopted and has a not-so-great relationship with). While Mystique has teamed up with the X-Men a couple of times, the partnerships are often short-lived, and she inevitably returns to terrorizing humanity. 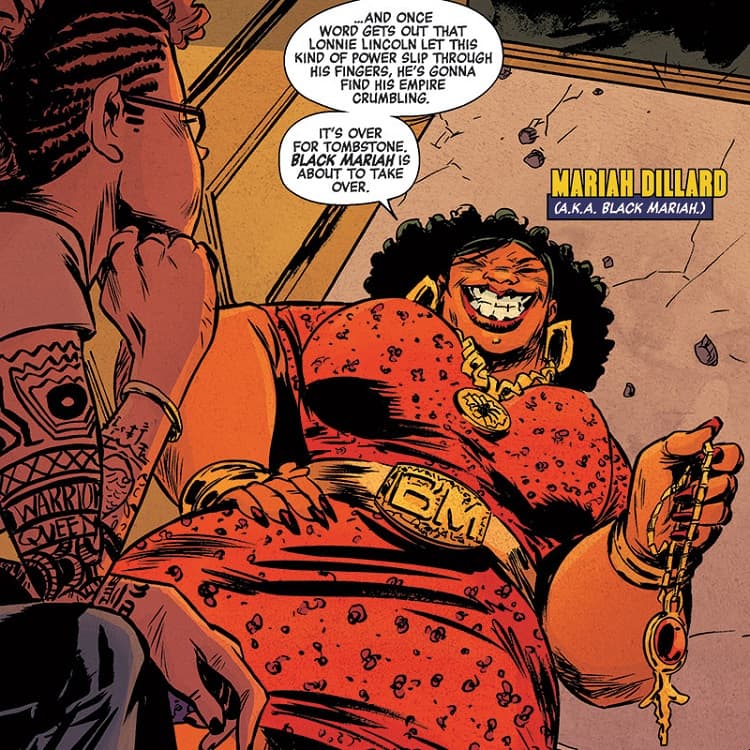 Mariah Dillard might appear as a defenseless lady, but she’s anything but.

Taking her namesake from a police van, Black Mariah is cunning and intimidating—traits that are needed in her line of work. The leader of the Rat Pack, a gang that used fake ambulances and police vans to steal valuables from the recently deceased, Mariah spent a stint in jail before starting a new and more lucrative empire: drug dealing.

Although she doesn’t have super powers, she makes up for it with strength. Black Mariah’s punch can send a man flying across the room. But the most unique weapon in her arsenal are poisoned needles she also uses for knitting. She has also been a member of the New Pride, which was restarted by former member of the Runaways, Alex Wilder.

Introduced as Mary Alice Walker before being revealed as Typhoid Mary, Mary is timid and has no memory of any of her personas’ wrongdoing. But her Typhoid persona arises from Mary’s childhood abuse, which developed into dissociative identity disorder. When Mary is Typhoid, she has a high fever, is more athletic, and is out of control. She kills, works for the Kingpin, and uses her pyrokinesis to set Daredevil and Wolverine on fire on separate occasions.

Typhoid, however, is not even the worst of Mary’s personas. After being institutionalized, a third persona arose within Mary. Bloody Mary is violent, sadistic, unstable, and kills only men who abuse women. In addition to these names, she's developed more personas through the years since.

Devastated by the “loss” of Cyclops after a psychic duel with Mastermind, the Phoenix, believing itself to be the real Jean Grey, became corrupted and transformed into the Dark Phoenix. Whereas the Phoenix represents life and light, the Dark Phoenix represents power and destruction, and thirsts for these things. It is uncontrollable and destructive. The Dark Phoenix is so powerful that it once literally devoured a star, which caused a supernova and killed billions.

With Jean Grey as its basis, an already powerful mutant, the villain has a higher level of telepathy and telekinesis can fly at supersonic speeds, and can molecularly rearrange the structure of matter. In other words, you really don’t want to get into a fight with the Dark Phoenix.

Read up on Jean's decades-long story with her character page: Phoenix (Jean Grey)

In belief that Wolverine stole her father’s research on fusing adamantium to the human skeleton, she hunted him down relentlessly to restore her family’s honor. Each time they met, Deathstrike lost, so she decided to fight fire with fire by having Spiral transform her into a cyborg.

In addition to her bevy of weaponry, sword skills, and her training as an assassin, Spiral’s upgrade gave her superhuman strength, agility, durability, stamina, and speed. And crucially, she has adamantium claws that can slice through nearly anything. The woman also known as Yuriko Oyama can also interface with computers and download her consciousness, which can be helpful when her original body has been destroyed.

Though Lady D has recently teamed up with the Weapon X crew, she'll always have her dark and dangerous past to lead her way.

Tilda Johnson, better known as Nightshade, started her criminal career as a teen, when she caught the interest of the Yellow Claw, who funded her werewolf formula research. Self-taught in biochemistry, physics, genetics, and cybernetics, Nightshade has a diverse arsenal of scientific talents. She has acidic gloves that can burn through Black Panther’s suit, creates a hypnosis chemical to control men, and builds cybernauts to fight her super powered foes.

At one point, Nightshade turned from her life of crime, becoming a hospital receptionist, but was fired from her job after she embarrassed a doctor who gave a bad diagnosis and found out about her criminal past. Low on money, she joined M.O.D.O.K.’s Eleven, a squad consisting of criminals and mercenaries.

Amora AKA the Enchantress

With the ability to manipulate Asgardian energy and her knowledge of enchantments and spells, Amora, also known as the Enchantress, is one of the most powerful sorceresses in Asgard.

Having studied under Karnilla before being banished due to her lack of discipline, Amora learned magic under other mages, seducing them to learn their secrets. Her spells include paralysis, elemental conversion, and time control. She can also alter her appearance, control peoples' minds, and charm unsuspecting foes into doing her bidding.

Fun fact: Amora has lost to Dazzler in a singing contests at disco clubs on Earth and Asgard.

Read up on Amora's history with her explore page: Enchantress (Amora)

Mary MacPherran, a scrawny high school outcast, was transformed into the super powered Titania in exchange for joining of Doctor Doom’s army on Battleworld.

No longer shy and meek, but brash and confident, she held her own against various members of the X-Men during her time on Battleword. After the events of Secret Wars, she mainly became an antagonist to She-Hulk. Titania became so obsessed with beating She-Hulk that she stole the Power Gem to defeat her. (It didn't work.)

In addition to her super strength, she has superhuman endurance and stamina, highly resistant to physical injury, and unbothered by extreme temperatures. Titania has also been a member of the Masters of Evil, the Frightful Four, and the Femizons. 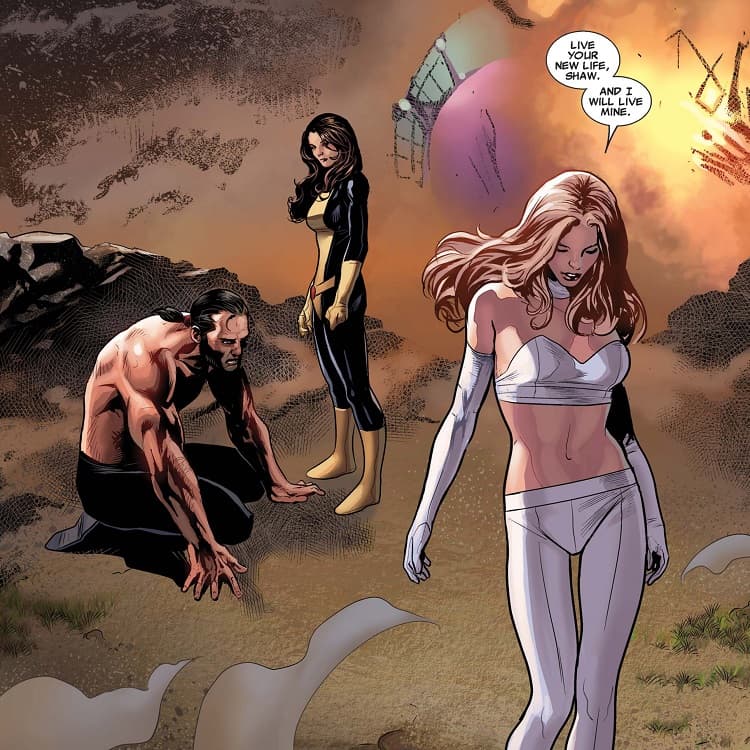 The woman who is as frigid as her last name, Emma Frost. And although she has sometimes shifted into being a hero, she has quite the evil past.

The White Queen of the Hellfire Club once tried to get a 13 year-old Kitty Pryde to enroll in the Massachusetts Academy for her own nefarious reasons. Emma was amoral and ruthless, which was shown when she shot her older sister, Adrienne, and projected a Cyclops illusion which was “killed” by Black Bolt, in order to declare war against the Inhumans. And more than once, she has been a host for the Phoenix Force, but could not handle its immense power, unlike a certain other character on this list…

Emma is an Omega-Level mutant. She can read minds, erase memories, switch minds, and broadcast thoughts. But that’s not all she can do. Frost has a second mutation, which allows her to turn her body into a diamond form. Although she can’t use her telepathic abilities in this form, she has immunity from other telepaths, high durability, and no need for water, food, or air.