Spidey suffers from an Identity Crisis, as the four Slingers identities make their debut. 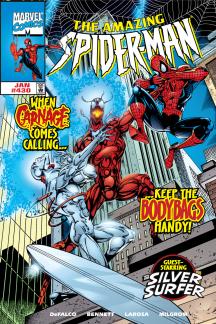 A webbed-up corpse discovered in SPIDER-MAN #88 pointed to our hero as the murderer, setting the entire city against him. The Daily Bugle put a five-million-dollar bounty on Spidey’s head in SENSATIONAL SPIDER-MAN #25, New Yorkers became intent on capturing him in AMAZING SPIDER-MAN #432, Shot gun and the Punisher entered the sweepstakes in SPIDER-MAN #89, and the wallcrawler himself hunted down the new Green Goblin to save little Normie Osborn in SPECTACULAR SPIDER-MAN #255. 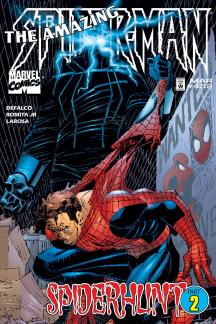 Sandman and Hydro-Man made an unusual team to nab the webslinger and Silver Sable in SENSATIONAL SPIDER-MAN #26, and Mr. Hyde tried his best to beat them to the punch in AMAZING SPIDER-MAN #433. Spidey crossed over into the Negative Zone in SPIDER-MAN #90 to clash with Blastaar and his adversary Dusk. Back on Earth, Peter Parker wore a bag over his head to stuff the White Rabbit back into her hole in SPECTACULAR SPIDER-MAN #256 and team-up with Hannibal King to nail the coffin lid down on Dracula’s daughter Lilith in SPIDER-MAN UNLIMITED #20. 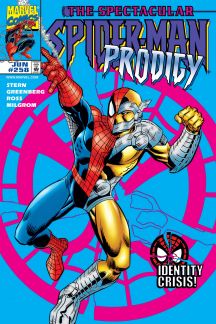 The supposed final chapter in the sinister saga of Osborn and Parker kicked into gear in AMAZING SPIDER-MAN #441, sending our hero into battle with Osborn as the Green Goblin in SPIDER-MAN #97. A very-much alive Aunt May surfaced in SPECTACULAR SPIDER-MAN #263 to further confuse Peter, as well as what he believed to be his daughter in SPIDER-MAN #98. Later, after the dust cleared, Spider-Man witnessed the birth of four new heroes in SLINGERS #1 when others took over the four costumed identities he’d recently created for himself.

Here's everything you need to know about 'The End of the Spider-Verse,' which kicks off in Dan Slott and Mark Bagley's 'Spider-Man' #1.