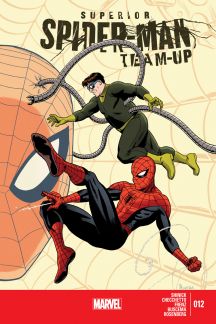 Peter’s spirit began to actively help Otto during the crisis in SUPERIOR SPIDER-MAN #30, and when Octavius realized he couldn’t save the day and Anna’s life he allowed Peter to take control of his body once again and suit up as the one and only Spider-Man. The wallcrawler rushed into the fray in SUPERIOR SPIDER-MAN #31 and took on the Goblin Knight, Menace, and finally the King himself, who he discovered to be Norman Osborn with plastic surgery. 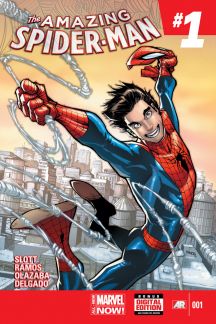 The webslinger answered an Avengers emergency call in ORIGINAL SIN #1 to find Mindless Ones roaming the city streets and fighting the Thing. Spidey helped the heroes battle Exterminatrix and a low-grade villain called the Orb in ORIGINAL SIN #2, but when the eyeball enemy pulled out the Watcher’s eye and exploded it like a bomb in ORIGINAL SIN #3, he knew it would change his life forever. In fact, due to the bomb, the wallcrawler discovered another person bitten by the same spider that bit him as a teenager and rushed to find her in AMAZING SPIDER-MAN #4. 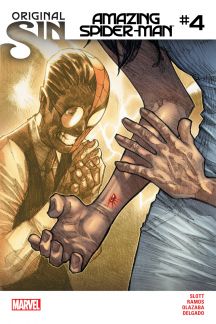 Calling herself Silk and sporting even greater spider powers than Spidey, she helped the hero fight off the Black Cat and Electro in AMAZING SPIDER-MAN #5, then found herself in a rematch with the dangerous duo in AMAZING SPIDER-MAN #6. Spider-Man rejoined the Avengers in ORIGINAL SIN #6 to invade Nick Fury’s secret orbiting satellite and ended up knocked out and floating in space in ORIGINAL SIN #7.

What is Spider-Verse? | Marvel TL;DR