T'Challa proves his worth to the Avengers, teams with Daredevil, and more!

For more than 50 years, the Black Panther has stood at the forefront on the Marvel Universe. With T’Challa appearing on the big screen this year in both Marvel Studios’ “Black Panther” and “Avengers: Infinity War,” take a look back at over five decades worth of comic book adventures for the King of Wakanda!

The big day arrived for the Wasp and Yellowjacket in AVENGERS #60, a wedding witnessed by the Black Panther, who also took part in the simultaneous battle against party crasher the Ringmaster and his Circus of Crime.

T’Challa teamed with the Vision to confront the giant Ymir in Wakanda in AVENGERS #61, a ploy by the devilish Asmodeus to sew chaos throughout the world. Later, the Panther invited all of Earth’s Mightiest Heroes to his country in AVENGERS #62, but M’Baku the Man-Ape chose that occasion to attempt a coup and destroy his rival.

The Avengers held a wake for a seemingly dead Captain America in CAPTAIN AMERICA #113, but when they later learned of his return in CAPTAIN AMERICA #114, the Black Panther decided to allow the famous hero his privacy. T’Challa also aided Daredevil at this time, in DAREDEVIL #52, when the Man Without Fear suffered from radiation poisoning and had his hands full with the problem of Starr Saxon. 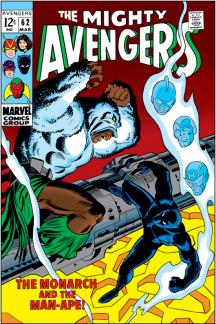 Mislead by the villainous Egghead in AVENGERS #63, the Panther raced out with his teammates to rescue the Black Widow while back at headquarters Hawkeye fashioned himself into the new Goliath. Egghead’s scheme led to a confrontation aboard his space station in AVENGERS #64, and a bout with the Swordsman in AVENGERS #65.

After a short break, the Black Panther returned to help the team track down a revived Ultron in AVENGERS #68, then worked to convince them to back Kang in the Grandmaster’s Game of the Galaxies in AVENGERS #69. This led to a sprawling fight with the Squadron Sinister in AVENGERS #70, and T’Challa, the Vision, and Yellowjacket being transported by Kang back to 1942 for a scuffle with Captain America, Namor the Sub-Mariner, and the original Human Torch in AVENGERS #72.

Shortly after returning to the present, T’Challa encountered a singer who was under attack in AVENGERS #73, and asked his fellow heroes to allow him to battle the bigoted Sons of the Serpent on his own. After his capture by the Sons, the Panther chafed under his imprisonment in AVENGERS #74 while an imposter Black Panther confused the public and Earth’s Mightiest Heroes.

Quicksilver returned in AVENGERS #75 to inform the team of his sister Wanda’s abduction to Polemachus, the other-dimensional home of Arkon. The Avengers and T’Challa made their way to Polemachus in AVENGERS #76 to confront Arkon, but the wily ruler traveled to Earth in retreat and suffered his defeat there.

While the team struggled with the wicked Cornelius Van Lunt, T’Challa took on a new identity in AVENGERS #77, that of “Luke Charles,” a high school teacher. He joined with his fellow Avengers again in INCREDIBLE HULK #128 to attempt to capture the Hulk with a Gammatron Bombarder. 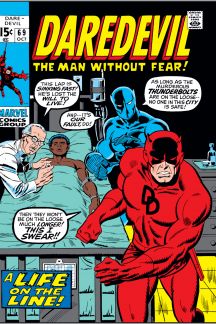 Captain America made his way back to Avengers Mansion in AVENGERS #78, only to be waylaid by the Black Panther’s old foe the Man-Ape. When the villain challenged T’Challa to single combat, the fight ushered in the Lethal Legion, a collection of crooks with beefs against the heroes. In AVENGERS #79, the Avengers defeated their opponents and also learned new information of the Vision’s creation.

A new incarnation of the Native American hero Red Wolf debuted in AVENGERS #80 to warn the group about a new scheme by Cornelius Van Lunt. The Black Panther returned to his teaching job and opened up an investigation into the Thunderbolt gang, which led to a team-up with the Man Without Fear in DAREDEVIL #69. When the Zodiac captured the Avengers in AVENGERS #81, it fell to T’Challa and Daredevil to rescue them in AVENGERS #82.

When all seemed quiet afterward, the mystical Enchantress disguised herself as Valkyrie and commanded a team of female warriors to battle the Black Panther and the Avengers in AVENGERS #83.