The Panther encounters the Avengers, the Fantastic Four, Iron Man and more!

The Black Panther found himself psychically forced to attend a gathering of heroes at Avengers Mansion in AVENGERS #211. There, he discovered a membership drive of sorts taking place, driven by the mental powers of Moondragon to bolsters the team’s ranks. When fights broke out among those gathered, T’Challa resisted Moondragon’s challenge and any offer of Avengers membership for the time being.

After being among the many heroes present for the tragic events in THE DEATH OF CAPTAIN MARVEL, T’Challa welcomed his friends the Fantastic Four to his African nation of Wakanda in FANTASTIC FOUR #241, and learned that the famous family sought a strange energy signature within the country’s borders. T’Challa disguised himself as one of his warriors to keep an eye on his friends, but when they stumbled upon a man using an ancient alien power to set himself up as a Roman emperor, he moved in to help them bring him down. 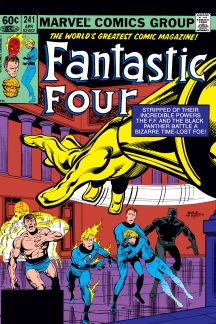 The cosmic Grandmaster summoned every known hero on Earth to compete in a grandiose game in CONTEST OF CHAMPIONS #1, and the Black Panther learned of the being’s desire to resurrect his brother the Collector should he win. Placed on a team alongside the X-Men’s Angel and the Russian hero Vanguard, T’Challa traveled to a city in Japan in CONTEST OF CHAMPIONS #3 to battle the Thing, Wolverine, and Peregrine. The Wakandan monarch’s team ultimately lost the challenge.

T’Challa next traveled to Washington D.C. to support the Hulk’s plea for amnesty from the President of the United States in INCREDIBLE HULK #278. When a supposed alien attack broke out, the Black Panther fought alongside the green giant to stop it, and then later raised his voice in triumph as the Hulk stood hailed as a hero. 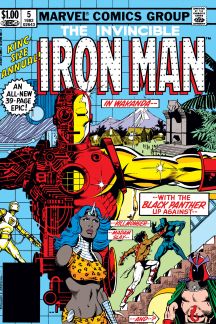 Tony Stark visited some holdings in Wakanda in IRON MAN ANNUAL #5, but ran face first into a gambit by Madame Slay to kill T’Challa. The Panther’s old foe Erik Killmonger then claimed the heroic mantle while Iron Man helped T’Challa behind the scenes to root out the true villain of the piece: The Mandarin.