The Black Panther reunites with the Avengers and teams with Spider-Man, Iron Man, and Excalibur!

The Black Panther later attended a party thrown by the Avengers, one crashed by none other than Doctor Doom himself, in AVENGERS #332 and #333. 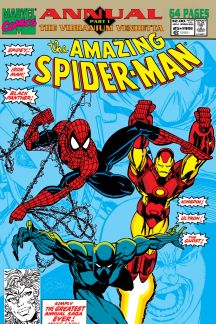 Earth’s Mightiest Heroes then called the Panther into service to accompany scientists Hank Pym and Beast to the Blue Area of the Moon in AVENGERS #335 to hunt for the origin of their new, powerful foes, the Brethren. T’Challa and the others entered the Collector’s starship in AVENGERS #336 to find not only a miniature ecosystem ravaged by the escaped Brethren, but also The Watcher in AVENGERS #337. 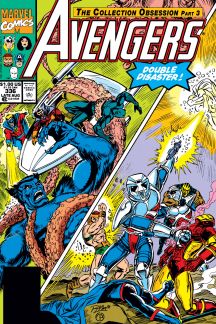 With information culled from an elderly Brethren, Black Panther and his fellows returned to Earth in AVENGERS #338 to relay their findings to the main team. When The Collector tipped his hand and threatened the entire planet’s populace, T’Challa and the others took him down in AVENGERS #339.

After an encounter with the UK-based Knights of the Pendragon in KNIGHTS OF THE PENDRAGON #14-18 (published by Marvel UK), the Black Panther clashed with the alien N’Grith in MARVEL FANFARE #60 and then with the Coal Tiger, his exact duplicate from another reality, in AVENGERS #356, part of an ongoing struggle between Earth’s Mightiest Heroes and their new foes, the alternate-Earth-hopping Gatherers. 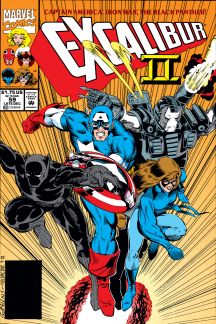 Not long after, T’Challa played host to a small contingent of Avengers and Excalibur members to discuss toxic waste disposal in EXCALIBUR #59.