The gathering of Excalibur and Avengers team members the Black Panther took part in brought forth the menace of Icon, a bio-chemist with the ability to transmute his body into wood, in EXCALIBUR #60. 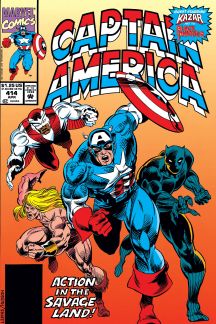 After aiding the Fantastic Four in another dust-up with his old enemy Klaw in FANTASTIC FOUR UNLIMITED #1, the Panther hired the cyborg Deathlok to provide cyber-security for Wakanda in DEATHLOK #22. Moses Magnum sent his agent Phreak and others to invade the small country, but when that attack fell apart, he dispatched Killjoy to assassinate T’Challa in DEATHLOK #23. The cyber warrior blocked Killjoy’s assignment in DEATHLOK #24, and joined forces with the Panther in DEATHLOK #25 to bring down Magnum once and for all. T’Challa then teamed with the immortal Black Axe and fellow African hero Afrikaa in the Marvel UK title BLACK AXE #5, #6, and #7 against Jonathan Cardinal and his Cardinal’s Guard.

After unwittingly participating in a S.H.I.E.L.D. Life Model Decoy test in MARVEL COMICS PRESENTS #148, T’Challa loaned his longtime ally Sue Storm much needed money for use by her team in FANTASTIC FOUR #385. The Panther would then find his own request for assistance with a young, superpower Wakandan called Vibraxis rebuffed by an upset Human Torch in FANTASTIC FOUR #390, and as a result traveled to see the Inhumans in FANTASTIC FOUR #391. Now joined by both Vibraxis and the Inuuman Devlor, the Panther was present for the first meeting between those two, the Warrior-Princess Huntara, and a teenage version of Franklin Richards called Psi-Lord in FANTASTIC FOUR #392. The Black Panther then brought these four young heroes together to form a new team in FANTASTIC FORCE #1 and the group acquitted themselves well against the Panther’s longtime foe, Klaw, in their first outing.