The King of Wakanda offers experience and wisdom to a Fantastic Force and fights against Onslaught!

Returning to his native Wakanda in FANTASTIC FORCE #4, T’Challa expressed surprise that his government decided to revive a vibranium research facility that proved unsafe in the past. His protests grew more strident in FANTASTIC FORCE #5 as his young charges back in the States battled the Super-Adaptoid.

T’Challa encountered Night Thrasher in NIGHT THRASHER #18, teamed with Black Widow and Thunderstrike in THUNDERSTRIKE #20, and in FANTASTIC FOUR #400, he participated in an all-out struggle between the Celestials and the Watchers, and fought against opponents plucked from different points in the timestream. Afterward, he attended the funeral of his believed-dead friend, Reed Richards.

After playing a role in the Atlantis Rising incident in FANTASTIC FOUR: ATLANTIS RISING #1, T’Challa landed in New York City in FANTASTIC FORCE #10, angry over his protégé Vibraxas’ killing of a street thug and Franklin Richards’ leadership over the team the Panther funded. Mollified somewhat by Franklin handing the reins over to Johnny Storm, The Black Panther joined in a struggle with Lord Moses and his agents in FANTASTIC FORCE #11.

Following the Moses incident, T’Challa traveled with his team to the other-worldly Elsewhen to aid Psi-Lord against the armies of Vangaard in FANTASTIC FORCE #12. Back on Earth, he stopped a mind-controlled She-Hulk during her raid on a museum in FANTASTIC FORCE #13, and, after welcoming her to the group, flew back to Wakanda for the trial of Vibraxas and the deepening situation with the small nation’s Vibranium Research Facility.

Still in his native Wakanda in FANTASTIC FORCE #15, Black Panther fought alongside his young compatriots against a towering monster called the Vibravore, a creature spawned from vibranium metal itself. Psi-Lord became the key to defeating it, but T’Challa possessed no answers to the Wakandan parliament cutting off all funding of Fantastic Force in the aftermath of the Vibravore’s rampage.

Returning once more to the States, the Panther witnessed the emergence of a new Wasp in AVENGERS #394, a radical evolution of Janet Van Dyne’s heroic persona and the arrival of a teenage Tony Stark from another timeline in AGE OF INNOCENCE: THE REBIRTH OF IRON MAN #1. Later, T’Challa encountered Daredevil in OVER THE EDGE #6, and found himself fighting shadow forms that resembled past foes of the Avengers in AVENGERS #400 – a devilish scheme by Loki, god of mischief, to crush the heroes once and for all. 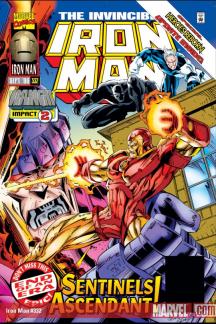 In IRON MAN #332, T’Challa worked alongside Tony Stark to fashion strong psychic shields for their fellow champions to use against Onslaught’s destructive and intrusive mental powers, and when his old friends the Fantastic Four needed him, Black Panther swept in to aid Nathaniel Richards in FANTASTIC FOUR #416 in a battle with a simulation of the Red Ghost and his apes. In the aftermath of the skirmish, Fantastic Force finally disbanded for good while the massive threat of Onslaught grew.

Finally, the Avengers and other heroes joined with the X-Men to confront the menace directly and en masse in ONSLAUGHT: MARVEL UNIVERSE #1. Though ultimately defeated, Onslaught brought about the disappearance of T’Challa himself, along with several of his closest comrades in the super hero community.