The Most Powerful Object in the Marvel Universe

Look back at the history of the Ultimate Nullifier as you read 'Old Man Quill' #10!

In the future, Peter Quill wants one thing: revenge!

In the pages of OLD MAN QUILL, readers have thrilled to the one-time Star-Lord's adventures as he makes his way through a veritable gauntlet to find the Ultimate Nullifier and destroy the Universal Church of Truth—who are also acting as Galactus' heralds! In this week's OLD MAN QUILL #10, by Ethan Sacks and Robert Gill, the hero finds himself traveling through time to find another version of the device, having failed to attain it in his own timeline!

But what is the Ultimate Nullifier and why is it such a big deal? Like many of the best pieces of the Marvel Universe, this one came from the fertile minds of Stan Lee and Jack Kirby!

In the landmark FANTASTIC FOUR (1961) #48, the eponymous team faced a threat like none other when Galactus landed on Earth and made a mind-melting proclamation: "My journey is ended! This planet shall sustain me until it has been drained of all elemental life!"

Galactus began constructing the instrument for his planetary feast right on the Baxter Building in issue #49. The Watcher appeared and told the team about a device that could help them, noting that only the Human Torch could retrieve it. Sent to the Center of Infinity and guided by Uatu, Johnny Storm eventually arrived on Galactus' planet. 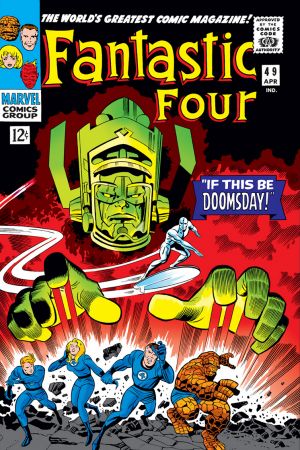 By ish #50, the Devourer of Worlds' Heraldm, the Silver Surfer, turned against his master, which allowed the Torch enough time to return to Earth with the Ultimate Nullifier. The Watcher warned Reed that the device could destroy the entire solar system and then conveyed his plan to the mortal. Upon witnessing Mister Fantastic holding the Nullifier, the cosmic being freaked out, understanding it's destructive potential. Not wanting to potentially die or deal with these puny, upstart mortals, Galactus agreed to leave the planet alone in exchange for the Ultimate Nullifier. 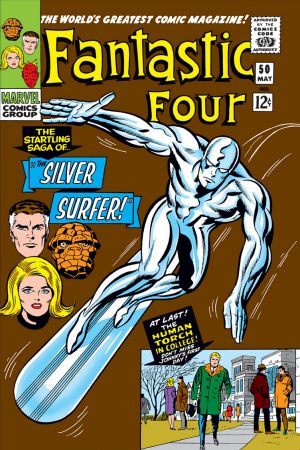 Though its origins remain a nearly complete mystery, the device is known the cosmos over for being able to erase whatever the wielder wants. However, operating the device requires an intense amount of concentration. If one becomes distracted while using it...the power can spread out and destroy anything in its path.

Adam Warlock attempted to use the device against his greatest enemy, Magus, in INFINITY WATCH. Later, the Fantastic Four teamed with Quasar, Moondragon, Frankie "Nova" Raye, Silver Surfer, and Genis Mar-Vell to get it before a being called Abraxas could in FANTASTIC FOUR #46-50.

Given the device's astonishing power and Galactus' documented fear of its very existence, it makes sense that Peter Quill would do just about anything to get his hands on one regardless of where—or when—it comes from...

Chris Pratt joins us live from the red carpet at the premiere of Thor: Love and Thunder to chat about Star-Lord and the Guardians of the Galaxy fighting alongside Thor!