In 1966, in the pages of FANTASTIC FOUR #52 by Stan Lee and Jack Kirby, the FF travelled to the technologically advanced African nation of Wakanda where they met, fought, and inevitably teamed up with that nation’s ruler, a great warrior named T’Challa, the Black Panther.

It proved a landmark moment.

"Seeing black super heroes made me say, ‘I knew it! There has to be Black, Asian, Latino and other heroes from all races," says Darryl McDaniels, best known as D.M.C. of legendary hip hop group Run-D.M.C.

Black Panther not only stands out as an amazing character in his own right; he also claims the title of the world’s first black super hero. For the previous 30 years almost all the major super heroes had been white, even when they were robots or aliens. The exceptions might have orange skin or green, but never black.

Soldier Gabe Jones, in the pages of NICK FURY AND HIS HOWLING COMMANDOES, represented a rare example of a black character, but even he couldn’t be called a super hero. As the Civil Rights Movement reached its peak in the mid-60’s, the time for America to have a black super hero had more than come.

Black Panther answered that call and would be one of three era-defining black heroes that first appeared in the Marvel Universe between 1966 and 1972. The winged Falcon followed in 1969 in the pages of CAPTAIN AMERICA, the first African-American super hero. Luke Cage, Power Man, debuted in HERO FOR HIRE #1 in 1972 as the first African-American super hero with his own series. 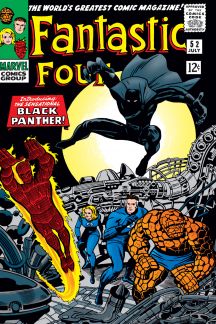 For many young black readers the introduction of these characters opened up a new world.

“Seeing black super heroes made me say, ‘I knew it! There has to be Black, Asian, Latino and other heroes from all races,” says Darryl McDaniels, best known as D.M.C. of legendary hip hop group Run-D.M.C. “It showed at the time that black people were not just pimps, pushers, and in street gangs! It showed we were good too!”

“[These characters] meant a lot; they meant everything,” says DJ and rapper Pete Rock. “After seeing black super heroes like Luke Cage or Black Panther, it felt like we were a part of something. Mostly when you look at comic books you see the heroes and villains are white. Seeing the black ones felt like some sort of a unification. That’s what attracted me to Marvel.”

For current Marvel Editor-in-Chief Axel Alonso, the creation of these three characters represents one of Marvel’s great strengths.

“Marvel’s core philosophy is that stories should reflect the world outside our window, in all its diversity,” Alonso explains. “In the mid-‘60’s, the Black Panther stepped onto the stage as the first black super hero, capable of going toe-to-toe with none other than the Fantastic Four. In the late ‘60’s and early ‘70’s, the Falcon provided Captain America with both a worthy sidekick and a tour guide through the themes of the day, most notably the Civil Rights Movement. And in the early ‘70’s, Luke Cage erupted from the cinematic tradition known as Blaxploitation to bring a new brand of super hero onto the stage, a more flawed, street-level hero. All three are very different and very unique.”

"[These characters] meant a lot; they meant everything," says DJ and rapper Pete Rock. "After seeing black super heroes like Luke Cage or Black Panther, it felt like we were a part of something."

As Alonso says, Falcon and Luke Cage drew on more contemporary ideas. They represented the civil rights struggles of their time.

“You had so many things going on in real life,” notes Rock, “Comics took those [events] and made great stories out of them.” Rock sees Luke Cage’s bulletproof skin as a powerful symbol: “He was determined to get the job done without taking a fall.”

With the first black super heroes came other black characters. Robbie Robertson joined the cast of Spider-Man in 1967, the first African-American character in a supporting role in a super hero book. In 1968, Nick Fury faced Centurius, one of the first black super villains, in the pages of NICK FURY AGENT OF S.H.I.E.L.D. In 1969, Spider-Man faced the anti-hero the Prowler, a brilliant young black man who turned to crime out of desperation.

The Blaxploitation era of the 1970’s created a Golden Age for Marvel’s black heroes. Following Luke Cage in 1972, the horror-themed heroes Blade and Brother Voodoo debuted in 1973 in TOMB OF DRACULA #10 and STRANGE TALES #169 respectively; the scientist Bill Foster took on the mantel Black Goliath in 1975 in POWER MAN #24; and that same year, Marvel introduced the world to its first two black female heroes; Misty Knight and Storm.

"Blade paved the way for the [Marvel Cinematic Universe]," says artist Ron Wimberly. "Without ‘Blade,’ there’d be no ‘Guardians of the Galaxy.’"

Misty and Iron Fist formed super hero comics’ first interracial couple; they shared their first on-panel kiss in the pages of MARVEL TEAM-UP #65 by Chris Claremont and John Byrne in December 1977. Storm debuted a few months after Misty in GIANT-SIZE X-MEN #1 by Len Wein and Dave Cockrum, but she had a bigger impact as the first black female super hero to star in an ongoing title. Storm remains a major part of the X-Men to this day.

For rapper and producer MF Grimm, the impact of these early black super heroes can’t be overstated:

“As the first few to be created and acknowledged by the public in a racially charged time and medium, they paved the way for so many more, as well as [for] black creators to find their voice in the industry,” he notes. “They have become symbolic of what we all strive to be, with attributes such as power and perseverance, as shown by Luke Cage, or the beauty and strength associated with Storm; and they illustrate a connection to heritage and pride of one’s roots, culture, and family, as with the Black Panther.”

One of Marvel’s 70’s heroes played another important role in Marvel history. The vampire hunter Blade starred in three hit movies from 1998 and 2004.

“Blade paved the way for the [Marvel Cinematic Universe],” says artist Ron Wimberly, whose work includes covers for MIGHTY AVENGERS and SUPERIOR FOES OF SPIDER-MAN. “[‘Blade’] ushered in a new age of super-hero cinema. Without ‘Blade,’ there’d be no ‘Guardians of the Galaxy.’”

“[T]he idea of Blade speaks to my personal experience,” he says. “Blade has to deal with family dysfunction; the curbing of his own power/privilege while suffering from prejudice from others with privilege; his own internalized racism, self-loathing; Blade deals with cultural bi-polarism; Blade has to deal with economic and temporal class rifts!”

D.M.C. proudly calls Luke Cage his favorite, and name checks him in his song, “None Higher”: “Like Luke Cage I’m a hero for hire. Raised in the age of the vinyl record buyer.”

Grimm says Cage resonates with his life: “We have had similar trials and tribulations throughout our lives, and we both have had to overcome that struggle.  However, at the end of the day, we have become stronger for it. Loyalty, honor, family, and respect are ideals that I hold as sacred, and those are some of the cornerstones that make Luke Cage who he is.”

For Rock, he considers the best black Marvel hero to be James Rhodes aka War Machine and currently Iron Patriot, “because of all the cool gadgets he has—he’s a one-man army!”

War Machine followed Blade to the big screen in the Iron Man movies, but he first appeared in comics as combat pilot James “Rhodey” Rhodes in the late 70’s. In 1983 he reinvented himself as one of the first black characters to assume an established hero identity when he replaced Tony Stark as Iron Man.

"During my childhood, the heroes of color in the Marvel universe symbolized strength and courage," remembers MF Grimm. "They also showed me that people of color could be acknowledged as powerful, iconic figures who were the equal to their white counterparts."

Other black heroes that made their debut in the early 1980’s include Cloak, of Cloak and Dagger, who first appeared in SPECTACULAR SPIDER-MAN, and Monica Rambeau, the current Spectrum and former Captain Marvel, who first appeared in an AMAZING SPIDER-MAN ANNUAL in 1982. Black Panther has the honor of being the first black Avenger but Rambeau actually led the team. For a time during the late 80’s both the X-Men and the Avengers had black women in charge with Monica Rambeau and Storm.

The level of respect paid to these characters mattered enormously.

“During my childhood, the heroes of color in the Marvel universe symbolized strength and courage,” remembers Grimm. “They also showed me that people of color could be acknowledged as powerful, iconic figures who were the equal to their white counterparts.”

“I commend writers and artists for attempting to create a Marvel Universe that reflects the diversity of our actual world,” says Wimberly. “I would like to believe that seeing black characters could normalize the image of black people for the readership, but I suppose that has a lot to do with whether the characters are written properly or not.”

As with any new characters, some of these heroes may eventually slip into obscurity, but others will become major players in the Marvel Universe. Some will also follow Blade, Storm and James Rhodes onto the screen. Falcon makes his first live action appearance this year in “Captain America: The Winter Soldier” while Luke Cage will star in one of Marvel’s upcoming Netflix original series.

Perhaps no other hero who debuted in the past few years can be considered more important than Miles Morales, who took on the mantle of Spider-Man in the Ultimate Universe. Putting a black hero behind the mask of such an iconic character provides a new generation with heroes to identify with, just as Black Panther, Falcon, and Luke Cage stood as heroes for black readers a generation ago.

“[T]hese black heroes inspire us,” says Rock. “The comic book world had a tremendous impact on my life and I think on lots of other people’s lives as well.”

Grimm notes that seeing these heroes in the pages of Marvel comics, “reinforced the ideology that I could do whatever I put my mind to, and that there were no limitations unless I set them myself.”

Axel Alonso understands the importance of this legacy.

“This is modern mythology, and we’re the latest caretakers,” he says. “Marvel is all about racial diversity—and you can see it from T’Challa to Shang Chi to Storm to Miles Morales to Kamala Khan—but there is always room for improvement, and we will improve.”

Continue to celebrate the 75th anniversary of Marvel all year-long on marvel.com/75 and share your thoughts with us on Twitter using the hash tag #Marvel75