Everything changed for Spider-Man in 1988. Not only did the Wall-Crawler hit the big tricentennial with the 300th issue of AMAZING SPIDER-MAN, but he also met his match in the form of Venom! Better yet, these wildly important moments just so happened to be written by the legendary David Michelinie and drawn by Todd McFarlane—who had joined the book just a few months before and immediately began blowing Marvel readers' minds!

And on August 28, you can celebrate this issue in the third dimension with AMAZING SPIDER-MAN: VENOM 3D #1! Complete with a pair of signature symbiote 3D glasses, the new presentation will have you dodging webs and jabs right along with ol' Web-Head!

To prep for the merry mag, here's a little look back at what happened in this incredible ish!

At this point in his life, Peter Parker was married to Mary Jane Watson and they'd just moved into a new apartment together. Both were busy, living out of boxes, but happy. As Spider-Man, our hero wore a cloth version of his back costume, but had been separated from the actual symbiote since WEB OF SPIDER-MAN (1985) #1, when he used church bells to remove the alien from him after it became too dangerous.

Meanwhile, leading up to the big anniversary issue, readers continued seeing a shadowy figure who truly hated Spider-Man. To exact his revenge, this new villain appeared at Peter and Mary Jane's house and terrorized the woman of the house to the point where the very sight of Spidey's black costume sent her into near shock. Then, in issue #300, MJ told Peter what happened and he began suspecting someone had bonded with his old alien costume! After a nice dinner with Aunt May and moving into a new condo, Parker dedicated himself to tracking down this unknown foe. Borrowing a sonic blaster from the Fantastic Four, he went hunting!

Thinking that his Spider-Senses would keep him safe, Spidey found and followed his black-clad prey—then he unexpectedly found himself slammed up against a wall! Our hero was shocked when Eddie Brock revealed himself as the man behind the symbiote mask. The villain then explained that he was a columnist for the Daily Globe who interviewed a man claiming to be the Sin-Eater and even wrote a huge expose that was wildly popular...until Spider-Man found the real Sin-Eater!

During his downward spiral, Eddie began writing for tabloid rags that he hated and pumping iron to relieve stress. At the end of his rope, he went to a church to end his own life, but that just so happened to be the building that housed the bells that Peter used to remove the symbiote! The two bonded instantly over their intense hatred for Spider-Man.

After a fight across the city, Venom got the drop on Spidey and webbed him up inside those very bells! The Wall-Crawler managed to escape the death trap and used his head to finally take out this new foe. 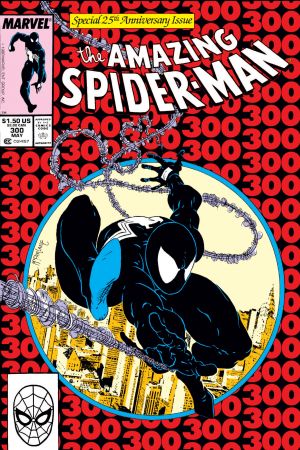 Though the issue ended with Spidey asking the Fantastic Four to lock up the symbiote separately from Brock, this was certainly not the last anyone would see of him and his alien pal. Over the next few years he appeared in a variety of Spider-Man comics, building up a reputation and fan-following that eventually lead to his first solo outing in 1993's VENOM: LETHAL PROTECTOR, kicking off a number of limited series and other appearances that turned the villain into a dark hero!

The Venom love, of course, didn't stop in the '90s. The character always seemed to be skulking around the darker corners of the Marvel Universe, but has experienced a new resurgence over the past few years, leading to huge events like VENOMVERSE (2017), his smash-hit solo series, and even the SAVAGE AVENGERS! And all of that goes back to the early days that shifted the Marvel Universe altogether!

Pre-order AMAZING SPIDER-MAN: VENOM 3D #1 at your local comic shop now, then pick it up on August 28!