What Happened When Doctor Doom Stole the Silver Surfer's Board

Read this week's 'Fantastic Four' #8, then explore Doom's past with the Power Cosmic!

Doctor Doom is no stranger to the Power Cosmic.

An incredible source of the one thing he craves most in existence? Yeah. He knows all about it.

So it should come as no surprise that he's finally figured out how to capture its source, Galactus, as seen in this week's FANTASTIC FOUR #8 by Dan Slott, Aaron Kuder, Stefano Caselli, David Marquez, and Reilly Brown! The Latverian leader revolutionized his own country by capturing the Devourer of Worlds and developing a means for drawing the Power Cosmic from him to power the nation as well as his own dreams for domination.

Doom and his own Herald, Victorious, captured the Fantastic Four and began telling the world and its stellar neighbors that he planned to continue harvesting this power so that Latveria could build a space fleet and spread its influence to other planets. However, the FF managed to work together in an effort to temporarily distract the despot in a truly shocking way!

While we're still reeling from FANTASTIC FOUR #8 and anxiously awaiting the next issue, now seems like a great time to look back at Doctor Doom's first dalliance with the Power Cosmic as seen in the classic FANTASTIC FOUR #57-60 by Stan Lee and Jack Kirby!

In the first issue of the 1966 story, the newcomer to Earth named Silver Surfer found himself officially summoned to Doom's castle upon entering the ruler's borders. The former servant of Galactus agreed and marveled at this human's scientific endeavors, but remained concerned about his potential for destruction.

While distracting the Surfer with a live feed of space, Doom donned a suit with inductors that sucked the shiny visitor dry of his Power Cosmic! And with all that energy coursing through him, Doom knew that he could challenge Galactus himself! Dubbing himself the "Master of all Mankind," Doom flew around on the Surfer's board and destroyed wantonly. 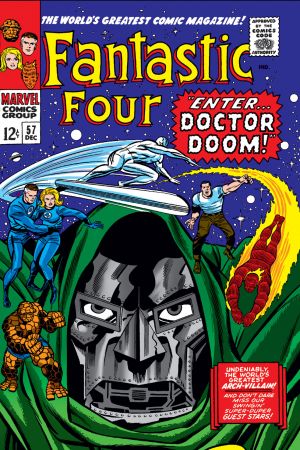 Doom soon remembered his greatest enemies and traveled to America to stop them. First, he battled the Thing to a stand-still in Manhattan, turning Grimm into a living statue. Then he got the drop on Mister Fantastic and the Invisible Woman at their beachside cottage. While the Human Torch burst in to the cottage to fight Doom, his pal Wyatt Wingfoot freed the Thing from suspended animation.

Reed and Sue, having escaped, met up with Ben and Wyatt outside as Human Torch continued to attack Doom. However, the fight ended when Reed Richards conceded that Victor had become unbeatable. Hearing this from his enemy's own mouth, Von Doom decided to keep the Fantastic Four alive so they could wallow in hopelessness as he conquered the world. 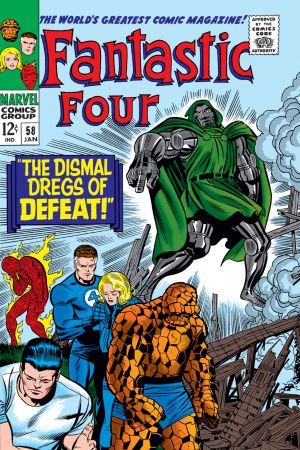 That decision would prove Doom's downfall as it gave Richards time to develop the Anti-Cosmic Flying Wing, which would not only leech some energy from Doom, but also temporarily weaken his and send him into a mad rage. The FF flew off to Latveria in a ship provided by the Black Panther once the device was finally operational. Though severely out-powered, the team did their best to distract the despot long enough for the Wing to show up!

With some of his power taken and that extra layer of rage applied, Doom flew off after the drone. What he didn't know, though, was that Galactus had sentenced the Silver Surfer to stay on Earth. So when Doom tried following the device beyond Earth's atmosphere, he exploded and the energy returned to its rightful owner! 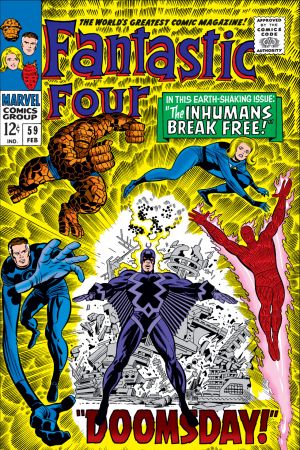 Reed and company didn't know what happened to their enemy at that point, but Doctor Doom would next appear in DAREDEVIL #36-38, and then showed up again to menace his old nemeses in FANTASTIC FOUR#84-87...and about a million more times after that!

Clearly Doctor Doom has learned from his past dealings with the Power Cosmic, but the real question seems to be if he's gotten over the arrogance which has so often blinded him in the past... We'll all have to check out FANTASTIC FOUR #9 to find out!