While trying to track down a fellow Avenger, T'Challa gets caught up in the search for Daredevil!

One of the reasons Marvel fandom became so dedicated and ravenous in the 60’s and 70’s revolved around the shared nature of the universe, especially in New York City. The Fantastic Four might take off for an adventure in their own series and then be seen flying overhead in an issue of AMAZING SPIDER-MAN. Or, while the Avengers search for a missing teammate, one of them would take a brief detour to help save a previously unmet fellow hero.

That’s the case with Black Panther in 1969’s DAREDEVIL #52 by Roy Thomas and Barry Windsor-Smith. At the time, T’Challa served with the Avengers and the group wanted to find the missing Hawkeye, but as the Wakandan searched New York, some police stopped him, mistaking him for Daredevil in the night. They informed him that the Man Without Fear might suffer from a fatal malady, so Black Panther took a detour to scour the city and find the red-clad hero.

Unbeknownst to T'Challa, Matt Murdock intended to give up his Daredevil identity, going so far as to pretend that his non-existent twin brother Mike actually filled out the costume and recently died. However, with Starr Saxon threatening to hurt Karen Page while also revealing the hero's true identity to her, Matt decided to don the threads once again. 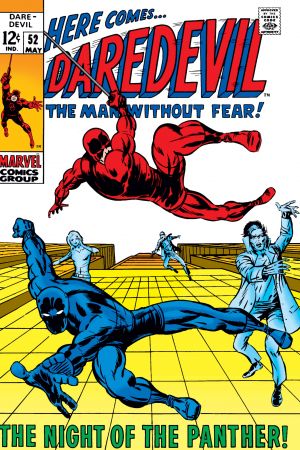 Before he can do that that, the nearly delirious blind lawyer from Hell's Kitchen knocked Black Panther unconscious, assuming his intentions to be less than pure. Undeterred, T’Challa gives chase, following Matt back to his apartment where Saxon holds Karen. Black Panther jumped in to save her life followed soon by Daredevil.

Saxon made a break for it and Daredevil told Panther he had it covered, but the Avenger elected to keep an eye on his new ally. Though DD proved more than capable of handling Saxon on his own, his actions proved T’Challa’s theory that he and Murdock remained one and the same. Our hero also watched as Daredevil lets Saxon go thanks to a lack of proof of any criminal activity. The Panther soon took his own leave vowing not to add to the hero’s baggage by revealing that he too knew the secret of Matt’s other identity.

Black Panther and Daredevil continued to cross paths over the years, but none more so than just a few years back when the latter asked the former to cover Hell’s Kitchen for him after the events of Shadowland.

As an on-again, off-again member of the Avengers, T'Challa holds the distinction of being the first person of color to earn the title of team chairman. Back in the mid-60’s the team cycled through leaders, called the chairman, every month as a way to keep the group more well-rounded and not put too much responsibility on any one member. Black Panther acts as chairman in AVENGERS #63 when he orders Hawkeye to stay back at headquarters while the rest of them look for Black Widow. Not one to follow commands, the archer dons one of Hank Pym’s old Goliath suits, downs a new growth serum, and heads out to find the Widow without his teammates knowing. Black Panther searches for him in DAREDEVIL #52, but the heroes return to base in AVENGERS #64. Unperturbed by Clint Barton’s brashness, Black Panther refocuses the team on their next target: a satellite blowing up Midwestern towns.

Dive into a discussion between the two stars.

The two talk about working with Tobey Maguire and Andrew Garfield.