Who Is the Newest 'Captain Marvel' Villain?

Pair this week's 'Captain Marvel' #5 with a look back at the debut of Nuclear Man!

In this week's CAPTAIN MARVEL #5, Carol's battle with Nuclear Man comes to a head!

The hero's rebellion forces have launched their final desperate assault for control of Roosevelt Island, but Nuclear Man has an ace in the hole—and stopping him will take everything Carol’s got. The life of every man, woman, and child on Roosevelt Island rests on Carol’s shoulders. And she’s about to show Nuclear Man why they call her “Earth’s Mightiest Hero”!

But what's Nuclear Man's whole...deal? Well, debuting in 1974's FANTASTIC FOUR #151-153 by Gerry Conway and Rich Buckler, the villain originally known as Mahkizmo (say it out loud) earned the First Family's attention by lighting the Baxter Building up like Broadway before attacking the Human Torch and the Thing. Glowing with power and rage, he demanded to know the whereabouts of Thundra, who had assisted the team in their previous mission.

Thundra hailed from a potential future where women, called Femizons, ruled, while Mahkizmo came from yet another future, dubbed Machus, where barbaric men led the world. Somehow, the two realities began merging, which is why Thundra traveled to the past in the first place.

Meanwhile, in battle with Blue Eyes and Jonny, Mahkizmo let slip that he'd been granted his title and the power of the Nuclear Man above all else in his society. He then used those abilities to cold-cock both heroes. He then did the same to Mister Fantastic when he happened by. But that still left Thundra and fellow FF ally Medusa to contend with the chauvinist powerhouse. However, when Thundra and Mahkizmo finally came to blows, their energy seemed to merge and they disappeared. Assuming they'd traveled to their merging future, Reed modified Doctor Doom's time travel device and used it to give chase. The pursuers included himself, the Thing, the Torch, and Medusa, while Sue stayed back to take care of baby Franklin. 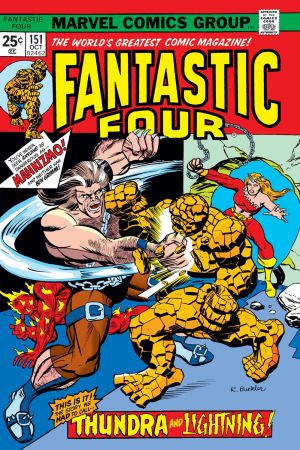 Once there, the team was quickly overpowered and locked up. Mahkizmo had taken a liking to Medusa who used a private audience to knock him out with a wine bottle and escape not just his clutches, but that entire timeline...which did not sit well with her teammates.

Thrown into cages and treated like lesser beings, the male members of the Fantastic Four found themselves the victims of this ultra-masculine society to the point where Mahkizmo first labeled them as weak and then explained that weak men are killed there. When Ben talked his usual trash, Reed tried quieting him. "Don't anger him, Ben. Eons of unthinking domination have reduced most of Machus' population to fanatics. With no one to offer them an opposing viewpoint in centuries, they've stagnated mentally."

As it turned out, Mahkizmo had control of a weapon called the Domina-Ray which he used to weaken Ben, Reed, Johnny, and Thundra, before throwing them into an arena to fight the Three-Who-Wait, Rampager, and then the Nuclear Man himself! And though they fared well against their other opponents, the FF could not stand up to Mahkizmo's might. Luckily, just when it looked bleakest, Medusa appeared with a battalion of Femizons! 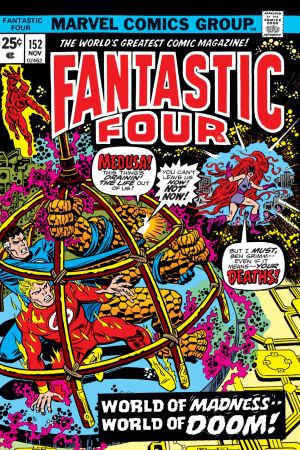 Still, the Domina-Ray continued to weaken all foes of Machus until Medusa (unaffected because of her Inhuman heritage) held off the oncoming hordes so that Reed could direct Johnny in the fine art of destroying the inhibitor! With his unfair advantage a thing of the past, Mahkizmo did his best to power up his nuclear power-punch, but couldn't get it off before the combined might of Thundra and the Thing destroyed the dastardly dude. Unexpectedly, though, that release of nuclear energy fused the two futures together so that the results would not harm other realities.

And with that, the FF and Thundra returned to the present Marvel Universe of the mid-'70s. For his part, Mahkizmo only appeared a few more times before showing back up in CAPTAIN MARVEL earlier this year, specifically in an arc of SENSATIONAL SHE-HULK starting with issue #34, but really kicking into gear with issues #38-39. If you're wondering, no, he didn't stand a chance against the hero! 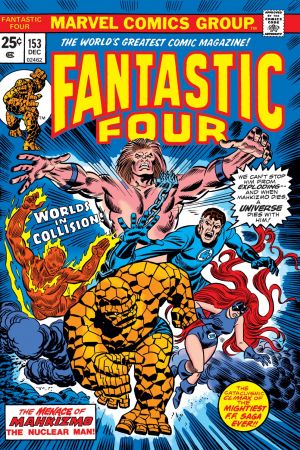 He also showed up in a few scenes in FANTASTIC FOUR: FOES, until Kelly Thompson and Carmen Carnero dusted him off for a fight against Carol Danvers, culminating in a battle inside this week's CAPTAIN MARVEL #5!

Read the issue at your local comic shop right now!