Talking 'Spider-Verse,' Jessica Drew, and more with the all-star scribe!

Over the past two decades, few characters have enjoyed the type of renaissance associated with Jessica Drew. The latest SPIDER-WOMAN ongoing series from Karla Pacheco, Pere Perez, Paulo Siqueira, and company represents a new chapter in a journey that kicked off when Brian Michael Bendis brought the cult favorite to prominence as part of NEW AVENGERS (2004). However, in between, Drew starred in a much-loved reinterpretation that tweaked everything from her look to her status as a parent!

“I was super hungry for something new when I got the SPIDER-WOMAN call,” states writer Dennis “Hopeless” Hallum of his status circa 2014. “CABLE & X-FORCE (2012) and AVENGERS ARENa (2012) had both ended around the same time. I was trying to find the perfect follow-up project when [editor] Nick Lowe called. I already loved Jessica Drew so it was a super easy and immediate ‘Yes!’”

That affection blossomed during the aforementioned NEW AVENGERS run, as well as the Bendis and Alex Maleev take that cast Drew as an Agent of S.W.O.R.D.—something Hallum calls “one of my favorite modern super hero stories.” Upon getting the gig and deep diving into Jessica’s origins, the writer found a “dark and convoluted” history he also considers “delightfully bizarre” and praises her growth “into one of the most relatable characters in the Marvel Universe.” 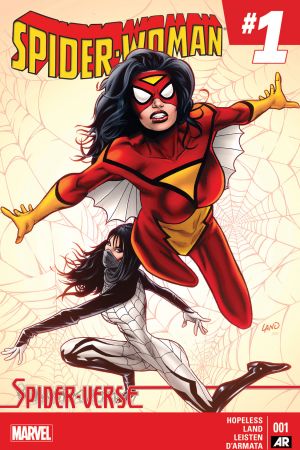 Once he signed on, Hallum worked toward the goal of “[humanizing] Jessica and [focusing] on her non-existent personal life.” Between her tenure with Earth’s Mightiest as well as key role in the SECRET INVASION (2008) series and following, Spider-Woman had become a major player in the wider Marvel Universe, but the writer hoped more down-to-earth tales could increase the character’s depth.

After she finished one more epic event.

“SPIDER-VERSE was the big weird caveat of this dream job,” Dennis details. “Jess hadn’t had a solo series in a while and everyone wanted to put our best foot forward sales-wise, so the idea was to launch in the middle of the big event. Let’s just say it was a great learning experience…because I more or less completely dropped the ball.

“Crossovers are always big, unwieldy story beasts, and this one was massive. Like an idiot, I jumped right in the middle of it, hoping to dance between the raindrops. What we ended up with is a really fun four issues that make perfect sense if you’ve read every other issue of SPIDER-VERSE—and almost zero sense on their own.”

After those first stutter steps, Hallum found his groove with SPIDER-WOMAN (2014) #5, which heralded a fresh look for Jessica designed by new series artist and colorist Javier Rodriguez, whom he credits along with inker Alvaro Lopez with elevating "every panel.” 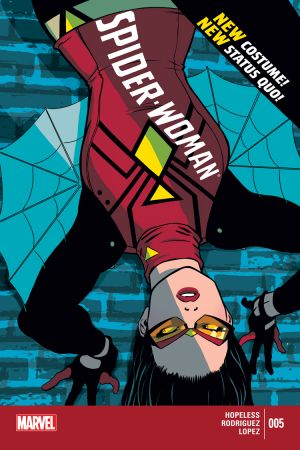 “Javier and Alvaro and [subsequent artists] Veronica [Fish] and Tigh [Walker] are some of my favorite collaborators ever,” sounds off the scribe. “The book wouldn’t be what it was without those incredible artists. Most of my job was staying out of their way. I’ll never be able to brag enough about that art team.

“Our editors too; Nick [Lowe] and Devin [Lewis] walked the road right along with us and helped me avoid all of the pitfalls. With their guidance, we navigated a butt cover [crisis], my first event tie-in, and a major mid-series artist change without missing a beat—and came out the other side with a really special story.”

Getting to Know Jess

In order to deliver that story, Hallum insisted on the importance of moving Jessica away from the Avengers in order to focus on “the woman underneath” and ask “what does 'normal' look like for Spider-Woman?” At the behest of Lowe, the supporting cast centered around longtime Marvel staple Ben Urich as Drew’s partner-in-investigation. “Ben sees all the angles and wants to help but needs somebody else to be the muscle.”

And then there’s Porcupine.

A legacy Super Villain who had run afoul of the Daughters of the Dragon and Fantastic Four in years prior, Roger Cocking enters Spider-Woman’s orbit on the back of an inciting incident involving his estranged family that endeared the prickly powerhouse to Jessica—and readers.

“Roger is the happiest accident of all time,” Hallum admits. "I love the Porcupine suit. It’s my favorite costume in the history of the Marvel Universe. I’ve always thrown Porcupine in the mix anytime a story called for a Super Villain group scene. He shows up at Arcade’s birthday party in AVENGERS ARENA and we see him hanging out in Bagalia in AVENGERS UNDERCOVER (2014). So when Nick and I were picking out villains for SPIDER-WOMAN, Porcupine was the first name I wrote down. Then for whatever reason I wrote a scene with Roger tied to a radiator, arguing over cereal bowls [with Jessica]—and my favorite lovingly antagonistic relationship in comics was born.

“I wasn’t trying to write Roger like The Dude from Big Lebowski. I didn’t know there’d be so much chemistry between him and Jess. It all just happened to us.” More on that in a bit…

Just as things seemed to convalesce for the SPIDER-WOMAN cast and creative team, a major fork in the road called SECRET WARS necessitated the end of the volume at 10 issues, a brief hiatus, and then relaunch. The break actually afforded opportunity for a writer busy on both the professional and personal fronts. “My twins had just been born,” Hallum notes. “I had a very tight window to work in each day and my focus was on hitting deadlines. I needed to keep Javier fed and my head was down typing. So even though we had plenty of lead time to prepare for SECRET WARS, I didn’t give it a ton of thought until we were already in it.”

“All of the relaunches were jumping ahead eight months. Every series needed some big change or new conceit, and like I said, I wasn’t even really thinking about it leading up. Then one day Nick called to talk story ideas while I was knee deep in two babies…I said, ‘It’s an eight-month jump, why don’t we make Jess pregnant?”

While the prospect of Super Hero mothers had been explored throughout history from Sue Storm to Jessica Jones, SPIDER-WOMAN promised a fresh take on the dynamic. With time to marinate, Hallum’s proposal gained momentum and launched his second Spider-Woman series. 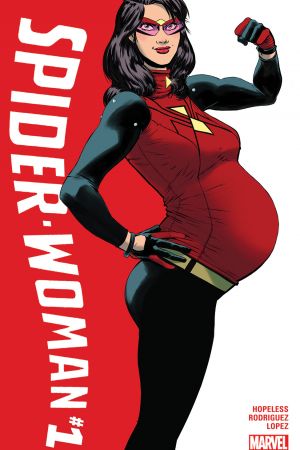 “The more I thought about it, the more I loved that idea,” he insists. “Jessica Drew quit the Avengers in order to live a normal life. What better way to hit her over the head with ‘normal?’ Nothing is more overwhelmingly normal and terrifying than new parenthood. So when I came to the creative retreat to pitch the relaunch, pregnant Jess was my one and only pitch. Fortunately the room loved it and we got to tell my favorite story of my career.”

Over the course of the next 17 issues, Hallum and his collaborators would guide Jessica through one of the most well-regarded periods in her creative career, highlighted by cross-dimensional team-ups, conflicts against the likes of Hobgoblin, and lessons learned along the way to—a happy ending?

“At some point I realized Roger had fallen in love with Jess,” the writer recounts. “She was too wrapped up in juggling everything to notice, and all of that seemed worth exploring. I never expected Jess to reciprocate—until after she thought he died, and I had to write her processing all of the feelings. Their relationship might be the most organic thing I’ve ever written, and it’s why we ended the series when and where we did. Those two deserved a happy ending.”

Several years removed from SPIDER-WOMAN, Hallum remains proud of his contributions to the canon. Jessica Drew’s life will never be the same, and she can thank the authors of her 2014 and 2015 adventures for much of that progression.

“Our second fifth issue is my favorite thing I’ve ever written,” touts Hallum. “I still don’t know how Javier and Alvaro turned the dialogue-stuffed new parenthood play I wrote into a comic book. It was impossible to draw as written and they did it anyway. Every panel of that thing makes me smile. And then Veronica’s splash page of Jess and Roger’s first kiss gives me butterflies. 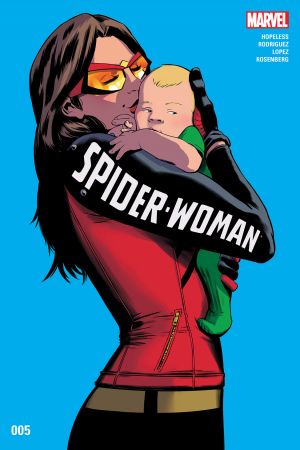 “More than anything, what we tried to be was honest. So I hope that’s how people remember our SPIDER-WOMAN run, as something different and maybe a little bit niche and weird, but also super duper honest. It’s a story about people being people. Doing the best they can despite being just as broken and confused as everybody else.”

Spider-Verse writers Dan Slott, Karla Pacheco, and Maurene Goo explain what sets Spider-Man and all his variants apart from other super heroes and more.

What If "Thwip" Was Outlawed?!

Take a wild ride across the Spider-Verse with creators Dan Scott, Karla Pacheco, and Maureen Goo!