Now's your chance to own Kilgrave's purple suit 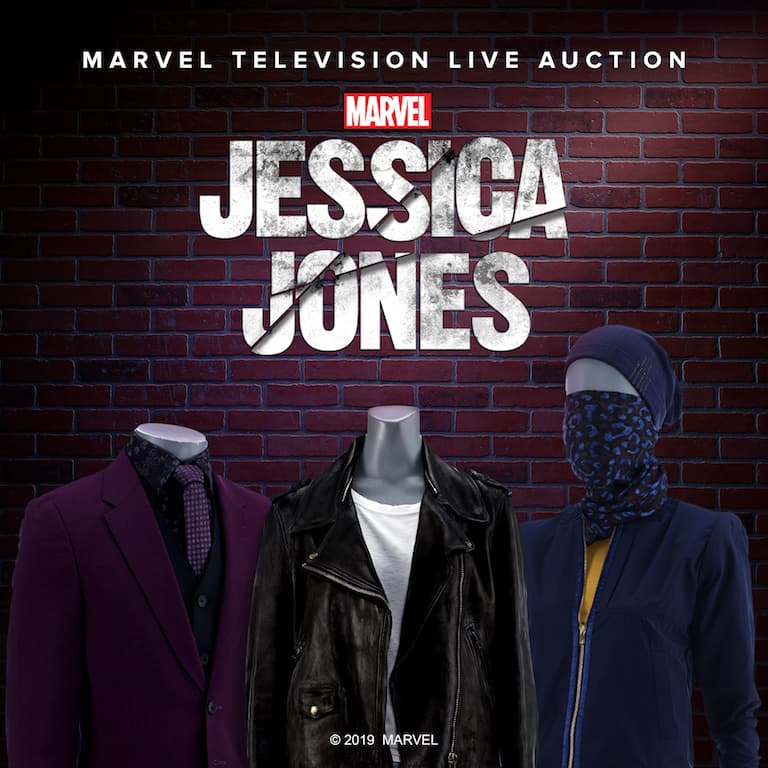 If you’ve ever wanted to own Kilgrave’s purple suit or anything from Jessica Jones’ desk — including her actual desk and everything on it — now is the time. Over 400 lots will be offered in this live auction starting in December 2019, with many items starting at a bidding price of $50. Items starting at the price of $50 include Trish Talk framed posters, “Patsy Walker” comics, Gregory Sallinger’s Wrestling Trophy, and Jessica Jones' camera for your own budding private investigator career.

There are literally hundreds of other items available too, but their going price is a little bit higher than $50. The suit Kilgrave wore in the police station during Season 1 (which includes his shirt and tie), is expected to go for above $3,000, with Jessica’s white horse daydream costume fetching around $1,000. Other full costumes include Trish Walker’s Classic and Heroic Hellcat costumes, and Jessica’s Jewel prototype costume, the one that she never actually wore (even though Trish tried to get her to put it on) and referred to it only being worthy of trick-or-treating.

On top of that, Prop Store is offering a free chance to win a Jessica Jones Alias Investigation business card to five lucky winners who register for the auction before November 20, 2019. Complete contest rules can be found at: www.propstore.com/marvel

“Prop Store is thrilled to be able to host our second auction with Marvel to offer fans most iconic props, costumes, and set dec from Marvel’s Jessica Jones,” Chuck Costas, VP of Business Development & Operations for Prop Store, commented on the upcoming auction “The series was groundbreaking and resonated with Marvel fans in so many ways that it is a real honor to be able to bring this auction to the public. With over 400 pieces in this auction, we believe there’s something for everyone at all price points. Whether you’re after an Alias Investigations business card, or Jessica’s trademark, black leather jacket, there should be plenty here for fans of this incredible series.”

Mike Pasciullo, SVP, Marvel Marketing and Communications, continued: “In the backdrop of Hell’s Kitchen, Marvel’s Jessica Jones explored what it takes to be a hero. Fans will get to relive key moments in this thought-provoking series through the items being presented in this auction.  We wanted to provide ultimate Marvel fans with an opportunity to own an authentic piece of this part of the Marvel Universe."

Fans attending New York Comic-Con 2019 will get an early look at some of the 400 lots available during the auction, which will be on display at the Marvel Booth (#1354). An auction preview is now available at where bidders can register early, and for more auction information and subscribe for e-mail updates, please go to: www.propstore.com/marvel.

Now's your chance to choose from over 500 original props, costumes, and set decoration items from all the Marvel television series in the Defenders Saga!

In honor of Rek-Rap's debut, here are a few other characters who were inspired by Spider-Man to become heroes, including Miles Morales and Jessica Jones.

Costumes and props from Daredevil, Elektra, Jessica Jones, The Punisher and more!