This Week in Marvel History: May 3-May 9

With Marvel celebrating its 80th anniversary this year – and to scratch my own history and research itches – every week I’m digging through a whole host of important dates and details for a special segment of This Week in Marvel called… (wait for it) … This Week in Marvel History! Important comics, storylines, character appearances and moments, real world releases and special Marvel milestones—it’s all part of TWIMH! Here are just a few Marvel History notes for the week of May 3-May 9!

1966: Melvin Potter aka Gladiator, debuts in DAREDEVIL #18 by Stan Lee and John Romita Sr. I LOVE HIS COSTUME SO MUCH.

1977: Wolverine’s archnemesis Sabretooth debuts in, of course, IRON FIST #14! It actually makes a ton of sense, with Sabretooth being a major X-Men character, since Chris Claremont and John Byrne worked on this IRON FIST issue!

2013: Marvel Studios’ “Iron Man 3” was released in theaters. There are so many terrific moments—House Party protocol, anyone?! I still have a promo tee that we gave out at Comic-Con, a white A.I.M. tee like the one Killian wears.

2007: “Spider-Man 3” landed in theaters. Lots of folks have lots of opinions on this one, but I find a lot to enjoy in it.

2012: Marvel Studios’ “The Avengers” arrived in theaters. I remember sitting in a pre-release screening next to C.B. Cebulski, a few weeks before it came out. I was a little nervous. The Marvel Studios movies had been fantastic, of course, but this was the big one. Could they do it? As soon as credits rolled, I think I slapped C.B. on the arm or shoulder just out of sheer joy and delight because THEY CRUSHED IT. Just absolutely floored by it. I also got to visit the set in New Mexico, which was REALLY neat.

1964: The Masters of Evil debuted in AVENGERS #6 by Stan Lee and Jack Kirby. The OG Masters were Baron Zemo, Radioactive Man, the Melter, and the Black Knight. Spoiler: the Avengers win, and the last panel has Thor sitting atop the Knight’s winged horse.

1992: Terror Inc. debuted in the Marvel Universe in TERROR INC. #1. He’s a gnarly green dude who takes peoples’ dismembered limbs onto himself and gains their talents and abilities and such. GNARLY, I SAY.

1989: “The Trial of the Incredible Hulk” aired on NBC, the second of three Incredible Hulk TV movies. Bruce Banner was a witness in a trial that’s connected to the Kingpin! We got black costume Daredevil teaming up with Hulk. Fun stuff!

2010: Marvel Studios’ “Iron Man 2” arrived in theaters. I ride hard for Justin Hammer in this movie. He’s THE BEST!

1973: Zzzax sparked across the pages of INCREDIBLE HULK #166! I love Zzzax! Three z’s and an x! Last entry in the Official Handbook of the Marvel Universe. Big ol’ electricity monster!

1984: Forge made his first appearance in UNCANNY-X-MEN #184. Forge has the mutant power to build anything. Boom. So rad.

1990: The crossover event DAYS OF FUTURE PRESENT began and introduced the villain Ahab. Ahab hunts mutants, and was most recently seen in EXTERMINATION and the pages of X-FORCE. 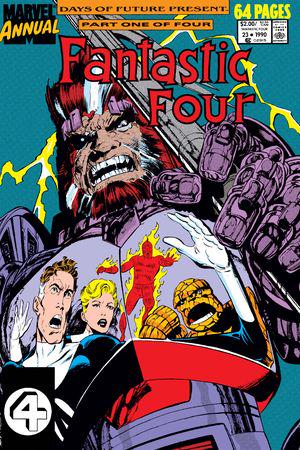 1968: Ultron debuted as the Crimson Cowl in AVENGERS #54. Sneaky robot!