Why Mystique Is The Best Villain We Love To Hate In 'X-Men: Evolution'

Six reasons to avoid this shapeshifter!

Mystique, the mutant that can change her appearance to mimic anyone, always gets what she wants using her powers and does so with an abundance of aplomb.

In X-Men: Evolution, Mystique starts out as the principal at Xavier’s School for Gifted Youngsters, but secretly she really works for the Brotherhood, a band of mutants led by Magneto who contend with the X-Men for new recruits. She often uses her position at the school to manipulate events and students — especially that of her adoptive daughter and newly enrolled X-Men recruit, Rogue — as well as her powers of visual persuasion. But her machinations don’t stop there!

With the series now streaming on Disney+, here are a handful of reasons Mystique’s manipulations make her the best villain we love to hate — it all starts with Rogue.

In trying to recruit Rogue into the Brotherhood, Mystique attempts to divide her adoptive daughter and the merry mutants. On a school field trip, she replaces Jean Grey with Rogue to teach Rogue a lesson that these new mutants she’s trying to prove herself to aren’t really her friends...and it almost works until Mystique reveals herself and her intentions.

Mystique’s motivations to recruit mutants into the Brotherhood are simple: She believes Charles Xavier uses the young mutants as puppets and because of her relationship with Rogue, desires to protect her from his lies. As Rogue’s adoptive mother, which isn’t revealed until Season 3, she often acts an overbearing parent but does it in all the wrong ways. 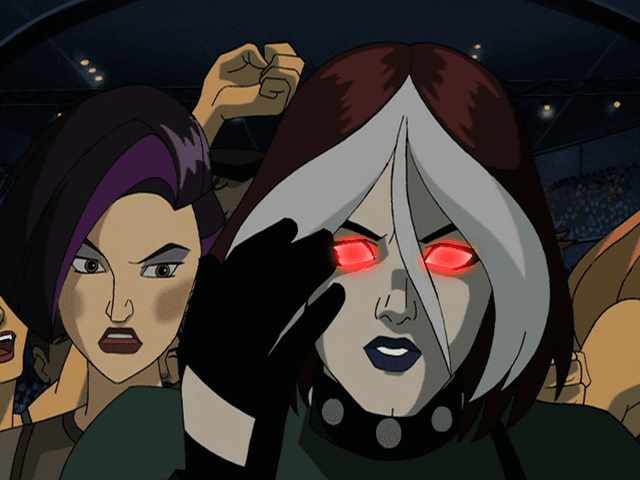 Throughout the series, Mystique poses as the student Risty Wilde. She uses this cover to steal Xavier’s Cerebro files for her Brotherhood recruitment efforts, and while acting as Risty, she befriends Rogue to stay close to her. Her desires are driven by a selfish need to have Rogue in her life but because she lies for so long, it makes us distrust her for being so deceptive in the first place.

It’s easy to get mad at Mystique considering that she’s always trying to thwart the X-Men, but she’s not really in charge. Magneto is the true head honcho of the Brotherhood, but she takes decisive action when he’s absent. So, we give her an inch and just maybe we can forgive her for her wrongdoings…even for that one time she posed as Xavier and paired the X-Men with the Brotherhood to face off against Magneto.

After lying to the X-Men as Xavier and assisting in blowing up Xavier’s mansion, Cyclops outs her for fooling everyone. Though Mystique’s feathers aren’t ruffled, she remains calm, collected and ever the threatening adversary. Her cool blue exterior reveals that despite her failure, she’ll bounce back. 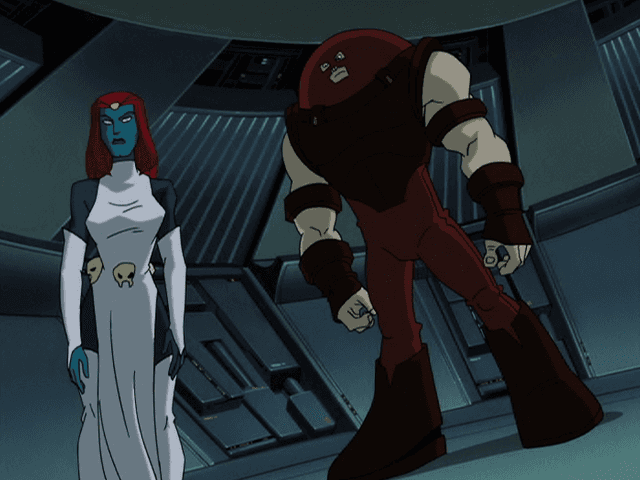 Adding Fire to the Flames

While Beast and Storm try to stop the anti-mutant crowd at the Senate, Mystique releases Juggernaut, AKA Cain Marko, from his containment cell. He threatens to destroy a dam which bolsters the Senate’s anti-mutant sentiments and threatens mutant rights. The X-Men students stop Juggernaut and prevent a catastrophe, and in turn, it proves to the Senate that there are mutants who use their powers for good. So it almost begs the question, was that Mystique’s goal the whole time?

While her motivations to protect Rogue throughout the beginning of X-Men: Evolution seem noble, she ends up creating more friction between Rogue and herself, and as a byproduct between the Brotherhood and the X-Men. She is so good at being the catalyst for conflict that it makes her the best Super Villain we love to hate. Really we’re just jealous at how devious she is and that she gets away with it…most of the time.

In this article: Disney+, Mystique, X-Men