It might seem strange in today’s colorful, diverse Marvel Universe, but there was a time when such a thing as a Super Hero of Latino heritage wasn’t taken for granted and in fact deserved to be called groundbreaking.

Such a time was the early 1970s, at the height of both the martial arts craze that swept the nation and Marvel’s attempt at black and white magazines to capture a different readership on the newsstands. Those two unique entities came together in a series enthusiastically entitled DEADLY HANDS OF KUNG FU, a large-size publication that not only boasted of edgier stories from the sweatier side of the tracks, but also as a home for some of the first art by one of the company’s rising superstars.

When writer Bill Mantlo and illustrator George Perez teamed up to bring an end to the “Sons of the Tiger” strip in 1974’s DEADLY HANDS OF KUNG FU #19, opportunity knocked and Marvel’s first Latino Super Hero was born—one who just happened to share some traits with one of his creators.

“As best as I can remember, the idea of creating the White Tiger was initially brought up by my Sons of the Tiger writer and collaborator Bill Mantlo during a weekend somewhere in Long Island, NY,” Perez recalls.

“Figuring that we had pretty much dredged the well of ideas for the Tiger Sons, we wanted to go in a different direction and, since he was working with a Puerto Rican artist from the Bronx, Bill suggested creating a character utilizing my experience and background. And, as simply as that, the White Tiger was born.”

In the story, the “chop-socky” Sons set aside their mystical amulets and abandoned their team to the ages. A young man named Hector Ayala, a Puerto Rican living in, yes, the Bronx, happened upon the amulets and when he donned all three at the same time became one of the greatest martial artists of all.

For Perez, it felt like a natural process of comic book creation, though he concedes Mantlo might’ve sensed the time was ripe for the industry’s first Puerto Rican costumed crimebuster.

“Being probably more socially conscious about such matters than I was at the time, Bill was probably more aware of the significance of creating the first Latino Super Hero to star in his own series,” says the artist.

“For me, it was a bit more organic, considering the White Tiger was replacing the series leads that already included an Asian and an African American along with various other ethnic characters like Lotus and Nathaniel Byrd.

“That said, I did feel a special connection with Hector Ayala—whose name was one I chose based on some neighborhood friends—since it was a novelty for me to draw from my own life experiences to create Hector’s inner city world, both visually and atmospherically.” 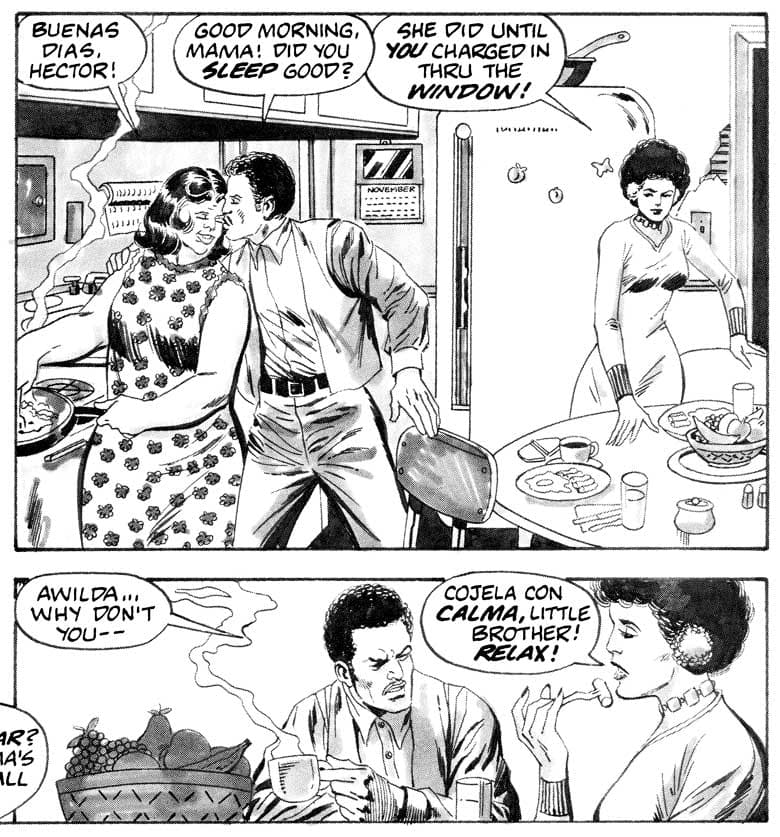 To fans of Perez’s incredibly detailed art, his almost Spartan design for the White Tiger’s look could appear to be something of a conundrum.

“For someone known for designing some pretty intricate costumes, the simple, streamlined look of the White Tiger was definitely a conscious decision to try something different, and one that emphasized the word ‘white,’” he notes. “In hindsight, I probably should have added some stripes to the costume, but Bill seemed much more enamored with the sheer stark elegance of the white costume. And since it was a black and white magazine, it definitely worked for that format. The facial look for Hector Ayala was based on my brother David, while his mother was definitely inspired by my own.

“As far as his [physical] movements, I simply tried to incorporate some martial arts moves with exaggerated comic book action, pretty much as I had been doing with the Sons of the Tiger.”

The White Tiger kung fu’d his way through DEADLY HANDS OF KUNG FU right up to the penultimate issue in late 1976, even dominating a few of the book’s covers from time to time, and then segued into the regular color comics with SPECTACULAR SPIDER-MAN #9 in 1977. By all accounts, martial arts mavens embraced him as a character they loved to follow.

“I didn’t get to see too many of the letters that came in, although Bill Mantlo did keep up with that stuff,” Perez says. “I did read the letters that were actually printed in the letters page and was gratified that the character seemed to be holding his own and actually becoming more popular than the original series leads.”

Alas, Hector Ayala’s career ended in 2003’s DAREDEVIL #40, but his legacy continued with no less than four more White Tigers over the years to carry on his mission, some of them even family members of his.

For George Perez, the character remains a source of pride, though one that grew with time into its present role in his body of work.

“At the time I was actually drawing it, I really thought nothing about any special significance to the character," the artist admits. “It’s only in the context of history and the comments and compliments that I continue to get from many Latino fans who cite the White Tiger as an important touchstone in their lives, and how inspirational it was for them to have a comic book hero they could personally identify with, that makes me realize what an impact White Tiger actually had. The fact that the White Tiger was a Latino hero created by a Latino artist probably added to that feeling of inclusion.

“How can I not help but to feel a little proud of that?”

Who is the teenage Champion that leaps into danger? Artist and co-creator Humberto Ramos shares what makes this Marvel Super Hero so special!

The 'Empyre' colorist sits down with Marvel.com to discuss his comics relationship and career.