Read ‘Black Panther: The Intergalactic Empire of Wakanda’ for free on Marvel Unlimited.

Since his first appearance in FANTASTIC FOUR (1961) #52, Black Panther has established himself as more than a Super Hero. T’Challa is a king and the champion of Bast, Panther God and patron deity of Wakanda. For years, T’Challa has worn the Panther’s suit to thwart any challenge against Wakanda’s destiny. But Wakanda is more than a country. In BLACK PANTHER (2018), the most technically advanced nation on Earth expands far beyond our atmosphere, rising as a universal power that spans galaxies and empires.

Creators Ta-​Nehisi Coates, Daniel Acuña, Kev Walker, Jen Bartel and more, present “The Intergalactic Empire of Wakanda,” the story arc that is still playing out on the pages of BLACK PANTHER (2018). Right now, issues #1-6 are available to read for free on Marvel Unlimited, the series’ first volume.

At the start of this outer space epic, Coates and Acuña threw T’Challa into the deep end, robbing him of his kingly status. Familiar faces returned in new roles, while an old enemy claimed Black Panther’s mantle for themselves. This run is easily one of T’Challa’s most daunting ordeals to date, simply because the fate of the universe rests on its outcome. 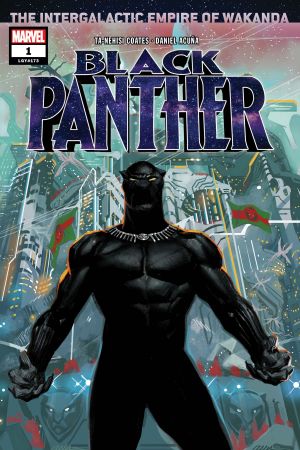 Before jumping into BLACK PANTHER (2018) #1-6, here are a few key takeaways to help set the intergalactic stage.

WAKANDA: IT’S AN EMPIRE TOO

Thousands of years before BLACK PANTHER (2018) #1, colonists from Wakanda became Earth’s earliest spacefarers when they expanded their reach into the cosmos. Over time, the colonists’ technical and military prowess led them to overrun previously-established orders. The Intergalactic Empire of Wakanda is not a misnomer—countless alien races live under their rule. Some of these groups have also become enthusiastic converts to their cause.

Yet the heart of Wakanda is empty. This empire lacks the virtues upon which their society was built.

When we catch up with T’Challa in issue #1, the former king has fallen far from glory, and is now a slave of the empire. Bereft of his memories, T’Challa still possesses his fighting spirit. The true Black Panther is always the Black Panther, regardless of his circumstances or place. But T’Challa is more lost than we’ve ever seen him before, in desperate need of allies, or at the very least, a clue.

In an odd twist of fate, a rebellion against the empire is instigated by two of Black Panther’s enemies: M’Baku and Nakia. Within the Marvel Universe, T’Challa has often been at odds with M’Baku, while Nakia was once one of T’Challa’s Dora Milaje. But Nakia fell from grace in BLACK PANTHER (1998) when she became Malice. Nakia recently perished in AVENGERS: WAKANDA FOREVER (2018) #1 with at least a measure of redemption.

These iterations of M’Baku and Nakia are both courageous heroes of the Maroons, an anti-Wakandan resistance led by an alien named Captain N'Yami. Many of the Maroons wear outfits inspired by the Black Panther himself. This group also gives T’Challa back his name, even though most of them aren’t fully aware that he is truly a king of legend.

STORM ON THE MIND

Throughout the first six issues, T’Challa’s dreams are haunted by a beautiful woman with white hair and blue eyes. His memories are shattered, but readers easily recognize her as Storm, AKA Ororo Munroe, of the X-Men. Storm was once T’Challa’s wife, and she may still be the love of his life. Even when separated by an unimaginable distance, T’Challa’s mind turns to her.

At the same time, T’Challa and Nakia feel an undeniable pull toward each other. But without any memories, T’Challa simply can’t move on.

THE CASE OF THE STOLEN MEMORIES

Apparently, T’Challa’s amnesiac plight is not uncommon in the Wakandan empire. As explained by Nakia in issue #3, the empire has a standard practice of stealing memories and mining them for intelligence. She also offered T’Challa hope by revealing a potential plan to reclaim what was once his. But those ambitious designs were soon overthrown by the empire.

Meanwhile, X-Men fans and longtime readers were given a quick look at the M'Kraan Shard. This is a fragmented piece of the M’Kraan Crystal, the cosmic relic that played a major role in “The Dark Phoenix Saga” and the AGE OF APOCALYPSE event. At full power, the M’Kraan Crystal can affect reality itself. And even a fraction of that power is immense.

In issues #3 and #4, the empire unleashed Manifold upon the rebels, and he single-handedly decimated their forces. Intriguingly, T’Challa had a flash of memory and saw the face of Eden Fesi, former member of the Secret Warriors and a staple of Black Panther’s Crew. Manifold was a valued member of both teams, given that his ability to teleport across space-time always comes in handy.

But the empire’s Manifold uses his abilities to kill and maim. It is because of Manifold that the Maroons lose one of their top leaders, taking half a decade to recover from that blow.

On Earth, Erik Killmonger was the Black Panther’s deadliest foe. In the empire, Killmonger’s namesake, Lord N'Jadaka, rules as the Black Panther. He is the chosen son of Bast, but N’Jadaka has also joined with a Klyntar, one of the symbiotes from the same race that spawned Venom.

N'Jadaka’s ambitions go far beyond the boundaries of the empire. And, in issue #6, he takes some shocking steps to shore up his power. N’Jadaka’s ascension has been secured, and the heavens truly have cause to tremble. 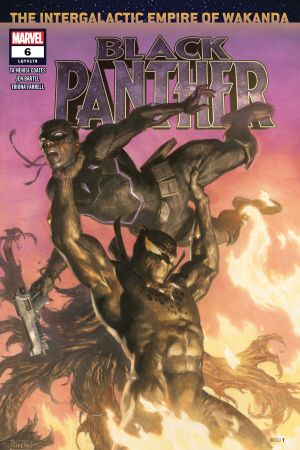 Want to find out what happens next? Head over to Marvel Unlimited, and jump into BLACK PANTHER (2018) today!

Get a head start on your holiday shopping lists!

Enter a world without Avengers in ‘Heroes Reborn,’ plus new solo series starring Shang-Chi and Reptil!

The Many Faces of Kang

Get to know the Conqueror and all his major variants!