Sometimes people are just in the right place at the right time…like a certain Jungle Lord of our acquaintance.

We’re talkin’ ‘bout the mighty Ka-Zar, of course, True Believers, and while he’s at his swingin’ best when jauntin’ through the jungle, he’s been known to rub elbows with some of the most marvelous monuments of the Marvel Universe from time to time!

While we’re waitin’ to wax poetic over our savage sir alongside Earth’s Mightiest Heroes in next week's EMPYRE: AVENGERS #1, let’s look back at a few of Ka-Zar’s early encounters with the Super Heroes well all know an’ love! And if you’re just not careful, you might learn something while we’re at it!

Didja Know… Ka-Zar was first thought to be a mutant?

Right out of his starting gate and into the riotous racetrack of Marvel madness, the Jungle Lord was libelously labeled a mutant…by the X-Men themselves! And they oughta know, right? Well, Professor X told his teen-age titans they were wrong, but as it transpired in UNCANNY X-MEN (1963) #10, it was reason enough to track the man down and see what made him tick-tock!

The merry mutants hustled off to Antarctica to see if they could find the noble savage, and find him they did—along with a whole loony land of dinosaurs that could only be called the Savage Land. Ka-Zar and Zabu, his sabretooth sidekick, helped the X-Men rescue the Angel and Marvel Girl from a dude named Maa-Gor and his malicious Man-Apes, and later sealed off the tunnel the mutant misfits used to access the hidden paradise where the deer and dinosaurs play…

Here’s the kicker to the exciting equation of Super Heroes and Savage Lands: it wasn’t Ka-Zar who was the mutant all along, but that crazy cat at his side, Zabu! 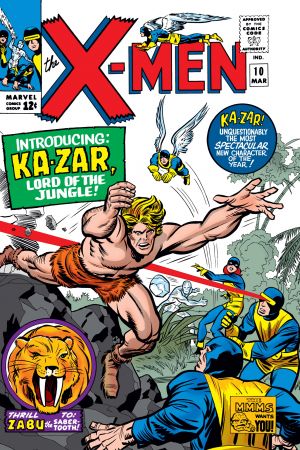 Didja Know… Ka-Zar bumped into his own brother because of Daredevil?

Oops! Spoiler Alert! Lawyer Matt Murdock took a vacation in DAREDEVIL (1964) #12 to get away from his crimson costume and all the craziness that went with it, but wound up playin' with a pirate called the Plunderer—who turned out to be Ka-Zar’s brother!

Lord Plunder’s two bad boys bumped noggin’s in DAREDEVIL (1964) #13 over a family medallion, while DD struggled with the loss of his powers and a bumpy beatdown from the Jungle Lord. The whole mess ended up in England and by the time readers turned the page to DAREDEVIL (1964) #14, Ka-Zar was thrown in the hoosegow for homicide and it was up to the Man Without Fear to plunge the Plunderer and clear Loincloth Louie of a crime he didn’t commit…don’t it always happen that way?

Ka-Zar met up with Mr. Murdock again, as well as a whole galaxy of superstars like the Hulk, Spider-Man, the Man-Thing, and Shanna the She-Devil. Heck, we even heard he hung out with Irving Forbush back in the day...or was it Forbush Man? Who knows? We’ve never seen the two of them together at the same time! 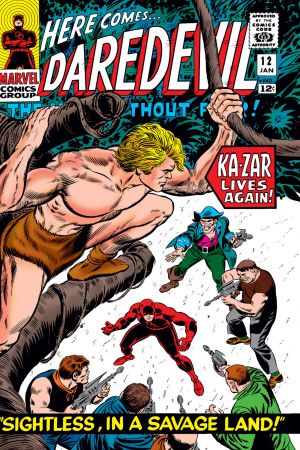 Didja Know… Ka-Zar once shared a book with Doctor Doom?

Bumm-bumm-bummmm! Yep, on the day Marvel decided their Savage Land son deserved his own scintillating strip, they kicked off a whole new mag just for him—and a guy called Doom!

ASTONISHING TALES (1970) #1 was one of those great old split-anthology titles, wherein two cavortin’ characters shared the spotlight and got equal time in the pages in-between. While Doc Doom struggled with the Doomsman in the Latverian limelight, Ka-Zar kicked off his own adventures with a fracas with Kraven the Hunter, then the Petrified Man, Lizard People, and a sun-god known as Garokk.

Here’s one last Didja Know before we’re outta here, hero! Didja know that Barbara “Bobbi” Morse, who later became Mockingbird, made her dazzling debut with Ka-Zar in ASTONISHING TALES (1970) #6? What’s that we always say? Look it up! You’ll be glad ya did!

In this article: Ka-Zar (Kevin Plunder)

'Ka-Zar: Lord of the Savage Land'! 'Defenders'! 'Savage Avengers'! And so much more!