Question for all you dashing Didja Know Diehards: Who’s the sinister siren of the spaceways? Who’s the terror titaness of all time? Who’s the cyborg cut-up both crafty and cruel? Okay, okay—that’s three questions! But the answer’s the same to all of ‘em, kids! Nasty no-good Nebula!

Zippin’ and zappin’ your way in her first-ever series all her own, appropriately tagged as NEBULA, natch, the Space-Pirate Supreme’s not takin’ any guff from Gamora or Thanos or the Guardians of the Galaxy! In fact, she’s out to rise to the top, and this new book’s gonna illustrate why she’s an important icon in the Marvel firmament!

But first, a few fun facts—didja think we forgot?

Well, we sure hope she wasn’t born like that—her poor momma! But anyway, Nebula actually hit the scene as a blue-skinned space-scoundrel in AVENGERS (1963) #257 and quickly quelled any dissent among the peanut gallery that she might just be a posturing poseur. Nuh-uh! Not Nebula!

First, she set out to hijack none other than Thanos’ old ship Sanctuary II. Why? To conquer those squirrelly shape-shiftin’ Skrulls, that’s why! See, the Skrulls were down-and-out at the time, and Nebula figured she’d hit ‘em while they were low and outside—but she didn’t factor in such fine points like, oh, say…Captain Marvel. The Avengers. And that bouncing baby boy we called the Beyonder!

Later, after that defining defeat and a few others equally depressing, in SILVER SURFER (1987) #72 Nebula fell into the horrific hands of a dastardly criminal doctor with the morbid moniker of Mandibus and woke up one morning after surgery as a clinkin’, clankin’ cyborg. The rest, as all the great pundits pronounce, is hysterical history.

Now, if nothing else notes Nebula as a Big-Shot and a Frightening Force throughout the galaxies, being one of the very few wearers and users of the insidious Infinity Gauntlet’s gotta count as her ticket into all the best parties, right?

Remember a couple paragraphs ago we told you she suffered a few slings and arrows following her first furious fight? Well, the bottom of the barrel appeared before her wandering eyes when, after proclaiming herself Thanos’ granddaughter, the Mad Titan hisself caught up with her and, how should we say this... He threw a barbeque and didn’t bother with briquettes. 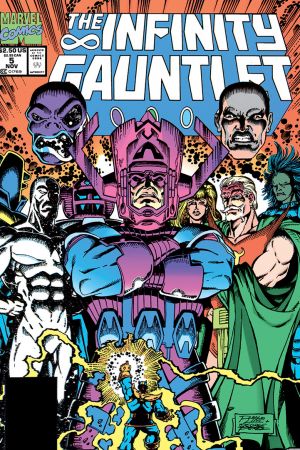 So, round about INFINITY GAUNTLET (1991) #5, a charcoaled Nebula witnessed a Gauntlet-groovin’ Thanos elevate his mind into a, well, forgive us, nebulous state—leaving his body comatose and cold. Nebula stepped in and grabbed said Gauntlet and used it on herself. Wouldn’t you? Hale and hearty once more, she set about trying to, oh, conquer everything, but her inexperience with Infinity translated into her downfall thanks to Adam Warlock and others. Oh, well—can’t win ‘em all! Points for the attempt!

Didja Know… Nebula once managed a mash-up with Kang the Conqueror?

Whew, this one! We’ve got some ‘splainin’ t’do, Marvelites! Because this one stands as a significant sally in the overall saga of Nebula…kind of.

In AVENGERS (1963) #291, a blue person invaded the dreams of one Doctor Druid, who just happened to be allied with the Avengers at the time. In AVENGERS (1963) #294, she revealed herself to be Kang-Nebula, featuring all the finest features of both popular personas, but with all the bad aspects, too. It kicked off a clever campaign of hers to manipulate Druid and his fellow fighters into freeing her from the timestream into which she'd been tossed. 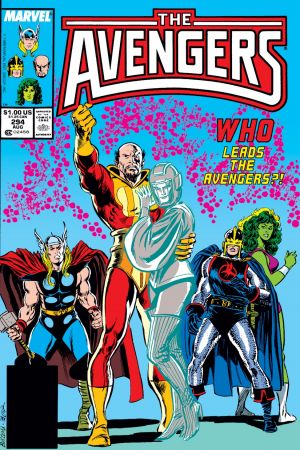 Anyway, Kang-Nebula later turned her tresses toward Johnny Storm in FANTASTIC FOUR (1961) #337 to attempt nearly the same atrocities, but as we all know, Good will always triumph over Evil, yeah? And besides, a bit later Kang-Nebula was righteously revealed to really be…ah, ya know, that’d be too telling. You should look that one up yourselves. It’s a doozy of a Didja Know!

Peruse these eye-poppin' publications with Marvel Unlimited right now! Then visit your local comic shop to pick up NEBULA #1 on February 12!

In this article: Nebula