Everything That's Happened in 'Marauders' So Far

Sail the high seas with the X-team, and pre-order 'Marauders' #11 today!

Warning! This article contains spoilers for MARAUDERS (2019) #1-10, so read on at your own risk, True Believers!

Years ago, during the MUTANT MASSACRE, the X-Men and the Morlocks were attacked by Mister Sinister’s Marauders. Kate—then Kitty—Pryde was among the heroes who almost died in that encounter. But in the Dawn of X, Kate is redefining herself and claiming the Marauders name for her ship and her crew. Gerry Duggan, artists Matteo Lolli and Stefano Caselli, and the rest of the creative team have made MARAUDERS into one of the most buzz-worthy X-Men titles during a historic time for the mighty mutants.

On Wednesday, August 12, the series will return with MARAUDERS #11. And there’s something rotten in the state of Krakoa...

The Marauders team has been rocked by the murder of one of their own. While HOUSE OF X seemingly made the mutants masters of life and death, they’ve found out the hard way that their new power is not absolute. The queen is dead. And how long will it be before the Marauders learn who killed their loved one?

Before the crew mourns their loss and sets out to avenge her, Marvel.com is offering a quick primer on everything that’s happened so far in MARAUDERS. Hold fast, mateys. Treachery and intrigue await.

The Hellfire Club is no more. In its place, Emma Frost and Sebastian Shaw are the White Queen and Black King of the Hellfire Trading Company. Emma handles the legitimate business of transporting Krakoa’s super pharmaceutical drugs around the world while Shaw tackles the black market. Part of the deal that brought Emma and Shaw into the fold gave them three seats on Krakoa’s Quiet Council. Naturally, Emma wasted little time in choosing Kate Pryde to rule alongside her...after Storm and the Stepford Cuckoos turned her down. 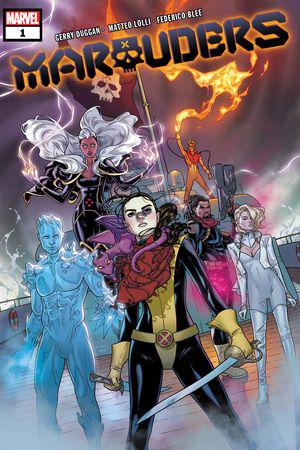 Rise of the Red Queen

MARAUDERS #1 quickly revealed that Kate was rejected by Krakoa for reasons that have yet to be revealed; her attempt to use a Krakoan teleportation portal left her with a broken nose and hurt feelings. But Kate found a place for herself in the new order by leading a crew that includes Storm, Bishop, Iceman, and the original Pyro. On their newly christened ship, the Marauder, Kate and her crew rescue mutants around the world from hostile powers.

Within the pages of issue #2, Kate formally accepted Emma’s offer to become the Red Queen.

Shinobi Shaw and his father, Sebastian, have been at each other's' throats since Shinobi’s introduction in X-FACTOR (1986) #67. However, Shinobi committed suicide during a bleak period for mutantkind in UNCANNY X-MEN (2018) #20. The elder Shaw was horrified by his son’s fate, and he arranged Shinobi’s resurrection on Krakoa. 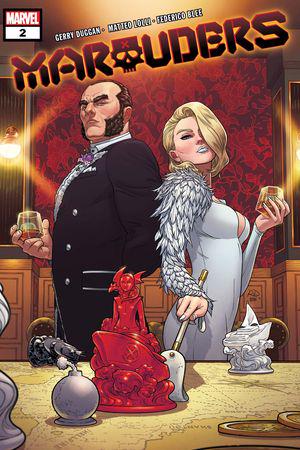 Shaw also lied to Shinobi about his death, and insinuated that he was murdered by Emma and Kate. Additionally, Shaw planned to install Shinobi as the Red King before Emma outmaneuvered him. Now, father and son have put aside their differences, and Shinobi agreed to become the Black Bishop of the Hellfire Trading Company. He was even given command of his own ship: The Upstart.

There was a time when Kade Kilgore, Wilhelmina Kensington, Manuel Enduque, and Maximilian Frankenstein called themselves the Hellfire Club. These evil children made life hell for the team in WOLVERINE AND THE X-MEN (2011). Now, Kade and his young conspirators have rebranded themselves as the Homines Verendi and recruited several anti-mutant villains. Among the additions is Chen Zhao, a wealthy woman who was humiliated in issue #4 when Kate and Bishop exposed her husband as a member of the Mutant worshiping cult, Order of X.

Within the pages of mag #5, Verendi sprang a trap for the Marauders and unleashed X-Cutioner and Hate-Monger on them. In secret, they also injected Pyro with a miniature submarine piloted by Yellowjacket (AKA Darren Cross). This was part of Verendi’s long game to gain access to Krakoa’s secrets with their literal man on the inside. 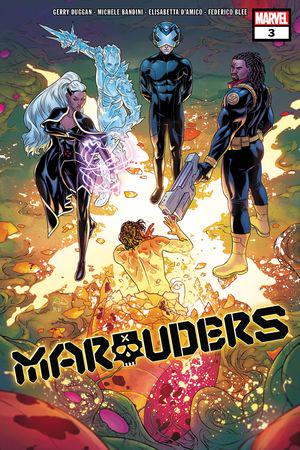 Down With the Ship

Shaw engineered the entire situation, and he waited until Kate was alone before unveiling the real trap. Kate’s powers were neutralized in issue #6, and Shaw gloated about his plans to steal her council seat and eventually Emma’s seat as well. Shaw also took out Kate’s dragon, Lockheed, and left him at the bottom of the sea.

As for Kate herself, she vowed vengeance as she drowned during the sinking of the ship. Thus far, Shaw’s crime has been blamed on Verendi. But he’s made the potentially fatal flaw of leaving one of the witnesses alive...

Unbeknownst to Shaw, Lockheed survived his watery ordeal. In MARAUDERS #7, Lockheed was found by a fisherman’s daughter off the shore of Madripoor. Over her father’s objections, the girl has cared for Lockheed during his convalescence.

Meanwhile, Emma recruited Callisto to be her new White Knight. As for the other Morlocks, many of the former sewer dwellers have made themselves at home in Rio Verde, Arizona. They’ve even found sanctuary and paradise in a country club controlled by Krakoa’s leaders. 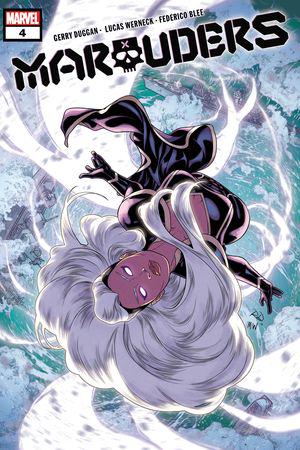 A Gift of Hope

The Marauders didn’t learn about Kate’s fate until issue #8 when Bishop discovered her body on a Verendi ship. Iceman was so angered by Kate’s fate that he used his cold powers to brutalize the crew. Storm also lashed out at Emma, whom she blamed for Kate’s death.

Remarkably, Emma responded with kindness and hope. The two women even embraced over their shared affection for Kate. Meanwhile, the Shaws recruited the Fenris twins as their new Black Knights.

The Spy Among Us

Yellowjacket’s micro-sub may have escaped initial detection, but there’s no fooling a telepath! Emma discovered Yellowjacket’s presence inside Pyro’s body in ish #9, and she had Magneto help her remove the sub without killing Pyro. She even allowed Pyro to be a part of her intense warning for the Verendi kids.

However, the Five mutants who make Krakoa’s resurrections possible failed to bring Kate back to life. It’s the first time that they have been unable to resurrect one of their loved ones. No one knows why. The lone piece of good news is that Lockheed fully recovered, and left his young guardian behind. If Lockheed identifies Shaw as Kate’s murderer, then it’s all over for the Black King. 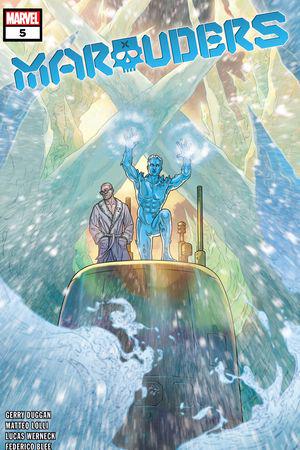 The Marauders At War

In the wake of Kate’s death, Emma and the Marauders brought Forge into the fold in issue #10. Together, they dealt with the lingering threat of Russian-made armor and weapons that could temporarily negate mutant powers. Forge even realized that one of his old colleagues, Daniels, must have used his photographic memory to recreate Forge’s work.

It turns out that Daniels was on Forge’s side all along, as he dramatically shortened the length of time that the mutant inhibitors worked. But after his rescue, Daniels was informed that he couldn’t go home again. Instead, his memories were wiped and he was given a new name: Dan Molina. But that doesn’t mean that Forge abandoned his friend. Dan is now living the good life in Rio Verde, and he even befriended Masque during a round of golf!

Pre-order MARAUDERS #11 with your local comic shop today, then pick it up on August 12! Be sure to ask your local comic shop about their current business policies to observe social distancing or other services they may offer, including holding or creating pull lists, curbside pick-ups, special deliveries, and other options to accommodate.

Find and support your local comic book shop at ComicShopLocator.com or by visiting Marvel.com/LoveComicShops. For digital comics, all purchases in the Marvel Comics app can be read on iPhone®, iPad® and select Android™ devices! Our smart-paneling feature provides an intuitive reader experience, ideal for all types of mobile device and tablet users! Download the app on iOS and Android now!

And for Marvel’s most up-to-date release schedule for your favorite comics, visit Marvel.com/NewComics!