T’Challa goes to Hell and back, teams with the Avengers, fights for his country, and more!

His mind troubled by the Tomorrow Fund and the coup in Wakanda, T’Challa fell under the gaze of the demon Mephisto in BLACK PANTHER #3, which led to a full-blown confrontation between the two in BLACK PANTHER #4. Subsequently, Mephisto sent the hero and U.S. representative Everett Ross to Hell in BLACK PANTHER #5 to cause them even more trouble and turmoil.

The Black Panther stood with Earth’s Mightiest Heroes in AVENGERS #19 during an assault on the team by Alkhema, a female version of the robotic Ultron. Afterward, T’Challa and his teammates learned of Ultron’s destruction of the small European country Slorenia in AVENGERS #20, and made plans to lead a multi-nation invasion to stop him. 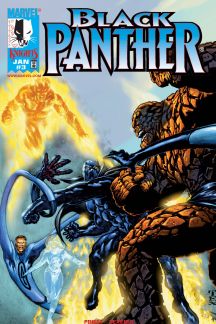 Once in Slorenia, Captain America instructed the Panther and Firestar to hunt down Ultron’s location in AVENGERS #21, and when they accomplished their task, the Avengers seemingly destroyed their foe…until a multitude of Ultrons arrived to battle them. New team member Justice’s timely arrival with Antarctic Vibranium helped turn the tide in AVENGERS #22.

BLACK PANTHER #13 revealed T’Challa’s quest for Monica Lynne, while the mystery of the woman known as Queen Divine Justice expanded in the background.