Gail Simone Lines up Her Domino

The writer talks about what to expect from the mercenary!

Domino is getting her own series—and luck had nothin’ to do with it!

On April 11, writer Gail Simone and artist David Baldeón are placing Neena Thurman in the sights of the villain known as Topaz. Domino’s mutant ability might be able to manipulate probability, but it’s gonna take more than that to get her out of a few tight corners.

Marvel.com spoke with Simone about her love of mercenaries and the allies Neena will be taking with her on this ride.

Marvel.com: How does it feel to be giving Domino her own series?

Gail Simone: Oh, it feels great. She’s always been such a fun, energetic character. It was a very impulsive move on my part to take the book, the editor asked out of the blue, we’d never spoken before, and I started thinking, and said yes the next day, which I never do! Within a couple days, we had the great David Baldeón on board, it just all feels meant to be. A friend at Marvel said that “Domino was waiting for you,” which is wildly flattering, when it feels the other way around; I was waiting for her.

Marvel.com: What was the first thing you knew you wanted to explore with this character?

Gail Simone: Karma, man, karma. Seriously, no one beats the house odds forever. She’s being playing the world on Cheat Mode—that cannot come at no cost. Aside from that, I love the setting she’s in. I’ve been away from Marvel a long time, and I haven’t gotten to attach much to the overall mutant storyline, so we made sure that DOMINO has mercenaries and mutants. Because I’ve been away for a while, I wanted to cut loose, you know?

Marvel.com: Can you describe some of the dangers Neena will be facing in this comic?

Gail Simone: There are two right away. One is mysterious—an old man with a connection to Neena that she didn’t know about. The other is the deadly female known as Topaz, who has the power and viciousness to bring down Domino and everyone she cares about. And has good reason to hate her guts. 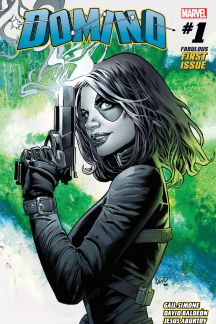 Marvel.com: What’s the most fun part about writing for a mutant who can manipulate probability?

Gail Simone: It’s fun trying to have those moments happen without feeling like we’re cheating. If a plane lands on the bad guy when he’s about to shoot her, that’s really cheating the audience. We have to do better than that, and I am enjoying that challenge. Aside from that, it’s fun writing her with her best friends, Outlaw and Diamondback, in their little merc trio. I have rarely had so much fun writing three characters together.

Marvel.com: You’ve said that you love exploring what it means to be a mercenary and a mutant in this universe. Can you expound on that a little bit?

Gail Simone: Oh, yeah! Well, it’s no secret that I love writing mercs. I love writing the heroes who aren’t quite fully heroic and the bad guys who aren’t quite fully villainous. I love the idea of these beings, these extraordinary people, doing this grunt work for a paycheck. That is a position I think a lot of people relate to. As for mercs, you know, I think the whole mutant story is one of the richest subgroups in comics; there’s nothing quite like it. Characters from Cypher all the way up to Dark Phoenix—there’s a lot to explore.

Get ready to explore DOMINO #1, by Gail Simone and David Baldeón, on April 11!