Get a Refresher on the Vulture's Backstory

With Adrian Toomes on the hunt in 'Amazing Spider-Man' #20.HU, we look back at his debut!

Given a zoo's worth of villains, Spider-Man finds himself constantly fighting baddies with an affinity for one creature or another. In this week's AMAZING SPIDER-MAN #20.HU by Nick Spencer and Cory Smith, the Vulture swoops in to remind not just Spidey, but also the readers, of his importance in the wall-crawler's life...

You might not think that an old guy in feathers is the most formidable of foes, but you can't argue with Adrian Toomes' longevity! The character debuted way back in 1963's AMAZING SPIDER-MAN #2 by Stan Lee and Steve Ditko. Looking back at the hero's history, it's interesting to note that Vulture was only the second Super Villain he faced off against. (Remember, he went up against a powerless thief in his debut and then Chameleon in the first issue.)

Lee and Ditko gave Toomes quite an introduction between the cover and opening splash page, which both precariously place Spidey high above the Big Apple fighting this green clad foe who can clearly fly! The action then moved back in time to show that a new avian villain had been terrorizing New York City for days, swooping down from the sky and stealing whatever he pleased!

As talk of the criminal spread throughout the city, a fortuitous set of parallel circumstances lead to a life-changing moment for Peter Parker. J. Jonah Jameson demanded his editors find good pictures of the Vulture. Meanwhile, in a high school science lab, young Parker overheard his fellow students talking about how they wanted to see the villain clearly... An idea was then born: Peter Parker would take photos while fighting villains as Spider-Man and sell them to Jameson!

Armed with his Uncle Ben's old miniature camera, Spidey set out to capture the Vulture in more than one way! After reading about the Jewelry Exchange's plan to move a million dollars' worth of diamonds, Vulture devised a plan and even went so far as to taunt Jameson, the radio station, and the police with his ability to make off with them, even with everyone looking for him to do so!

Spider-Man managed to find his prey and get a few shots, but he was too absorbed with the camera. The hunter became the hunted as Toomes attacked and managed to drop the hero in a nearby water tower. Though out of web fluid and unable to stick to the slick walls, he used his smarts and strength to get out. Back in his room, he built a now-familiar belt to hold additional web cartridges and the camera! 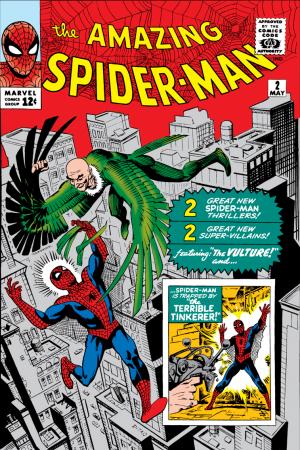 The next day, Vulture managed to surprise everyone by popping out of the sewers and grab the diamonds. Eventually returning to the skies, Spider-Man gave chase. During their mid-air battle, the web-slinger attached a device of his own creation to Vulture that sent him spiraling down to the streets below. Parker theorized that Toomes harnessed magnetic power to fly and thus created an anti-magnetic inverter to ground his foe.

Better yet, this second run-in with the villain led to even more photos that Peter sold to Jameson which not only helped pay the bills, but also helped establish one of the more iconic aspects of his character!

The Most Shocking Moments From ‘Sinister War’

Read this epic Spider-Man event in full on Marvel Unlimited!

Doctor Octopus Is Back