Hellfire Gala Week Two: The Fireworks Are About To Begin

Spoiler alert! Read through the fallout of this week's new issues of 'Excalibur' and 'X-Men'!

Warning! This article contains spoilers for today's new issues of EXCALIBUR and X-MEN, so read on at your own risk, True Believers!

There have been a lot of parties on Krakoa since the mutant nation was founded in HOUSE OF X, but there’s never been anything like the Hellfire Gala before. By the time this party is over, the Marvel Universe is going to be a very different place. And that's not an exaggeration. Big developments are on the horizon. But that doesn’t mean that this week was uneventful. Far from it, in fact.

Writer Tini Howard and artist Marcus To kicked off the second week of the Hellfire Gala in EXCALIBUR #21. Every member of the team was outfitted in the finest mutant fashions, even Rictor, who constantly reminded everyone that he hates parties. Privately, Rictor was upset about the absence of his unlikely mentor, Apocalypse. En Sabah Nur took Rictor under his wing in EXCALIBUR #3, and they actually came to care for each other. Rictor hasn’t seen Apocalypse since X OF SWORDS, but he was clearly on Rictor’s mind today.

Another blast from the past literally leaped back into Rictor’s life: his ex-boyfriend, Shatterstar. The duo first felt a connection all the way back in X-FORCE (1991), but they didn’t officially become a couple until X-FACTOR (2005) #45. Shatterstar was only recently rescued from the Mojoverse in X-FACTOR #9, and that may be why he was so eager to embrace Rictor again. However, Rictor wasn’t having it.

Betsy Braddock and Pete Wisdom were a lot happier to see each other, even though they're still pretending that they aren’t very attracted to each other. During their shared dance, Betsy used her telepathy to connect with Pete, but it definitely wasn’t a love connection. Instead, he allowed her to see his thoughts about what’s happened in the United Kingdom since she’s been gone...and the news isn’t good. Coven Akkaba used her absence as an opportunity to spread poisonous lies about Betsy and her loyalties to her home country. Because she disappeared so abruptly, Coven Akkaba has been named protectors of the realm, and their leader, Reuben Brousseaum, is the UK's new ambassador to the United Nations.

Pete’s worries proved to be well-founded when Brousseaum summarily severed the United Kingdom’s diplomatic ties to Krakoa. They’ve also rejected Krakoa’s life-saving miracle drugs, and they want all Krakoan gates removed from their country. Brousseaum was seen scheming with his like-minded allies in last week’s MARAUDERS #21, and he took the opportunity to strike at the heart of Krakoa’s business operation. 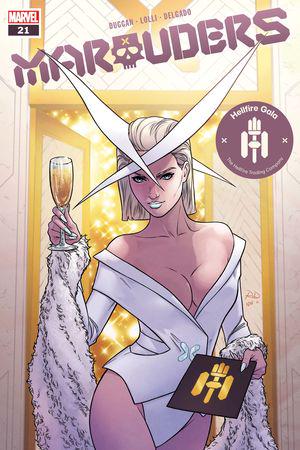 Rather foolishly, Pete accompanied Coven Akkaba on the trip back to their London lair. That turned out to be a fatal mistake, as Brousseaum and his coven overpowered and murdered Pete in a magical ritual that awakened Morgan Le Fay from her captivity. Morgan was the first enemy of the current Excalibur team, and now she’s free again. She may not have all of her mental faculties at the moment, but she’s still very dangerous. This will undoubtedly cause a lot of problems in the months ahead.

In lighter moments from the party, Betsy shared a dance with Rachel Summers as friends. Meanwhile, former Excalibur teammates Brian and Meggan Braddock caught up with Nightcrawler. And if Nightcrawler’s intuition was correct, Meggan may be expecting her second child with Brian, but she hasn’t told him yet.

Back at Excalibur’s lighthouse, Rictor took drastic action to ensure that Clan Akkaba couldn’t claim their home. With the help and support of his Druid followers, Rictor created a new island around the lighthouse and annexed it from the UK. Much to Rictor’s surprise, Shatterstar followed him back through the gate and the two exes shared a quiet moment together to wrap up their night.

However, the Hellfire Gala was far from over then. X-MEN #21 was even more momentous, thanks to Jonathan Hickman and the powerhouse artistic lineup of Nick Dragotta, Russell Dauterman, Lucas Werneck, and Sara Pichelli. Together, they wrapped up one era in the Reign of X and set the stage for X-MEN (2021) #1 later this summer.

To kick things off, Magneto and Professor Charles Xavier made another attempt to recruit Namor by offering him a place on Krakoa’s Quiet Council. It’s not the first time they’ve made this offer, and both men have extensive history with Namor that goes all the way back to UNCANNY X-MEN (1963) #6, when Namor briefly joined the Brotherhood of Evil Mutants. Namor has actually been a member of the X-Men on two occasions, most significantly when he helped found the island nation of Utopia during DARK REIGN.

Readers of AVENGERS (2018) know that Namor has been extremely aggressive towards the surface world lately. And he’s not exactly eager to throw in his lot with the mutants. Magneto and Xavier were very upfront about their reasons for approaching Namor again. They want powerful alliances to deter their growing roster of new enemies. In turn, Namor tells them that he controls over 70 percent of the planet through his dominion over the oceans, whereas they only control an island.

"Get back to me when you have something more to offer," said Namor.

Later that night, we witnessed the telepathic election of the new X-Men team. Nearly every mutant in the world was in telepathic contact with Jean Grey as they made their case to be on the new team. Doctor Strange was able to perceive some of it, but to the vast majority of the partygoers, it appeared as if the mutants simply spaced out.

Rogue was the first member of the new team to be announced. And it’s actually the first time that she’s been a full-time member since X-MEN (2013). EXCALIBUR #21 had a brief scene in which Rogue’s current team congratulated her. While Rogue is leaving them behind, Gambit and their three cats will maintain a residence in the lighthouse. As for Gambit, he has “plans” of his own.

Sunfire was one of the second generation X-Men from GIANT-SIZE X-MEN (1975) #1, but he’s never stayed with the team for any extended period of time before. Sunfire also has a connection with Rogue, since he asked her to absorb his psyche and powers in ROGUE (2004) #10-11 when he was seemingly about to die. They were also teammates on the Avengers Unity Squad and are soon to be teammates again.

Wolverine (Laura Kinney) was the next selection. She has also been an X-Man before, most notably in X-MEN: RED (2018). Laura’s election signifies that she’s found a place outside of Logan’s shadow, even though she still shares the Wolverine codename with her biological father. Laura is her own woman, and she has been for a while now.

Synch has never been a member of the X-Men before...because he was dead for years. His return from the great beyond was only possible because of Krakoa and the Five. He also has a complex history with Laura, since they recently emerged from hundreds of years in the Vault with the Children of the Vault. Over that long period of time, they fell in love with each other. Tragically, only Synch has all of his memories of their relationship intact. Yet he doesn’t seem inclined to give up on their connection.

The final member of the new team is Polaris, one of the last of Xavier’s first class of students. Magneto’s only living daughter has had some serious personal trauma over the years. But she’s also been a perennial member of X-Factor, and Polaris seems far more comfortable in her own skin since she moved to Krakoa.

Cyclops and Jean Grey will co-lead the new team. But don’t be too shocked if Xavier takes a more active role with the heroes of Krakoa as well.

In a bizarre aside, Sinister released a new installment of his rumor column...which is presumably only read by other clones of himself. In a blind item, Sinister implied that Mystique was behind the shipment of Shi’ar logic crystals that mystified Emma Frost in MARAUDERS #21. Mystique’s shape-shifting abilities could have easily fooled the Shi’ar into believing that Emma placed the order. But that doesn’t tell us why Mystique wants the crystals.

Sinister also briefly teased Apocalypse’s new life with his family, before dropping ominous hints about an Inferno to come.

Fans of great Super Hero movies will probably recognize the familiar face who chatted up Cyclops at the bar, and that gave Scott Summers the perfect excuse to encapsulate his long history with the X-Men.

Finally, the telepathic fireworks began with a presentation from Emma Frost. This is the big one. You wanted fireworks? You're going to get them. The funny thing is that sharp-eyed viewers may be able to guess what’s going to happen next. The clues are already in place, especially for readers who plan to revisit these issues in the next seven days.

The Dawn of X began with these words: “Humans of the planet Earth. While you slept, the world changed.” This time, the change is coming while humanity’s eyes are wide open. And it may be a change that’s truly on an intergalactic scale.

Read EXCALIBUR #21 and X-MEN #21 for yourself at your local comic shop today!