Thor gets caught in a war between Ego and the Devourer of Worlds!

Ever since the dawn of comic books, readers have spent hours, days even, discussing what it would be like if their favorite characters met and what would happen in the ensuing fight. Fans themselves, Stan Lee and Jack Kirby actually got to make those dreams a reality as they continued building the Marvel Universe throughout the 60s. In THOR #160–161, two incredible powers came into conflict for the first time: The God of Thunder and Galactus.

The issue from 1969 began with Tana Nile landing on Earth in hopes of drawing Thor out and requesting he return to Rigel with her to stop an unnamed, but grave menace, to which he agreed. Meanwhile, in Asgard, Odin interviewed The Recorder as Sif burst into the throne seeking leave to travel alongside her beloved Thor. Odin denied her, but did not stop the Rigellian robot from returning home.

Back on Nile’s ship, Thor’s journey came under siege as a lone but incredibly powerful Taurian crashed through the hull, demanding the crew cede control of the vessel. Upon losing the fight, the alien asked for mercy and explained that he’d lost his mind, just for a moment, because of the destruction Galactus wrought on his planet. Between that and seeing the results of the Devourer of Worlds’ most recent meal outside the ship, The Odinson vowed to punish The Planet Eater. 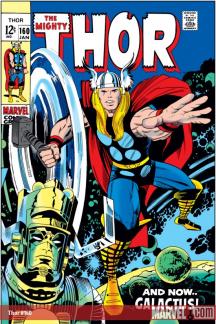 While Recorder and Thor reunited on Rigel and left to find Galactus, the cosmic entity had come upon an unforeseen enemy in the form of Ego, the Living Planet! Their battle of might and mayhem proved strong enough to destroy the craft carrying Thor and his ally, leaving them seemingly stranded until the Wanderers swooped in to save the day. This group of survivors from the first planet Galactus consumed made it their mission to see their tormentor sated forever, one way or another.

As our heroes healed from the frigid vacuum of space on the Wanderers’ ship, Kirby treated us to a must-see confrontation between Ego and Galactus. In addition to the huge, bold traditional art “The King” created with apparent ease, we also got to see another of those amazing collages he dreamed up. Wishing to end the madness, Thor thrust mighty Mjolnir into the fray. Flying true, the mystic mallet found its target, smashing into Galactus and reminding the gargantuan what physical pain felt like. The Thunder God then took the fight directly to his foe, walloping him in the head with his trusted weapon.

Though The Recorder and the Wanderers all assumed that they’d been soundly defeated, Thor mounted Mjolnir to a device built on Ego to turn it into a kind of cosmic cannon. Calling upon the strength and power of Odin, his prodigal unleashed enough power to severely damage Galactus, sending him away to heal and continue his never-ending mission of sating his hunger. With their shared enemy defeated, Ego and the Wanderers became allies for a time as the living planet created a lush living place for the group on his surface and offered it as their home and sanctuary.

In this article: Ego

Get caught up on the story of Brunnhilde and Annabelle Riggs ahead of 'Asgardians of the Galaxy' #10!

Look back at Ego’s showdowns with the likes of Thor, the Fantastic Four, and more!