Check out an excerpt of the novel by Brandon T. Snider 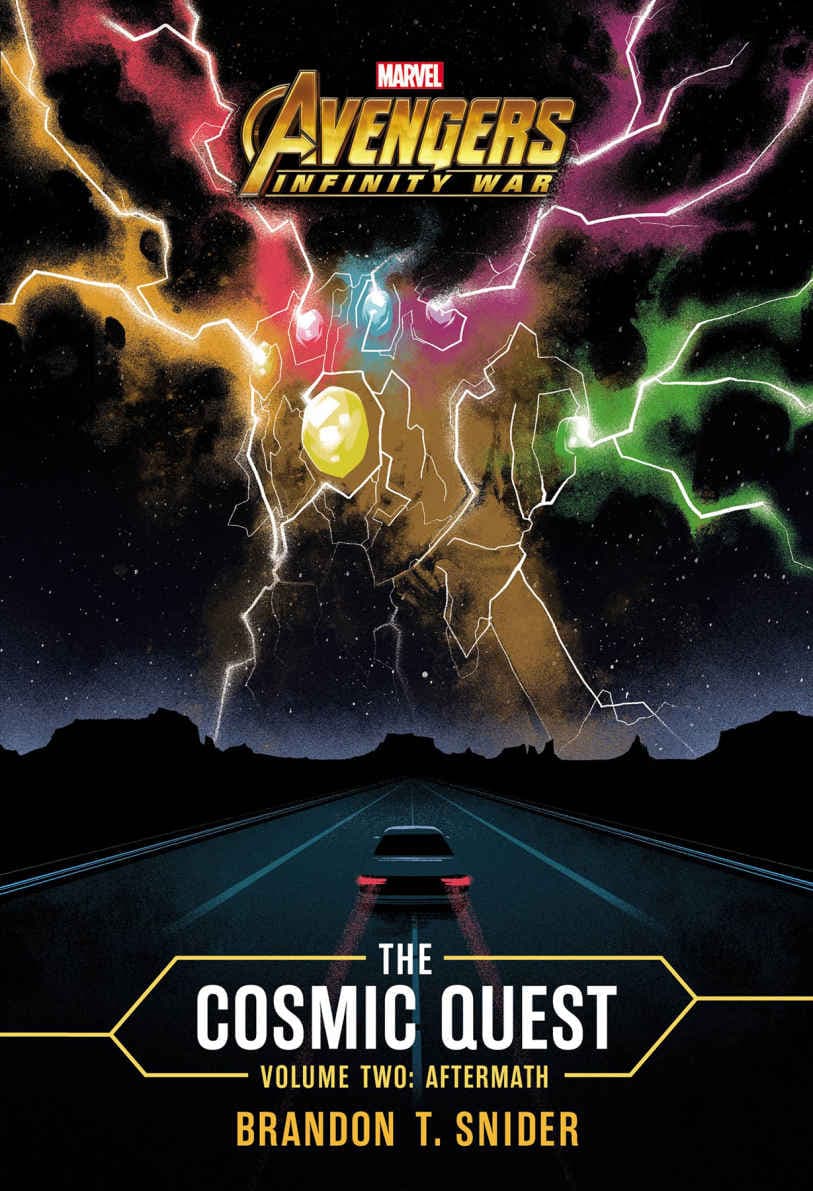 In Vol. 1, readers get an inside look into family relations as the Collector and the Grandmaster —two characters with great screen presence in the Marvel Cinematic Universe—come together after both having fallen from grace. Read an interview on the sibling rivalry with author Brandon T. Snider here.

In this volume, this book features the stories of three of the six Stones as Dr. Erik Selvig and his associate Darcy Lewis try to get to the bottom of what's been going on in the cosmos in relation to "Avengers: Infinity War." Their research leads them on a pursuit of knowledge to discover the links between their own pasts and the cause for the cosmic interference--the Infinity Stones--responsible for decimating half of humanity. Little do they know that a new foe who threatens to destroy them all is looming ...

Darcy strolled over to the rusty metal railing that overlooked the motel grounds. The place was teeming with curious characters. Poolside, a woman clipped her toenails and flicked them into the water while her husband lathered himself in cheap tanning oil. A mangy dog, possibly blind, wandered, while bumping into things and barking angrily at nothing in particular. Two twin boys, covered in dirt, played peekaboo in a mud puddle near the edge of the parking lot. Their mother and father argued over who’d clean them up. The motel’s owner, Ken, did one-armed push-ups in the middle of the courtyard, looking around in between reps to see if anyone was watching. Darcy noticed a boy lingering near her in the open-air hallway, inching closer and closer. He seemed to be around twelve years old, dressed in a gray polo shirt and jeans, with a head full of tight black cornrows. She saw that he was smiling, but she couldn’t figure out why. “Can I help you with something?” she asked.

“Doctor Selvig is probably sleeping,” he said. “He stays up all night, sleeps all day. It’s his routine. He thinks he’s not predictable, but he totally is. I know his patterns.”

Darcy was thrown for a loop. She remained silent, hoping the kid would take the hint and walk away. No such luck.

“There are all these unexplained phenomena on our planet. Stuff we don’t understand and will never understand. But there has to be a scientific explanation for everything. That’s just how the universe works,” he explained. “You agree, right?”

Darcy shook Felix’s hand. “I’m his associate, not his assistant, and this is a no-tween zone. That means no tweens within this zone,” she said, swirling her fingers in a circle.

“Has he told you his theory yet?” Felix asked. “Doctor Selvig knows the truth behind what happened. Or at least he thinks he does. I don’t know. He won’t tell me. I hear him talking to himself about it at night, but that doesn’t count.”

“You seem nice, kid,” Darcy said. “But I’m dealing with a situation here.”

“My parents are immigrants. From Ethiopia,” Felix said awkwardly. “They moved here about twenty years ago, and I was born about eight years after that. They were scientists like Doctor Selvig. Biologists, actually.”

“Cool,” Darcy said. Her patience was wearing thin. She looked in the other direction, hoping Felix would take the hint and leave her be.

“They’re, um, gone,” Felix said softly. “Because of, you know...I’m on my own now.” He shifted his eyes and shuffled his feet. “The therapist at my old school said that since I’m a prodigy, it’s hard for me to communicate because I’m so smart. I have trouble relating to people because my mind goes, like, a million miles per hour. That’s why Doctor Selvig and I get along so well, I guess.”

“Yeah.” Felix looked out across the motel courtyard. Tears welled in his eyes. He wiped them away before they fell. “Sorry if it’s weird that I brought them up like that. I can’t help it. I miss ’em. The more I tell people about who they were and where they came from, the more it keeps their spirits alive. You know what I mean? Besides, the first law of thermodynamics, also known as the law of conservation of energy, states that energy can neither be created nor destroyed; only transferred or changed from one form to another. That means my parents, and everyone else we lost that day, are out there somewhere, just in a different form.”

Felix leaned closer to Darcy. “You wanna hear something freaky?” he asked. “Some of the relatives of the people who vanished at the Seafarer show up every single day just to see if their folks are back. The manager always calls the cops on them. He’s a jerk like that.” Felix stared at Darcy, unblinking. “You’re way more basic-looking than I thought you’d be.”

“No shade. Most women your age are pretty basic overall. At least in my experience.”

“In. Your. Experience?” she fumed.

A panic-stricken Erik Selvig swung open the door to his motel room. “Darcy!” he shouted. “What are you doing here?!” He craned his head down the hallway in both directions, checking to make sure she hadn’t been followed. Selvig’s gray hair was a wild mess. There was a fresh trail of drool that went from the corner of his mouth all the way down to his neck. He’d wrapped himself in bedding, covering his body in a cocoon-like toga.

“Don’t you look together?” Darcy said, her eyes wide with sarcasm. “You called me last night, Erik. At three am. You were going on about something I didn’t understand, then the phone cut out. I tried calling you back, but it went straight to voice mail. I got in my car and drove here because I’m faithful to the cause. I’m also worried.”

Selvig stared at her blankly.

“Do you remember any of this?”

“Felix,” Selvig said with a kind nod. “My associate and I are conducting some very important business at the moment. Run along now.”

Down in the courtyard, Ken, the manager, had just finished his exercise routine and was looking for a confrontation. “Felix!” he yelled. “Get down here and scrub these toilets! You wanna keep stayin’ here, you gotta work. I ain’t gon’ tell you again.”

Felix bolted. “Nice meeting you, Darcy. Talk to you later, Doctor Selvig!” he shouted, racing down the stairs to complete his task.

“Ken is a tyrant,” Selvig groused. “Always in my business. I caught him cleaning my room the other day without my permission. And the rent? Highway robbery.”

“Oh. He’s a very bright young man who has taken a shine to me,” Selvig said. “He’s in need of mentorship. Something I’m not in a place to provide at the moment.”

“Clearly,” Darcy said. Her clothes were damp with sweat. “Are you going to invite me inside or what? I’m dying out here.”

“Yes! Yes. Yes, come in,” Selvig said, welcoming her into the room. He tossed away his covering to reveal a once-white XXL T-shirt, tattered around the edges and covered in powdered-cheese-crusted fingerprints.

Darcy entered the dark space, tripping gently over a pile of unwashed clothing. As her eyes adjusted, she realized that dirty clothes were just the beginning. “Holy...” She gasped, flipping on the light. Selvig’s motel room was a total disaster. It was littered with trash and half-eaten food items. The smell was rancid, as if a mayonnaise-filled burrito had been stuffed in an old shoe, baked on high for a week, then simmered in liquid body odor. An enormous pile of sour towels sat in the corner of the room like a terry cloth snowman, melting in the heat. Darcy was confused by the trail of candy bar wrappers that went from the bed to the bathroom. The wallpaper had been torn down, replaced with Selvig’s etchings of cubes, suns, wheels, trees, and other childlike formations. A crescent-shaped device had been drawn and crossed out. Sticky notes lined the perimeter of the room, each one filled with formulas and theories. The sight was overwhelming. Darcy didn’t know where to begin. “Have you tried meditation?” she asked. “You should try meditation.”

Selvig spotted the bag of gummy worms in Darcy’s pocket and snatched it away. “Despite my disheveled quarters, I’m actually in a good place. The pieces of a great puzzle are coming together,” he said, ripping open the bag and stuffing a handful of candy into his mouth. “This is where it all started for us, you know. The very first recorded sighting of an Einstein-Rosen bridge was right here in Puente Antiguo. That’s why I came back. This location has significance. It has meaning. Remember when we first met? What a day that turned out to be, eh?”

“Do...you...need...a hug?” Darcy asked tentatively. “I’d give you one, but your clothes are filthy, and you smell like a pet store. Why don’t we clean you up so we can go get some fresh air and a bite to eat, huh?”

Selvig reached under his bed, pulled out a crumpled bag of cheese twists, and poured them into his mouth. “These are very good,” he crunched. “Let’s eat these.”

Darcy was done playing games. “What am I doing here, Erik?”

In this article: Thanos, Infinity Gems

We've got details on the posters' rollout plus a Q&A with artist Truck Torrence!

The Top 10 First Meetings in the Marvel Cinematic Universe

How the Avengers first met each other.