The Most Dangerous Woman finds herself beset by the return of friends she thought long gone.

Gamora Zen Whoberi Ben Titan, a former member of the Infinity Watch and current member of the self-titled Guardians of the Galaxy, contacted this writer on recommendation of a few of her colleagues.

In the course of doing the intake, the client revealed herself to be one of the adopted children of the space tyrant known as Thanos. While I have no direct knowledge of Thanos or what kind of father he is, given his history and the details provided by the client, it seems unlikely Gamora was raised in an environment that was at all helpful or supportive for her.

Instead, as a child, the client was subjected to extensive training with the goal of turning her into a warrior/assassin type in the service of her adoptive father. Despite the distance with which he treated her and the not entirely occasional cruelties, she grew to be a devoted lieutenant to him, a connection that was only increased after she was attacked and nearly killed while on a mission and Thanos rescued her and, using non-organic materials, saved her life and mobility.

It took multiple betrayals, abandonments, and one complete erasure from the universe for the client to finally break ties with the so-called “mad” Titan. Initially she almost immediately sought love and comfort from another distant figure — Adam Warlock — but eventually left him as well, of her own accord, when she felt that her love was not being reciprocated. They would later reunite during a time he was emotionally available and Gamora, seemingly, broke the cycle of seeking validation from people who are, in some way, unable to give her the affection and support she truly needs. 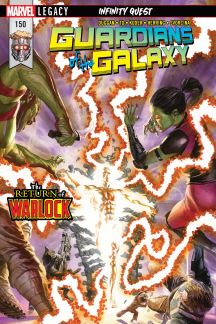 Since then, she has done much to distance herself morally from Thanos, but seems to continue to gravitate back to him again and again, if just for the purposes of foiling his various plots. Nonetheless, both according to her and from official reports, it appears that she doesn’t experience any kind of ambivalence in opposing him at this point.

Where she might experience ambivalence, however, and what is motivating her seeking therapy, is the seeming resurrection or return of two people she cared very deeply for – the Nova Corps member known as Richard Rider and the aforementioned Adam Warlock. While she denies any active romantic feelings to them, she still cares deeply for them and mourned their deaths. To have them both return to life — or being revealed to have never died in the first place, possibly — so close together has been incredibly wonderful and terribly confusing. To encounter anyone who you believed dead and had come to terms with that death, is a significantly disorganizing event. Add in the knowledge that she is supposed to be happy — therefore sparking guilt that she is not purely happy — has led to even more complex feelings and an individual very confounded by her own emotions. Given the straightforward zeal with which she has pursued goals in her life, this kind of confusion—hard for anyone—is even more difficult for her to process.

Unfortunately, due to her being in space and my office still being on Earth, long-term therapy with this writer does not seem like the best idea at this time. Video conferencing is an option, but after discussion we agreed an in-person presence would be a better arrangement for her. Therefore, she will meet with Doctors Gerry Duggan and Marcos To on December 6, 20, and January 3 for evaluation. The results of their findings will be found in files GUARDIANS OF THE GALAXY #148–150.

Psy D. Candidate Tim Stevens is a Staff Therapist who would love to know how one gets licensed to do space therapy. Because Tim Stevens, Space Therapist! is an incredible title.

Earn Points, Get RewardsJoin NOW!
In this article: Gamora

Pick up the freshest kicks in the galaxy with the new Marvel's Guardians of the Galaxy Adidas Originals Sneaker Collection!