The Character That Helped Reshape the Marvel Multiverse

Review the long history of Molecule Man as you flip through 'Future Foundation' #3!

The Future Foundation will do anything to save Molecule Man.

Owen Reece—AKA Molecule Man—once helped reshape the entire Marvel Multiverse. Now his body is scattered across the cosmos—and the Foundation is out to put him back together. But they’re not the only ones... It’s a race across space as the Maker sets his sights on pieces of Reece in FUTURE FOUNDATION #3!

After he helped dismantle Battleworld and reset reality, the cosmically powerful being assisted the Fantastic Four and the Future Foundation in restarting the Multiverse. In just a few words, here's this unlikely power player's long Marvel history...

Introduced to the Fantastic Four by the Watcher in 1963's FANTASTIC FOUR #20, Uatu labeled him a threat to reality itself. Though he did not look imposing, the then-unnamed worked at Acme Atomics Corp worked as a lab tech. More focused on his complaints than his work, the man made a one-in-a-trillion mistake that changed him on the deepest level.

Owen quickly realized that he could control the very atoms around him by way of a wand! Reporting to his boss at Acme, he revealed his scarred face, but also his incredible powers, freezing the man who just fired him in snow and revealing his Molecule Man moniker. 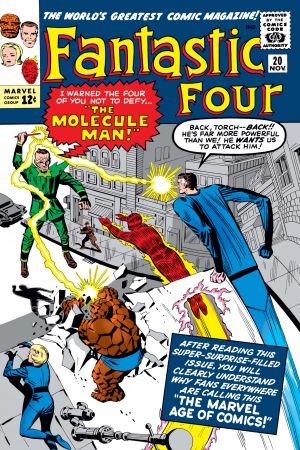 Though not one to interfere (much), the Watcher told the Fantastic Four of the menace Molecule Man posed and sent them back to New York City where the villain had already negated all natural laws of physics! The team jumped into action, but did not stand a ghost of a chance against the supreme power they faced.

Retreating to formulate an actual plan, the FF left Molecule Man to his own devices. Enraged, Reece held the entire city of Manhattan captive and ordered them to find Mister Fantastic, the Human Torch, the Thing, and the Invisible Woman.

Thanks to some unexpected help from a Yancy Streeter, the team made their way to Alicia Masters' apartment where Reed Richards realized that Owen's powers had no impact on living organisms. He hatched a plan that involved Alicia covering the FF in a thin layer of plaster before calling Molecule Man and tricking him into using his powers on it. Somehow Reed correctly theorized that doing so would cause a feedback that incapacitated the villain and caused him to drop his wand!

Using his stretching abilities, Mister Fantastic quickly snatched up the weapon just as the Watcher opened a portal and dragged Molecule Man away. Uatu thanked the heroes, returned the Big Apple to its original state and disappeared.

As we later learned in 1974's MARVEL TWO-IN-ONE #1 by Steve Gerber and Gil Kane, the Watcher placed Molecule Man in an alternate reality where time moved faster. He created a being who thought it was his son. When Reece seemingly died, the "son" spent his days building machines to help exact his revenge. Eventually he recreated the experiments that granted Owen his powers complete with the wand and ran into Thing and Man-Thing, but ultimately shriveled up because of the time difference between realities. 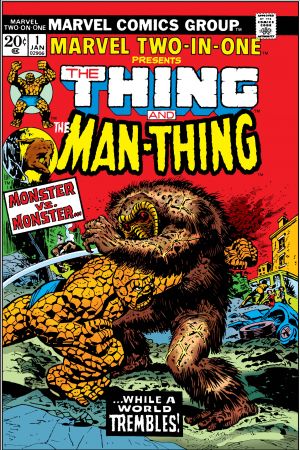 Reece, however, had placed his consciousness in the wand, which was now back in its home dimension. For a while, whoever held the weapon would get taken over by Molecule Man. Down the line, he regained his physical form and began thinking about his place in the world and whether he wanted the world to consider him a villain...

Now he's back. And the Future Foundation have to find him before he gets weaponized, once again, against the universe.

Read up on the latest Molecule Man tale at your local comic shop with FUTURE FOUNDATION #3!

In this article: Molecule Man