T’Challa aids the Avengers and Daredevil and goes solo to take on Killmonger and Venomm!

Captured by the Space Phantom and his temporary ally the Grim Reaper in AVENGERS #107, the Black Panther witnessed the two villains’ temptation of the Vision and their plans to secure a new body for the android. After being freed by Captain America in AVENGERS #108, T’Challa and his teammates welcomed help from the cosmic Captain Marvel to defeat the Phantom and the Reaper as well as the hordes of Hydra.

Following that adventure, the Panther faced off against the gigantic Imus Champion in AVENGERS #109 and received Hawkeye’s resignation from the team. When the team rallied again to aid the X-Men in their battle with Magneto in AVENGERS #110, T’Challa found himself buried under rocks by the mutant villain, prompting a scouting mission in DAREDEVIL #99 to secure assistance for another fight. 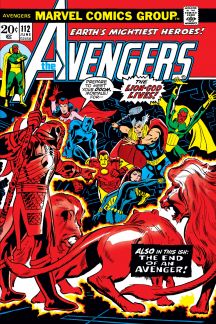 With Daredevil and the Black Widow at their side, the Black Panther and the Avengers finally put down Magneto’s latest scheme in AVENGERS #111, and welcomed the Widow into their ranks. Her tenure lasted briefly, though, for she left following T’Challa’s harrowing confrontation with the Lion God in AVENGERS #112.

After the so-called Avengers-Defenders War wrapped up with a big battle involving both teams as well as Loki and Dormammu in AVENGERS #118, the Black Panther returned to his native Wakanda in JUNGLE ACTION #6 to meet the revolutionary called Erik Killmonger and suffer defeat at his hands. Later, in JUNGLE ACTION #7, T’Challa looked into an illegal vibranium mine to gain a new foe known as Venomm. 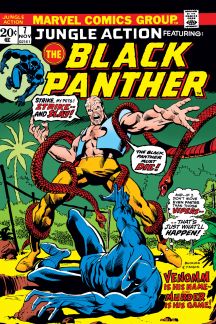 The Black Panther welcomed Captain America’s partner The Falcon to Wakanda in CAPTAIN AMERICA #169, and by CAPTAIN AMERICA #171 provided the hero with a high-tech rig to grant him the power of flight. Later, T’Challa stopped a new menace known as Malice from invading the royal palace to free the Panther’s prisoner, Venomm, in JUNGLE ACTION #8.

Returning to the States and the Avengers, the Panther aided Spider-Man in a conflict with Stegron the Dinosaur Man in MARVEL TEAM-UP #20, then joined with his teammates in battle with the Collector in AVENGERS #119, and a long campaign against the Zodiac in AVENGERS #121–123. In the aftermath of that fight, T’Challa helped activate a Zodiac weapon that unfortunately brought the dreaded, dragon-like Star-Stalker to Earth in AVENGERS #124. 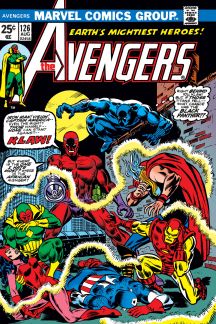 Next, the Panther served valiantly in an immense struggle between the mad god Thanos and Earth’s Mightiest Heroes in AVENGERS #125, and then a rematch with his old foe Klaw and the energy-charged Solarr in AVENGERS #126.