The Black Panther tracked down Kiber the Cruel in BLACK PANTHER #13, and when he uncovered the bizarre circumstances of his foe’s existence, deprived him of an energy source and allowed him to slowly die.

Later, T’Challa established a Wakandan embassy with ties to the United Nations in BLACK PANTHER #14, but his old opponent Klaw stirred up trouble while seeking to regain his power levels in BLACK PANTHER #15. The businessman-turned-villain Stinger got the drop on the Panther in AVENGERS #179 and attempted to capture all of Earth’s Mightiest Heroes to sell them to the highest bidders in AVENGERS #180. 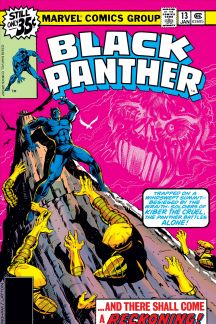 Government agent Henry Gyrich arrived at Avengers Mansion in AVENGERS #181 to announce that the team would be allowed only a small core group of members, of which the Black Panther discovered he didn’t qualify for. Spider-Man ran afoul of a fake Black Panther in MARVEL TEAM-UP #87, so he dug up the truth by enlisting the real T’Challa in a fight against Hellrazor, a crook hired by the unscrupulous Roxxon Corporation to defame the genuine article and bilk Wakanda of its resources.

The Black Panther began to realize he’d lost memories when Windeagle attacked him in MARVEL PREMIERE #51, but when the Wakandan monarch tried to set up Round Two with his flying foe, his opponent fell dead from an unknown shooter’s bullet.

The Black Panther went down to Georgia in MARVEL PREMIERE #52 on a hunt for stolen memories concerning the Dragon Circle cult. There, he uncovered a link between the group and the Ku Klux Klan, as well as the devilish entity known as the Soul-Strangler. After a battle with the creature in MARVEL PREMIERE #53, T’Challa regained his memories and brought the leaders of both groups to justice.

In DEFENDERS #84, a war broke out between Prince Namor’s home of Atlantis and the Panther’s native Wakanda in Africa, all over a misunderstanding. With the Defenders in the middle of the conflict, they hunted for the villainous Mandrill in DEFENDERS #85, and when they uncovered a trail that led to Wakanda, the team traveled to the country’s New York consulate to inform its king.

With the Black Panther on their side, the Defenders engaged the Mandrill and narrowly escaped from his death trap, while in DEFENDERS #86 the villain himself unleashed a stolen Wakandan device that blanketed New York in total silence. This brought T’Challa and the team’s attentions to stopping a riot brought on by the crushing confusion.

In MARVEL TEAM-UP #100, the Panther reunited with Ororo Munroe, known as Storm to the mutant X-Men. Together they confronted a dark figure from their shared past, the man called De Ruyter the Bull.