The Road to ‘Empyre’: What to Read Before Marvel’s Cosmic Conflict

Mapping the existing stories that will inform the building ‘Empyre’!

War simmers, ready to overtake the Earth! EMPYRE will spread its tendrils into just about every corner of the globe and leave no one unaffected, but why are the Kree and Skrulls teaming up to attack our planet?

ROAD TO EMPYRE: THE KREE/SKRULL WAR #1, written by Robbie Thompson with art by Mattia de Iulis and Javier Rodriguez, will lay down the groundwork leading to this war. But the event officially kicks off in EMPYRE #1, written by Al Ewing and Dan Slott with art by Valerio Schiti. Before that, there is plenty of Marvel lore in some all-time classic comics that might explain why these one-time enemies have united – and what that might have to do with the Earth and another semi-forgotten race, the Cotati.

A History of Violence

Though most fans will remember the shape-changing Skrulls who debuted in FANTASTIC FOUR #2 and the Kree who first appeared in FANTASTIC FOUR #65, the Cotati might be more of a mystery. Readers first heard about the Cotati in AVENGERS #133, when it was revealed that the telepathic plant-like race lived on the other side of Hala. They essentially ignored each other until the Skrulls landed and demanded that one race rule. Seventeen representatives from each race were taken to primitive planets and left for a year. While the Kree destroyed and built, the Cotati communed with the barren place to create a lush garden. Feeling as though the Cotati would win, the Kree slaughtered their leafy opponents to the outrage of the Skrulls.

Upon hearing from the Skrulls that Hala would never be a part of their empire, the barbaric Kree killed the green ones as well. At that point, the Skrulls were not warriors, but instead tried to spread their knowledge and resources peacefully. The Kree eventually figured out how to use the Skrull ship and used it to attack their own people.

However, instead of dying, the Cotati managed to sprout seeds and grow the next generation, which restarted their race in secret while the Kree continued their warlike evolution. Eventually, the Cotati became motionless and grew roots, but still communicated with one group of more peaceful Kree who transplanted them to other planets to keep them safe. One even made its way to Earth which lead to the birth of Mantis!

In AVENGERS #89-97, the teammates found themselves dealing with waves of turmoil from all sides. They eventually discovered that much of the trouble came from the ancient conflict between the Kree and Skrull races who were currently at war. When the Avengers truly got involved along with Kree captain Mar-Vell and his compatriot Rick Jones, the tables finally turned. Of all people, Jones wound up saving the day when Kree Supreme Intelligence gave Rick access to the Destiny Force, which allowed him to release an army of Golden Age heroes against the warring factions, ending this part of the conflict.

In the wake of the Kree/Skrull War, several Earth heroes -- Mr. Fantastic, Professor X, Doctor Strange, Namor, Iron Man and Black Bolt -- gathered together and formed the Illuminati. This group covertly traveled to the Skrull homeworld to pressure them to leave Earth alone. Instead, they got the drop on the heroes, tortured them, and extracted information that lead to another major moment in the history between these worlds.

The aforementioned Kree-Cotati-Skrull history lesson came during a larger story called “The Celestial Madonna,” thanks to a tour through time facilitated by Immortus. That epic came to a head in GIANT-SIZE AVENGERS #4 when Mantis and Moondragon both learned they had been similarly trained on different planets to commune with the Cotati and create a perfect human.

Having proven herself just that, Mantis was supposed to marry the oldest Cotati on Earth, which looked like a tree, and mate with the Cotati-possessed body of her late love, the Swordsman. Just after attaining total communication with the Cotati, Kang popped in and kidnapped her. However, Immortus thought that might happen so he had his minion the Space Phantom take her place. With that out of the way, Mantis and the sorta-Swordsman had a double wedding with Vision and Scarlet Witch officiated by Immortus! To celebrate, Mantis and the Cotati became pure energy and went off on their honeymoon which would eventually result in a child known as Sequoia, Mantis' full development into the Celestial Madonna and the green appearance she's most well-known for in the comics!

In the wake of the Trial of the Phoenix on the Blue Area of the Moon in the classic UNCANNY X-MEN #137, Bel-Dann the Kree and Skrull Raksor were left behind as seen in FANTASTIC FOUR ANNUAL #18. They battled fiercely day in and day out even after the time when the Inhumans landed Attilan on top of the old city. Eventually, they were told by each of their leaders that they would decide the entire war between the two races with the Watcher playing referee.

The fighting broke out and earned the attention of the Inhumans and the Fantastic Four who conferred with the Watcher. Together they developed a plan that manipulated the two warriors into besting the two Earth teams. With them defeated, The Watcher ended the competition and declared them both winners! Of course, this decision would not hold for long.

Unbeknownst to just about everyone, the Kree Captain Mar-Vell conceived a child with Skrull princess Annelle prior to the first Kree/Skrull War. That baby turned out to be none other than the Young Avenger known as Teddy Altman AKA Hulkling, though his true nature remained a mystery until YOUNG AVENGERS #9-12. In that arc, Teddy learned from the Super-Skrull that he was secreted away as a baby so the Emperor could not have him killed. She intended to bring him to Mar-Vell, but he had died. Meanwhile, his mother perished when Galactus consumed the Skrull homeworld in FANTASTIC FOUR #257, so the nurse took him to Earth and raised him thinking he was a mutant.

Super-Skrull wanted to place him on the throne and reunite the Skrull worlds, but he wasn't the only one looking for the boy – the Kree wanted him too. This led to a huge battle between the Kree, Skrulls, Avengers, and Young Avengers above Manhattan that eventually ended when Hulkling surrendered and agreed to spend half a year with each race. This turned out to be a ruse though, as Super-Skrull decided to take Teddy's place, allowing the boy to stay on Earth and continues his heroic adventures... for now.

In more recent times, the Skrulls and Kree retained their enmity, but had other problems to worry about. Going back to their encounter with the Illuminati, the shape-shifters moved further along with a plan to replace important Earthlings with nearly perfect Skrull copies. The Earthlings eventually caught on to this Secret Invasion and managed to fight back against the invaders. This event sowed a great deal of distrust in the hero community and led to Norman Osborn's Dark Reign, but it also returned characters who had been dead or missing for years.

Meanwhile, the Kree found themselves in a time of upheaval when the Inhumans of Earth made themselves the new Kree leaders. During WAR OF KINGS, the newly unified race faced off against another longtime threat, the Shi'ar and their new leader Vulcan, also from Earth. Even more recently, stories like ROYALS and DEATH OF THE INHUMANS have further influenced the Kree and their current status. 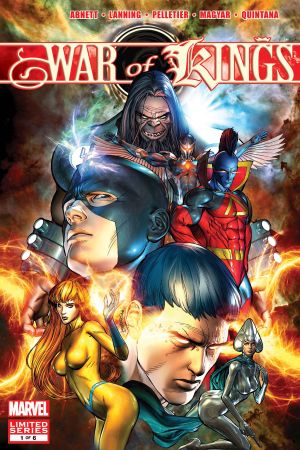 All of these events led directly into INCOMING, when a complicated murder required the attention of some of the best minds in the Marvel Universe. The victim turned out to be none other than Bel-Dann, who had been working on Earth with Raksor on a mission to bring peace to their races! Before dying, Bel-Dann left a message not to trust the trees.

INCOMING also showed Hulkling getting a call and agreeing to help. After spending one more hour with his boyfriend Billy AKA Wiccan, Teddy left and took the throne leading both the Kree and Skrull people! That would be great, except he then marshaled all their forces to attack Earth leading directly into the epic EMPYRE event!

So what’s in store for EMPYRE? Keep following Marvel.com/empyre for more news about this upcoming comic event!