This Is What Happens When You Invade Wakanda

Revisit when T'Challa and his people defended Wakanda from Super Skrulls!

K’vvvr might have had the most difficult mission in all of the Skrull’s Secret Invasion: invade Wakanda. Told in BLACK PANTHER #39-#41 by Jason Aaron and Jefte Palo in 2008, the story of his ultimate failure remains a true classic.

Though the invaders knocked out Wakanda’s power, the home team succeeded in doing the same to the incoming fleet. On relatively equal footing, the Skrulls only found bludgeons and swords to wield against their prey, but all of this fit in with T’Challa’s plan. “We’ve got them exactly where we want them,” he said before leading an army against the green-skinned aliens.

T'Challa’s true test came in the form of a Super Skrull with Bullseye’s aim, Danny Rand’s Iron Fist, Wolverine’s claws, Luke Cage’s impenetrable skin and fighting skills from Moon Knight, Shang Chi, Captain America, Daredevil, Elektra, and the Panther himself. The alien explained that he’d trained his whole life to take out Black Panther, to which T’Challa responded, “I have trained my entire life to face the unknown.”

Though he understood that the Skrull could easily outfight him, Black Panther knew that he needed to keep it up long enough to find the creature’s weak points—like the fact that it could only use one power at once. Using this information, the Panther snapped the Skrull’s arm, beat him senseless and snatched out one of his eyes. Defeated, that opponent was replaced by two more Super Skrulls to battle T’Challa: one a mix of Thor, Beta Ray Bill, and Loki, the other combining Hulk, Thing, Juggernaut, and other powerhouses. 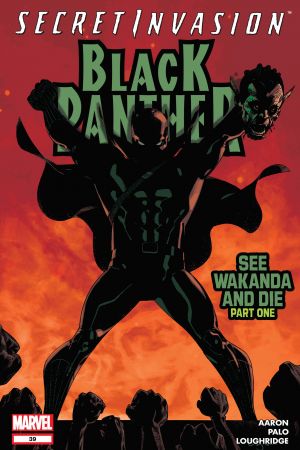 Black Panther did pretty well against his attackers until his enemies revealed that they used one last spy in Wakanda to capture Queen Ororo, otherwise known as the X-Man Storm, then T'Challa’s wife. Tied up alongside Ororo, T’Challa pledged to hunt down the entire Skrull race if they hurt his wife. After more boasting by the head Skrull, Black Panther told them all to go to hell at the behest of the queen before taking a horrible beating from the invaders.

Thanks to some voice modulators and other technology, T’Challa and Ororo switched places with their captors and infiltrated the leader’s quarters where they unceremoniously stabbed him through with swords. The Wakandans beat back the invaders and left a simple message in blood on the walls:

“This is what happens when you invade Wakanda.”

Ultimately, the difference between winning and losing this battle came down to the leaders of the respective sides. While T’Challa pledged himself to the continued safety and honor of his people, his counterpart had grown tired of waging war for a ruling body he no longer fully believed in anymore.

BLACK PANTHER #41 ended the volume launched by Reginald Hudlin in 2005. The writer soon after returned for BLACK PANTHER ANNUAL #1 from 2008 with artists Larry Stroman and Ken Lashley. That issue not only features the return of Solomon’s Frog from early in Jack Kirby’s BLACK PANTHER run, but also a look at a future in which T’Challa and Storm remain married and have a family. This issue not only looked back at the long view stance Wakanda took as the slave trade ravaged neighboring villages, but also ahead to a still never seen mega-conflict with the United States. The issue marks a nice endcap to Hudlin’s run on this volume, though he did return for to launch the next volume of BLACK PANTHER as well as a limited series called CAPTAIN AMERICA/BLACK PANTHER: FLAGS OF OUR FATHERS.